Does rngd -r /path/to/file inject into /dev/urandom in addition to /dev/random?

I'm new to the /dev/random and /dev/urandom pipes in general and have an application calling from /dev/urandom which I'm attempting to inject entropy into. I'd prefer not to change the source for this application, but an additional process calling rngd -r /path/to/file from what I can tell appears to inject entropy into /dev/random and increment the size such that it can unblock.

Now my question is: will rngd -r /path/to/file inject into /dev/urandom in parallel to /dev/random or is it limited to /dev/random?

If the answer is no, is there a similar utility which will inject into /dev/urandom - or even better - prepend bits to it such that the machine's PRNG is bypassed with the random entropy entirely in userland?

On Linux at least, /dev/random and /dev/urandom are basically the same thing; more specifically they are both interfaces to the same internal RNG, called the Linux Random Number Generator (LRNG), that share an input entropy pool; the only difference between them is whether or not they block when the LRNG is at low entropy.

According to the man page for /dev/random:

Writing to /dev/random or /dev/urandom will update the entropy pool with the data written,

On the diagrams below, writing to either device from user space will go into the main input entropy pool that is shared by both output interfaces. (article).

In the current LRNG design, /dev/random/ and /dev/urandom each have their own output entropy pool and entropy counter:

There is also a 2020 paper by Stephan Müller (the linux kernel dev who maintains the LRNG) that brings /dev/random and /dev/urandom even closer by having them also share the same output pool (source article): 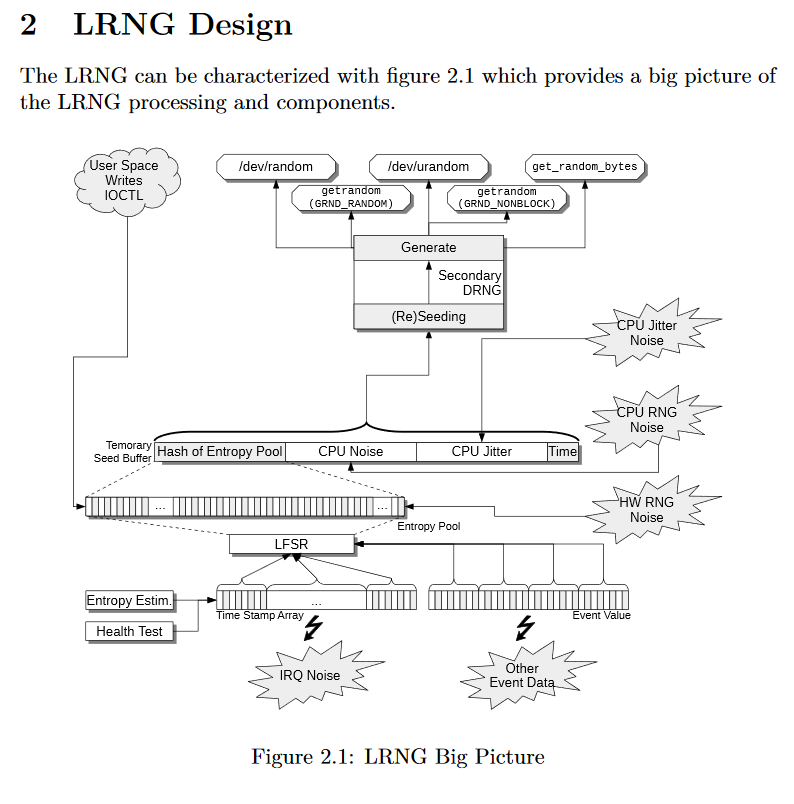 Summary: Yes, rngd is adding entropy to both /dev/random and /dev/urandom.

Not the answer you're looking for? Browse other questions tagged linux random entropy devrandom pseudo-random-number-generator or ask your own question.