The security of an SMB port exposed to the internet

I have installed a Windows machine with update 1909 (build 18363.720 (March 2020) (On which I try to find vulnerabilities with nmap), which includes smb 3.1.1 with the latest fixed bugs. I created a shared folder on this machine and made the various configurations on the firewall so that the shared folder can be accessed from the outside (private, public and domain firewall enabled and let connections access the share if the password is given). Of course with a password complex enough not to be cracked easily.

I then opened the smb port 445 (for smb 3) on my router, which I redirect to the local ip of this machine only.

(I also created a dyndns so that the ip updates of my router are updated automatically.)

I can already see people coming from afar saying that it's very dangerous to open ports directly on the internet, and they will be right (VPN is better, obviously). But I wouldn't like to have to have a debate about VPN.

"Is it secure enough for a small home system" to reasonably imagine sharing files, media and vacation pictures with colleagues (by being explaining to them that they just have to create a network shortcut on the network path of my dyndns), without having to worry about getting hacked in 3 minutes? Of course I will patch my system each time I find it necessary (2 or 3 times a year). It's also an easier way to set up file-sharing without having to install third-party tools like with NAS Synology etc.

Here are my target machine firewall configs associated to port 445

and here we see that domain, public and private are active 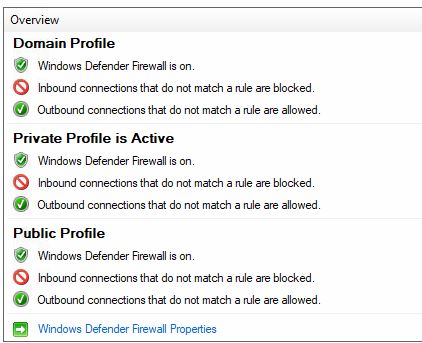 I did some tests with nmap in order to find possible flaws in the port I opened. Here are the results with vulscan and nmap-vulner.

Are there other tools which i can test to check the security of the smb server?

Would it be reasonable to buy extra hardware in order to enhance security?

Otherwise, should I just shut down my smb port and install a VPN with a NAS Synology or other hardware?

All your questions have nothing to do with Unix but I guess you want an input from experts so here it goes.

It is too risky to expose this protocol in a public network. There is a similar question that goes the other way arround: is there any reason to allow smb traffic over the Internet?

SMB has been consistently successfully attacked over the years, and even some of the exploits have even got their own name, website and/or theme song, like Eternalblue, SMBGhost or SMBleed. This occurs once and once again. Why exposing your assets? Even if you patch the server, or if you use some dedicated commercial hardware, it likely will found to be vulnerable to some new attack.

The solution of using a VPN to encrypt SMB traffic is better, in that case, your port should not be exposed. There are other solutions like using other protocols altogether, like SSH.

Not the answer you're looking for? Browse other questions tagged windows nmap smb or ask your own question.

8
Is it risky to allow SMB traffic to the Internet