Should you let yourself ssh into every machine in your network?

I am wondering how you should setup your network (AWS) so you can debug different things that might occur. Obviously there's logging, but it seems at some point you might require SSHing into the actual machine of interest and checking around. If this is the case, it seems you would need to open up port 22 on every machine in the network. To make it secure, I would only allow bastion host to connect to my IP address, and then every other machine only allows connections from the bastion host on the internal network. Is this considered bad practice? If so, what is the right way to go about this situation?

This is a great question becuase this is a common concern I deal with. I will give some answers into what you should understand and what I would do.

So between these point what I would suggest if its that much level of security that you want is that you may want to look at something called SSM. SSM is an agent that is installed in your instances that monitor the instances, you can block all ssh access including in a provate subnet. And you can only connect trough it via the AWS Console (Picture below). You will not need a bastion host nor opening your instances up to the world via an ssh port. Which means you will save costs and also provide better security. Another point is you will have full to the instances (logs, healthcheck and control) trough the IAM which you can authorize which user or resource has accesss to it. 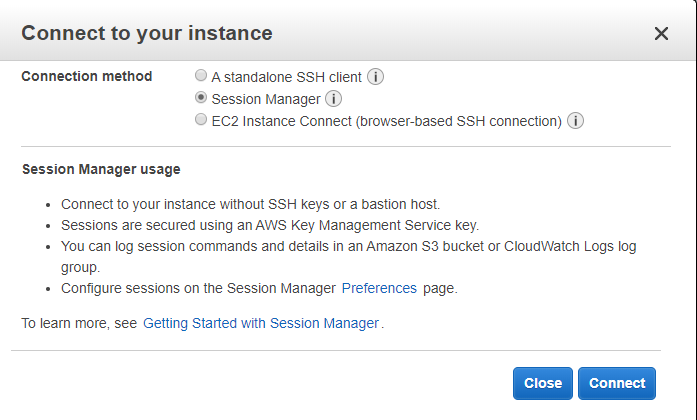 Observation : These are all in a private subnet and I use an Internet Gateway to download dependencies from yum.

Not the answer you're looking for? Browse other questions tagged network ssh ip aws or ask your own question.

26
Is starting an AWS instance with only ssh to port 22 significantly insecure?

3
Filtering network access on a user/group/process basis
16
Two-factor authentication with ssh key authentication and yubikey?
1
How do I determine where ssh login attempts are coming from?
2
Managing SSH key access to AWS servers behind bastion
3
Should a VPN user be allowed to bypass a SSH jump host?
2
How much security does double VPN layer adds?
6
Is it possible to hide your MAC address before connecting to open wifi?
0
How do you get a secure bastion host if your IP address is constantly changing?