What's the deal with X25519 Support in Chrome/Firefox?

An online list of software supporting Curve25519 list both Firefox and /Chrome as supporting it for TLS.

I did an experiment and created a self-signed TLS cert with Ed25519. Both Chromium 84 and Firefox 79 complain about not being able to negotiate the cipher list/version. I've also noticed that they initiate TLSv1.2 handshakes when connecting to localhost, but use TLSv1.3 handshakes when connecting to google for example. wget on the other hand, has no problem connecting (I used --no-check-certificate, but afaik that shouldn't matter here)

I then looked at the TLSv1.3 handshakes. neither browser offers Ed25519 as a signature in their ClientHello (even when connecting to google via TLSv1.3). Again, wget does offer it as part of the ClientHello.

So I figured this might be a platform issue with my distro (Fedora), but this Blog Post also claims that the major browsers don't supports X25519. While ChromeStatus says it's been supported since Chrome 50 (I'm assuming chrome and upstream chromium do not differ in this).

I'm totally confused. What's the current state of X25519 support on major browsers? is it a google chrome vs. upstream chromium issue?

While you seem to quote from the RFC the phrase in question is actually significantly different from what you quote:

But what you tried is using a certificate with an Ed25519 based public key for authentication which is completely different from using X25519 for key exchange. X25519 key exchange seems to be actually implemented in the browsers, but Ed25519 certificates not.

... neither browser offers Ed25519 as a signature in their ClientHello

Also, There's more than one place where the supported algorithms for different aspects of the protocol are listed in the handshake.

Comparing the handshake for wget and chromium: 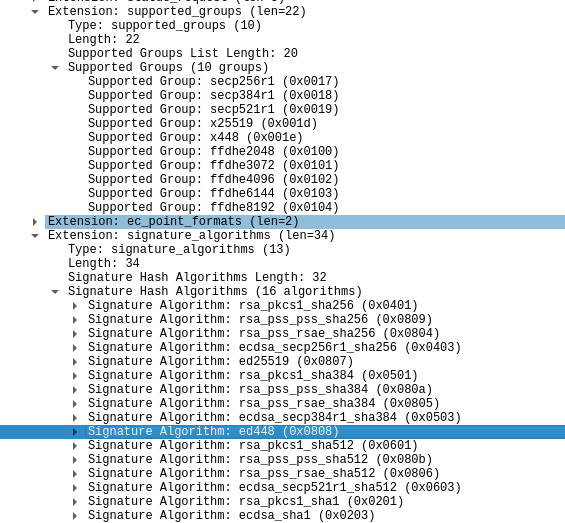 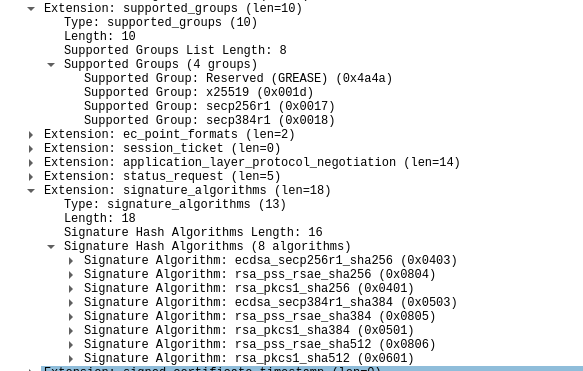 The curves supported for key exchange are passed in the supported_groups extension. As the screenshot shows, Chrome does offer X25519 there.

There are two other extensions in which ED25519 may appear.

First, the CertificateVerify extension which is used to sign the handshake. The "supported_signatures" extension declares which signature algorithms the client supports.

Second, there are the signature algorithms supported for certificates. According to the RFC, this should be declared in a "signature_algorithms_cert" extension, but according to section 4.2.3:

1
Issuing browser certificates to Chrome and Firefox with Microsoft CA
5
Browser security - Firefox + NoScript is better than Google Chrome?
37
Can someone explain what exactly is accomplished by generation of DH parameters?
5
Different SSL states as seen by Safari, Chrome and Firefox
4
Firefox & Chrome Strong Ciphers
8
Why are certificate chains different in Firefox and Chrome?
6
Is the native sandbox of Chrome and Firefox enough or would SELinux improve its security?
40
Can a browser extension (Chrome, Firefox, etc.) read the web console log?