Why is social engineering often excluded from bug bounties?

I noticed a lot of companies do not have social engineering as in-scope of bug bounties/responsible disclosure guidelines, even though it is often used in real-world attacks. I understand that for popular bug bounty programs the amount of social engineering attempts would probably become problematic, but for small companies I would see it as beneficial to once in a while have someone try to get into the systems via social engineering as this would keep everyone sharp.

Are there reasons I am missing here for excluding this from allowed methods?

Because Human Factor vulnerabilities are complex, undefined, non-linear, and often not repeatable in a predictable way. Being able to successfully soceng one person is not enough for an organisation to use as a basis for action. In short, if you could do a soceng test, the results would not be useful.

SQLi on a web form, on the other hand, is simple, defined, linear, and the results are repeatable.

Bug bounties are for technical issues, not "all possible issues that could possibly go wrong".

SocEng also creates massive liabilities that include the individual, and that brings in a host of other issues. How far do you go? How much personal information do you gather and weaponise? How do you get permission from the person and still keep the test legitimate? Permission alone places this activity beyond a simple bug bounty program.

Testing Human Factor vulnerabilities has to be done carefully, by professionals who know what they are doing, and the scope is very tightly defined. That's why soceng tests tend to keep to phishing simulations; it's very complex and there are a lot of side factors to take into account. It's not something for some random bug bounty tester to go mucking around with.

The goal of penetration testing is to obtain actionable results - to have someone find vulnerabilities that the organization did not know that they have, but could fix if only they know that they exist.

You can (and possibly should) run some awareness campaigns, but you should expect that a good social engineering attack will sometimes succeed anyway even if you have done everything that reasonably can be done. An user falling for an attack does not mean that the awareness campaigns were flawed or too limited or that the particular person has 'failed a test' and needs to be penalized (if this seems contentious to you, this is a longer discussion for a separate question).

It may be an "assume breach" strategy (which is useful when trying to mitigate insider attacks), but not only that - it can and should also involve technical measures to prevent the breach that assume that the user-facing part may succeed but prevent the attack from getting to the user (various measures to limit spoofed emails or websites), prevent the attack from succeeding even with user 'cooperation' (for example, 2FA systems that won't send the required credentials to a spoofed login page), or mitigate the consequences of the attack (proper access controls so that a random employee compromise does not mean compromise of everything, endpoint monitoring, etc).

You can test attacks and response without involving the users

You can do simulated "social engineering" attacks to test your response without any actual social engineering that harms the actual users in your organization (because, to emphasize this, even simulated social engineering attacks do cause harm to the users they target and victimize). You can test your ability to detect and respond to spearphishing by targeting an "informed accomplice" in the organization that will intentionally click whatever needs to be clicked (because we already know that this part succeeds often enough) if the existing systems and controls in place will allow the payload to get to them, and see how your response works, there is no need to mass-target unwitting employees to gain the same benefit to the systems security audit.

And you can test your ability to mitigate the consequences of social engineering attacks by starting the penetration test from a foothold in your organization - you can give the penetration testers remote access to a workstation and an unprivileged user account credentials (assuming that this would be the result of a successful social engineering attack), you don't need to disrupt the workday of a real user to do this test.

Social Engineering most commonly takes the form of manipulating, bullying or lying to a company's employees, and offering a bounty for it would be to invite this torment on your staff. Valid customer-service calls would be outnumbered by bounty-hunters berating call centers trying to talk their way into other's accounts; VIPs' office staff would be inundated with calls pretending to be from their bosses. Actual customer service and productivity would plummet under the sheer volume.

Social engineering is a human bug so you need to patch your humans via training, reprimands, etc...

This question really makes me think of Facebook and how they implemented a giant warning in the developer console: 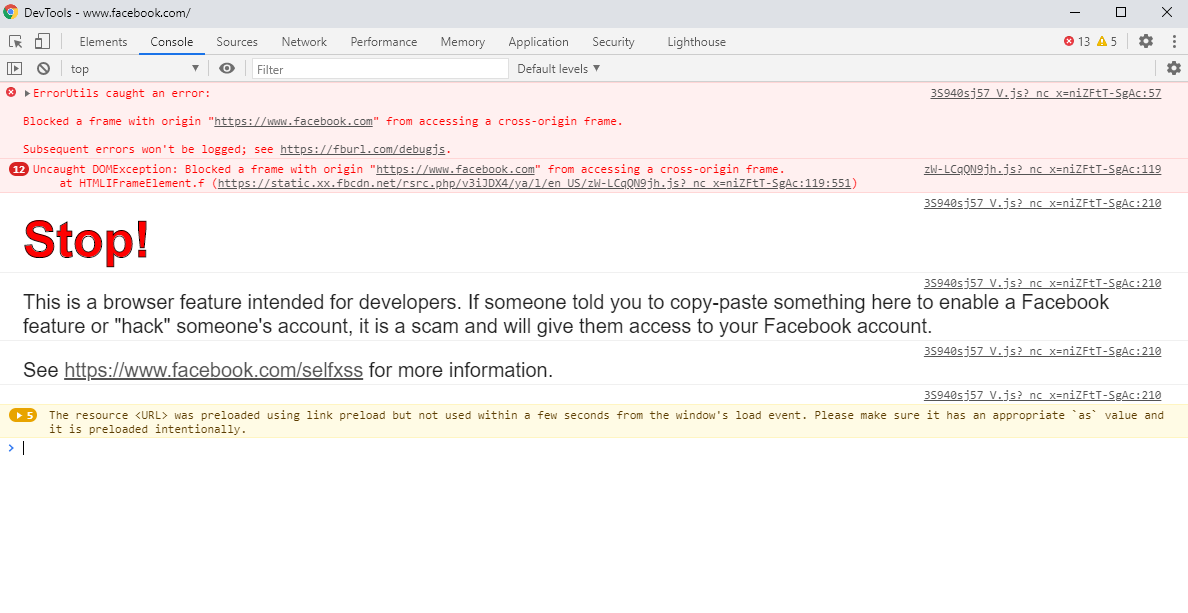 Do note that the warning is only as effective as the user's comprehension skill so you might have to individually patch each user. Hopefully, this paints a better light as to why bounties are not offered on human manipulation.

Not the answer you're looking for? Browse other questions tagged social-engineering bug-bounty or ask your own question.