MacOS's Finder (and Xcode) accessing iDevices while network was off

I am trying to figure out what is wrong with my Mac.

Here are my devices:

All devices connected to network / Internet via the same WiFi router.  But the Mac’s connection is wired (Ethernet Cat5 cable).

So, I sent an email to Apple product-security email. I got a response back a day later saying that “Regarding the issue you reported, we have examined it and determined that it is best addressed via Apple's Support resources which may be found at https://www.apple.com/support/. “ And another link to AppleCare site.

I assumed that they were telling me this issue is unique to my system.

So I decided to dig in. My first intuitively suspicious is Xcode would have the same phenomenon because it probably used the same mechanism to accessing iDevices. I carried out testing with Xcode and it indeed expressed the same behavior.

Next I wanted to eliminate this uncertainty: using macOS Catalina Patcher from dosdue1. I installed High Sierra (latest 10.13.6) into an external USB drive. With this setup, my Mac system should be conformed to Apple’s for the Mac mini mid2011 with proper MacOS at the time it was still being support. The Finder under High Sierra does not support accessing iDevices via WiFi yet. But Xcode does. And I discovered that Xcode also has this phenomenon as described earlier. To minimize any possibility of cross contamination or from Internet, while in High Sierra I did not install any software other than Apple’s security latest update. But I did goto Apple’s developer site to download Xcode v10. And I did boot back to Catalina to export my Xcode certificate so to import into the new Xcode under High Sierra.

Here are my conclusion: Do you agree?

Since I do not plan to get a current Mac. So I would not be able to determine if any current support Mac hardware experienced this phenomenon.

Edited2: It seemed like if I turn off IP6 on the Mac then this phenomenon is gone. I got the hint from the ifconfig listing in that IP6 address was still available while IP4 address has gone when the network is off.

Edited 3: After further investigation with hints from comments, I discovered that IP6 was still active even after one turned off the Ethernet as in Network Preferences. Because IP6 was located in another menu: “Advanced…”. If one goes into the this Advanced… menu, the IPv6 is in a separate dropdown (pic2). The only way to turn off the network completely is to go into the Advanced… menu to select Configure IPv6 as Manually (pic3) and leave all fields blank.

So my conclusion is this was by design. That is fine. Except this is misleading. In the Network window (pic1) the Ethernet indicator light is red when you turned off Configure IPv4 while IPv6 is still active. In my opinion, this should not be the case. Simply, this indicator light is for the Ethernet connection: Both IPv4 and IPv6. Unless Apple decided IPv6 is not part of Ethernet. In that case it needs to create another indicator light.

And Finder and Xcode do use IPv6. 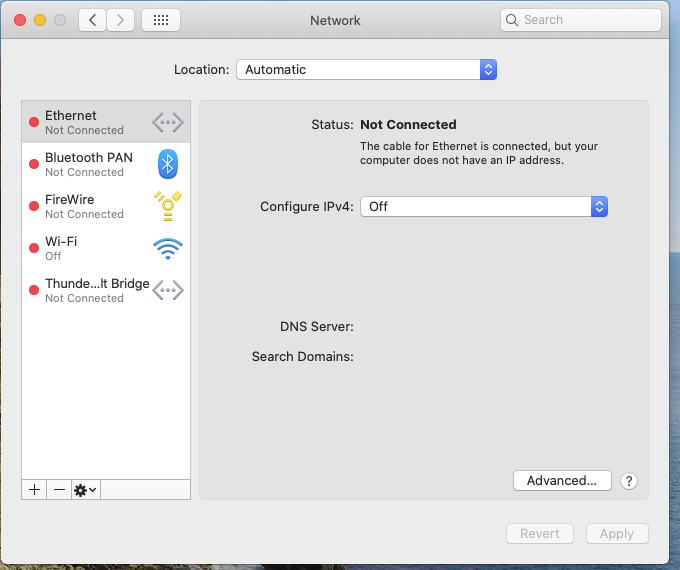 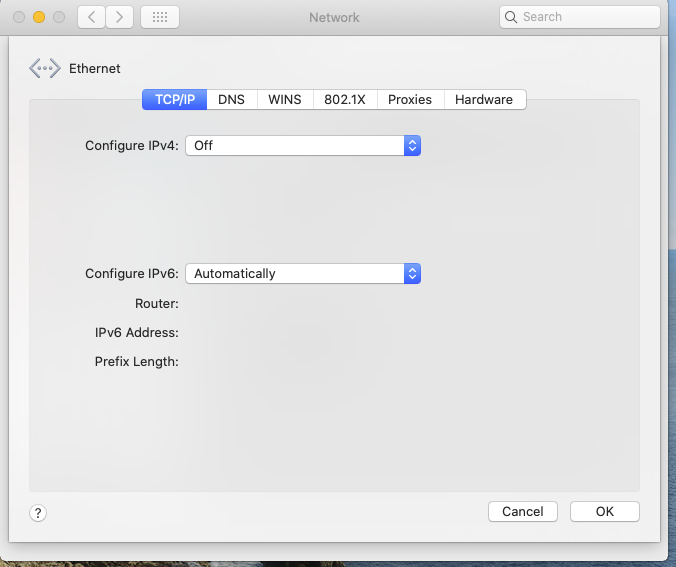 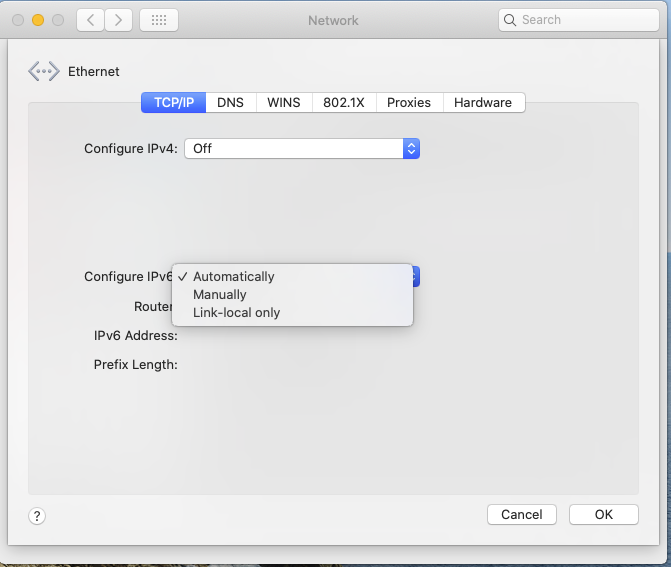 So the en0 interface, which is presumably your Ethernet conncetion, is up with a valid (link local) IPv6 address set. If the other iDevices have Link Local Addresses set as well, they will be able to communicate via IPv6 with your mac.

You may argue that leaving the computer listening to the network when you've disabled it may be a vulnerability, but it's probably by design, and not something Apple would consider a security issue.

Not the answer you're looking for? Browse other questions tagged network macos firmware system-compromise apple or ask your own question.

4
One computer on our network was hacked and stole hundreds of accounts on different websites - what are correct steps to take?