What aspects of image preparation workflows can lead to accidents like Boris Johnson's No. 10 tweet's 'hidden message'?

The BBC reports that the image Boris Johson posted on Twitter to congratulate Joe Biden contains traces of the text "Trump" in the background. The BBC article links to a Guido Fawkes' article, and when I download the tweet's JPEG, convert to PNG with macOS preview then subtract a constant background, there it is!

When I do a similar check on the blanked out area in my image in this post I see nothing, i.e. it worked.

My goal there was to show an image of a battery but to ensure that no personal information like the battery's serial number would be visible or detectable. Sharing that on the internet might be a small but nonzero security issue.

I breathe a sigh of relief but then wonder for future reference, in order to be sure that blanked out areas are fully blanked out:

Question: What aspects of image preparation workflows can lead to accidents like Boris Johnson's No. 10 tweet's 'hidden message'? What are the most prominent things to avoid doing in order to avoid accidental hidden residues like this? 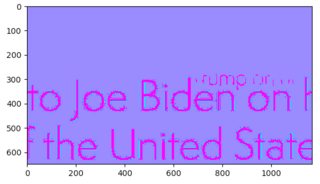 At first I thought this was simply a hoax as no digital image process I'm aware of could do this by accident, but I was intrigued.

Taking the orignal image and performing an equalize on it did indeed pull out the alternate fragments. It also revealed the black background to be not really black but a composite of dense subtractive primary colors.

Here's a crop of the equalized image: 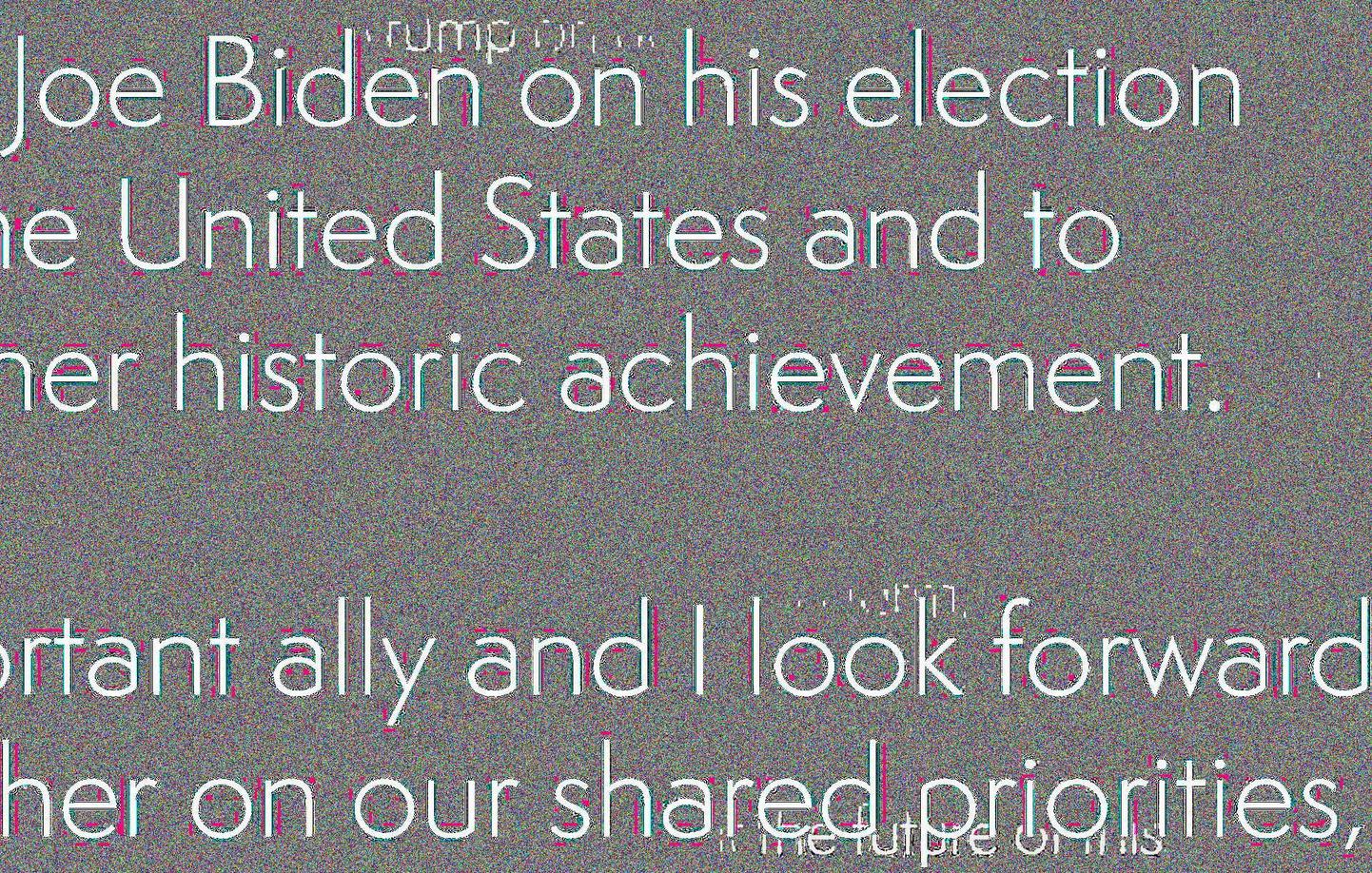 I'm pretty sure this error came about because the message was Printed on a Color Laser Printer and photographed (or scanned).

The "hidden message" is a result of a previous print leaving a tiny bit of toner on the drum which was picked up by the next print. This is most common in duplex capable printers.

So how do you prevent it? Don't photograph paper to produce digital content.

The most likely explanation is that the old text was removed by using a fuzzy or smooth eraser tool.

In the image below I have only increased brightness and contrast to make the "hidden message" more visible. Nothing fancy. The slight red tint is only due to the fact that the black background of the original has a very slight red tint to it. 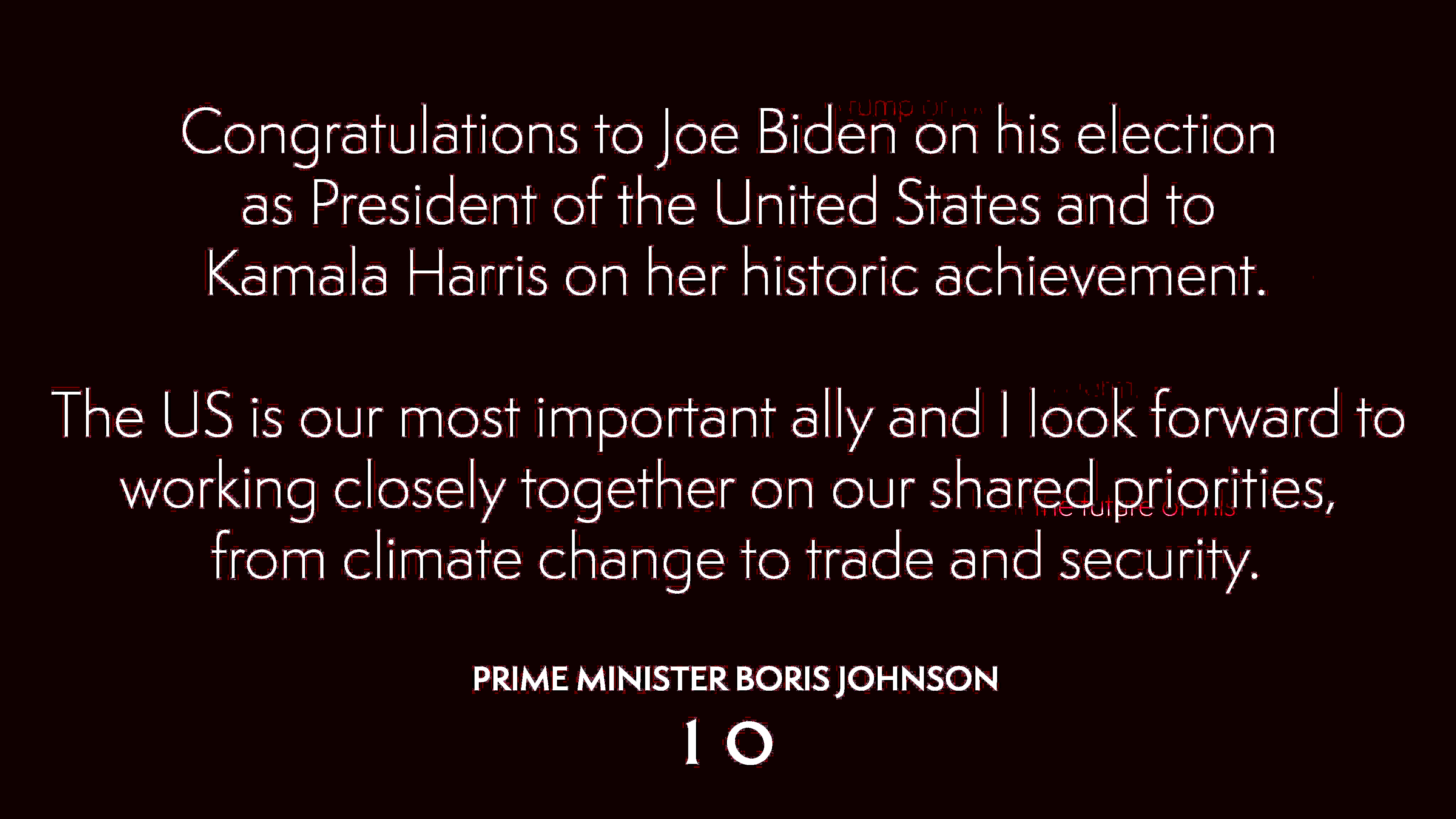 As you can see there is a very clear gradient in the most visible hidden text fragment (under "shared priorities"). The other fragments also show some signs of gradients, but there are no gradient effects used in the text about Biden.

These seemingly random gradients together with the fact that the "hidden message" appears to consist of small random fragments of a much larger text makes me think that whoever made this picture removed the old text by using a fuzzy eraser tool. They manually swiped the eraser tool back and forth over the text until they didn't see the old text anymore. But the fuzzy eraser tool doesn't remove everything if you pass over quickly just once. This is by design to avoid sharp edges in an image.

In the picture below I have swiped a big fuzzy eraser back and forth a few times over the original image to show what the results may look like. Obviously, in my picture some parts are still a little too visible, but I still think it gives a good idea of what type of effects this could cause. 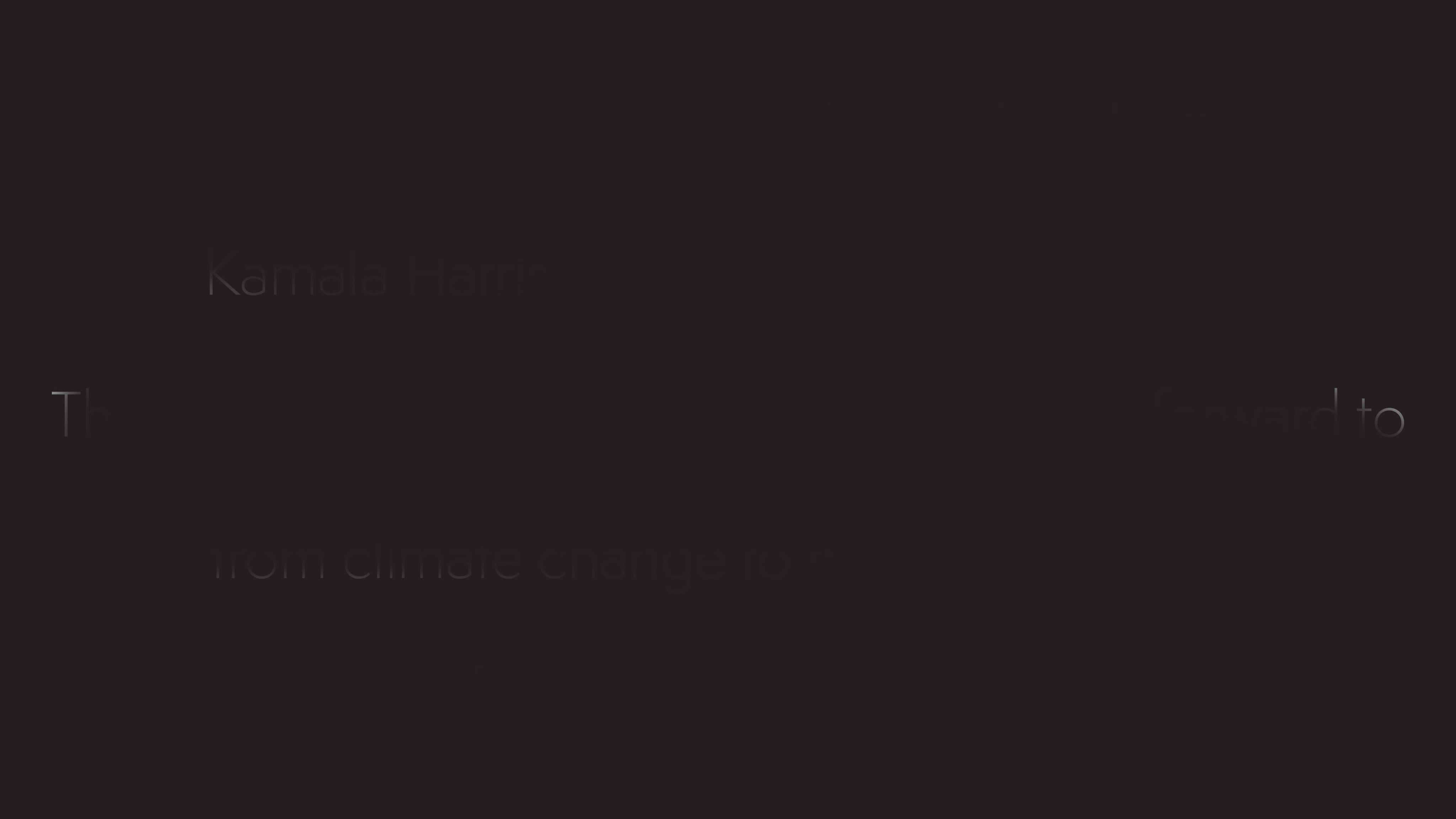 Don't use a fuzzy eraser tool to remove things you want to remove completely. In this case there's no need to use an eraser tool at all. Just fill the whole image with the background color, or maybe even better, just create a new image from scratch. The only thing they wanted to keep was the size and the background color and that should only take a few seconds to replicate in a new image.

As requested by @Tristan in a comment, I have tried to replicate the process completely. Here is a picture where I have removed the Biden/Kamala text with a fuzzy eraser tool and then placed a new text on top of it: 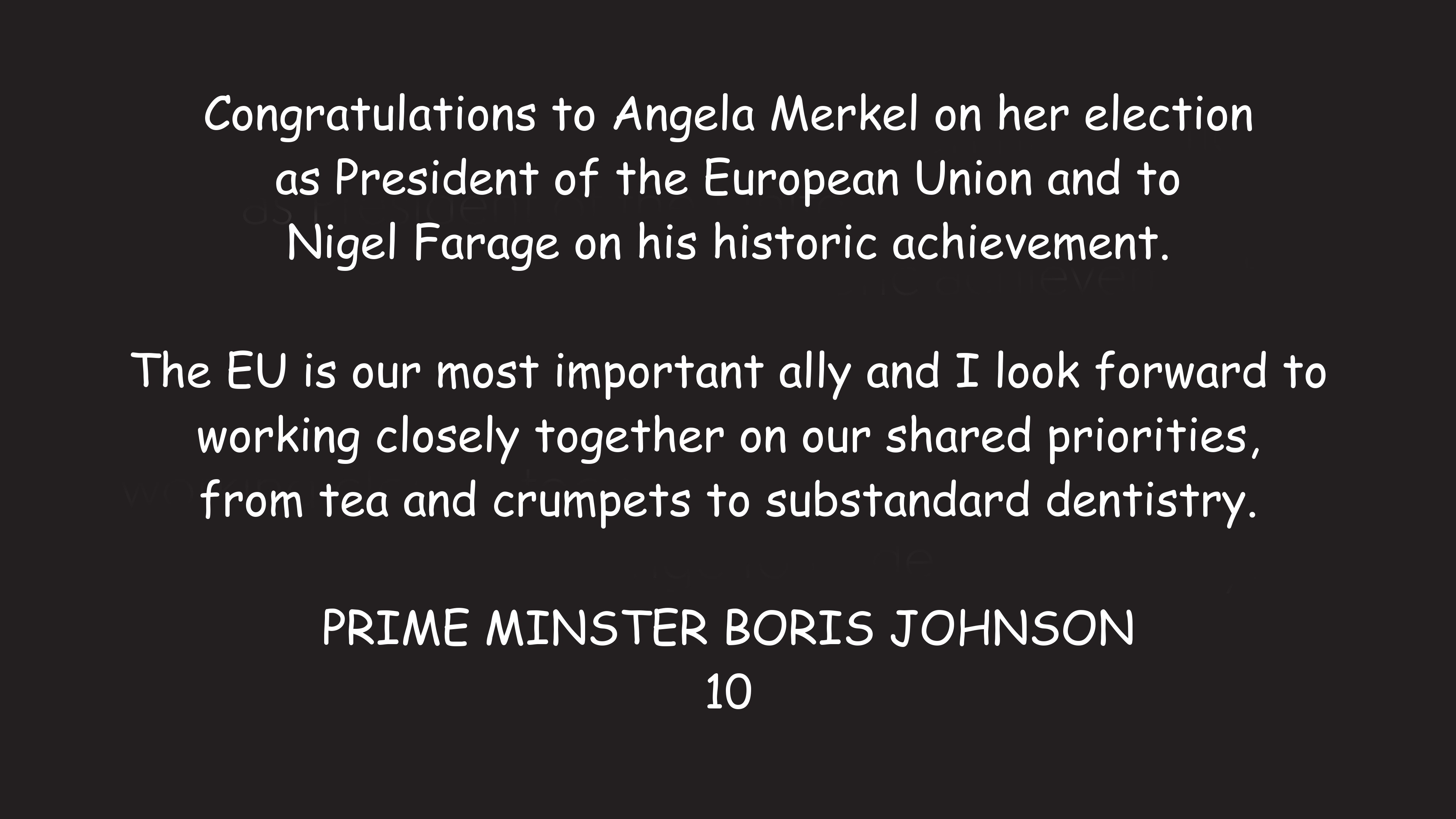 And here is the same picture but with increased brightness and contrast to highlight remnants of the old text: 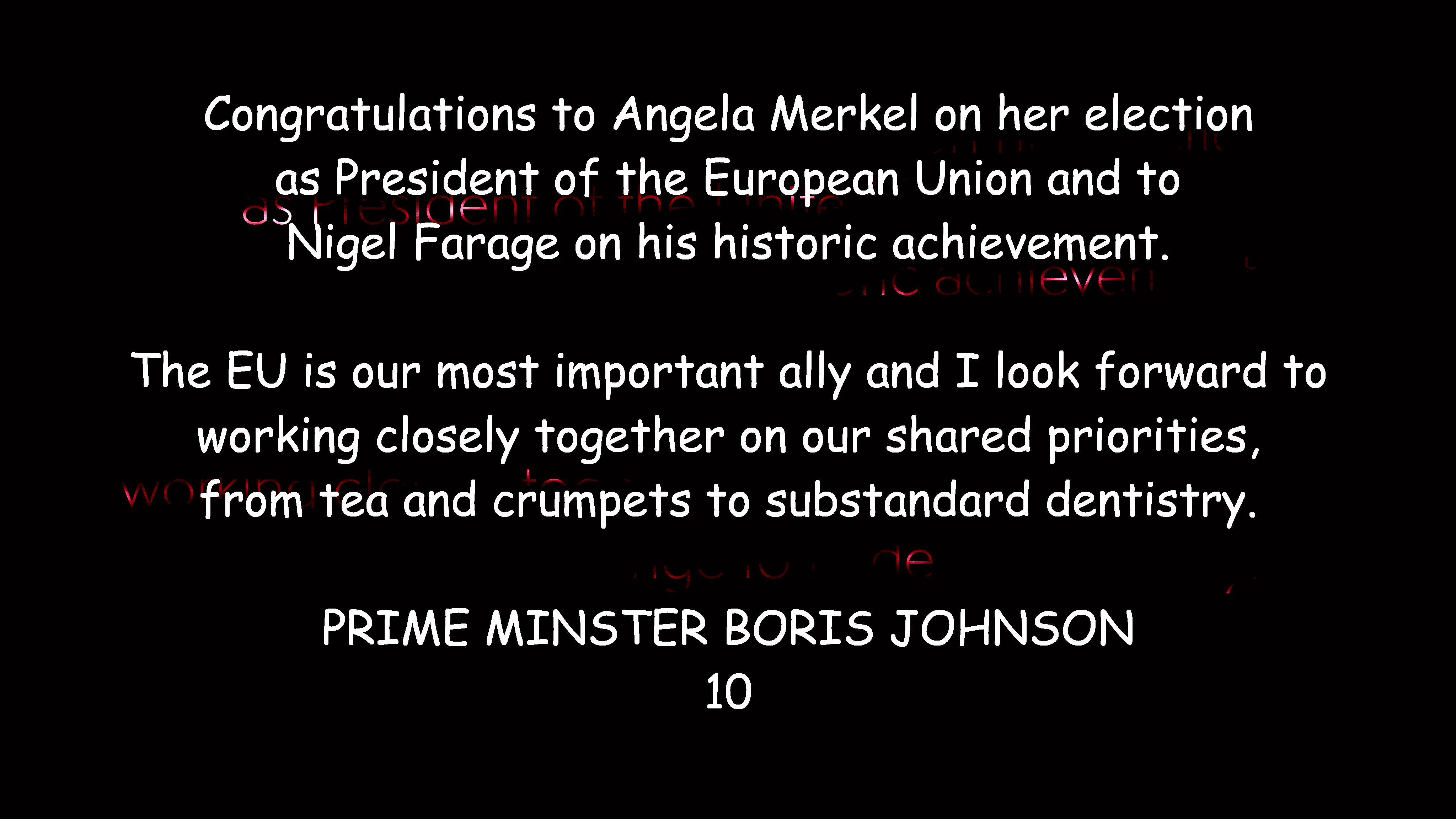 I expect the explanation is fairly mundane. An image was probably prepared with 3 layers:

You could then produce both messages with the same look by hiding either layer 2 or layer 3. I imagine what happened here is the person preparing the images hid layer 2 by reducing the opacity and accidentally set it to nearly 0 rather than 0. Add in a liberal sprinkling of JPEG compression artefacts and you get the result seen in the tweet.

Following this process and creating a JPEG results in an image like this:

I'm sure you could fiddle with the level of opacity (I used 1.6%) and JPEG quality and get a result where the alternative text was less visible to the naked eye but still present in the image.

Here is an example with a lower opacity value, I've also added "small text" in a smaller font partially overlapped with "Biden", the smaller text is swamped by the JPEG artefacts whilst "Trump" survives.

You can avoid this by preparing two separate images or just by being a bit more careful when using layers in one image.

While probably not the cause in this specific case, in theory it could also be a result of using a tool deliberately leaking redacted information.

In 2008 Underhanded C Contest, the participants were asked to write an image-editing tool leaking information about image parts redacted with (traditionally black) rectangles. And to do that in a stealthy, deniable way.

4
Found my iPhone 6 somewhat open (possibly right after airport security), what (if anything) might have been done to it?