How can a certificate be valid in the Hybrid Model but not in the Chain Model?

All dates in European format!

I am learning about validity models, but the solution for this assignment confuses me. 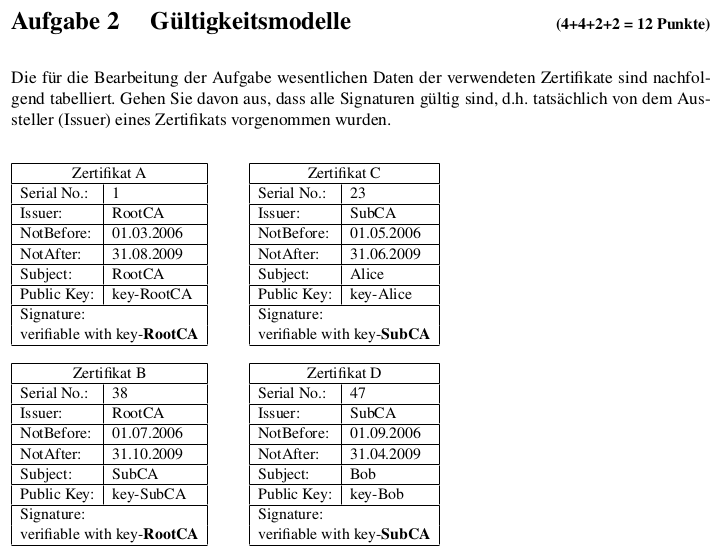 The relevant data for the applicable certificates are shown below. Assume that all signatures are valid, that means: they were issued by the "Issuer" written in the certificate.

You want to verify the signatures of Alice and Bob [note: I did not copy the table for Bob] on 1.2.2010. Fill out the table with "gültig" or "ungültig" for valid and invalid results, respectively. 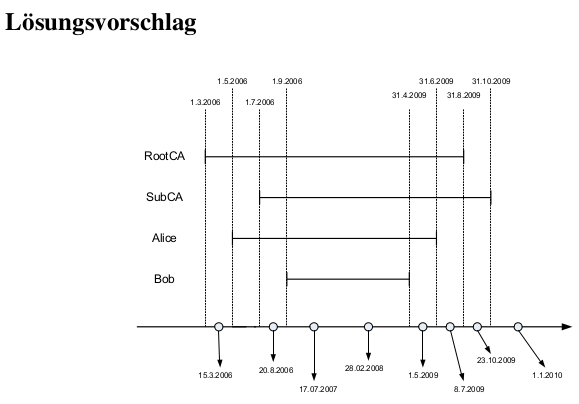 I don't understand how a certificate can be valid (gültig) in the Hybrid Model, but not in the Chain Model (Kettenmodell) [see first line of the solution table].

Alice is the end-entity, and the validity of her certificate should be independant of Bob. But according to the first line of the solution table, the signature is invalid on 1.2.2010 even if it was created on 1.5.2009, when Alice's certificate was still valid.

There is the time of signature, and there is the time of verification. Let's first simplify the situation: we assume that the current date is 2009-07-08. For that value of "right now", the RootCA and SubCA certificates are still valid, but Alice's certificate is not. You see a signature which is purported to have been produced by Alice on 2009-05-01.

If you try to validate Alice's certificate, you will find it to be "expired" and, per X.509, that's the end of the story (section 6.1.3, step a.2). Possibly, there could exist a proof that the signature already existed at a past date, e.g. 2009-05-02; time stamps can be such proofs. At that date, Alice's certificate was still valid, so you could virtually imagine yourself looking at the signature and the certificates on 2009-05-02, and running the validation algorithm at that time. If you were convinced of the signature validity at that time, you would still remember it now. This is the basis of past validation.

But can you really time-travel like that ? There's the trouble with revocation. In a generic way, how would you know if Alice's private key was stolen ? Imagine that, on 2009-04-15, an evil individual (let's call him Albert) purloined Alice's key. Surely, a signature computed with that key on 2009-05-01 cannot be undoubtedly attributed to Alice, since Albert could have computed the same. In X.509, information about stolen keys ("compromised keys" in X.509 parlance) is distributed through revocation. The CRL published by SubCA would include Alice's certificate with a "revocation date" of 2009-04-15 (the theft might have been discovered only a few days later, but the CRL format includes a field which state the cut-off date). Now is the tricky point: a CRL produced at date T includes information about certificates which are still valid (as per "validity dates") at date T. On 2009-07-08, the CRL currently published by SubCA does not include Alice's certificate because Alice's certificate is expired, and you cannot know if it was revoked at some point or not.

Therefore, for past validation, you need more than a time stamp on the signature; you also need a time stamp on some revocation objects (CRL, OCSP responses...) which were issued while Alice's certificate was not expired yet.

In the discussion above, you see the two essential tools:

All the validation "models" are just elaborate ways to dance around these issues, by ignoring some possibilities of key compromise. For instance, one would consider that a theft of the root's private key would be known anyway, even beyond the formal root "expiry", and that the end-of-life date for the root is just an administrative matter. If you begin to ignore some possible security issues, depending on a so-called "model", then it is not surprising that some signatures will be considered valid, or not valid, depending on the model.

Yet, as presented, your problem is very incomplete since it says nothing about time stamps, CRL, and time stamps on CRL.

Not the answer you're looking for? Browse other questions tagged certificates public-key-infrastructure trust validation or ask your own question.

2
Client Authentication Certificate Not Expiring, but "parent" cert IS
2
XAMPP/Chrome net::ERR_CERT_INVALID on VALID Certificate Chain
7
what are the risks associated with an incomplete certificate chain
2
How does verifying the chain of trust for certificate based authentication work on the server side?
2
TLS: Clarification on trust in the certificate trust chain
1
How may I check if an expired certificate was valid at the time?
1
What happens if one certificate path is valid while the other one is not?
0
Certificate not valid for common name?