How does this unsigned exe launch without the windows 10 SmartScreen warning?

So, I have been working on my own project for which I have been looking into certificates and such. While browsing reddit I found a game which I can launch the exe file, expecting to get a Windows 10 warning message, such as occurs for most games on itch.io, and for my own unsigned applications. To my surprise however, the game just straight up launched without any Windows 10 SmartScreen appearing. This is despite the program not appearing to have any digital signature in the file properties.

I can only think that it was signed, but for some reason it is not showing that the program is signed.

The game was MidBoss (a legitimate game which is on itch.io and steam) which I downloaded the windows main from: https://midboss.net/classic/

I expected to get a warning like this, but no warnings whatsoever were displayed. 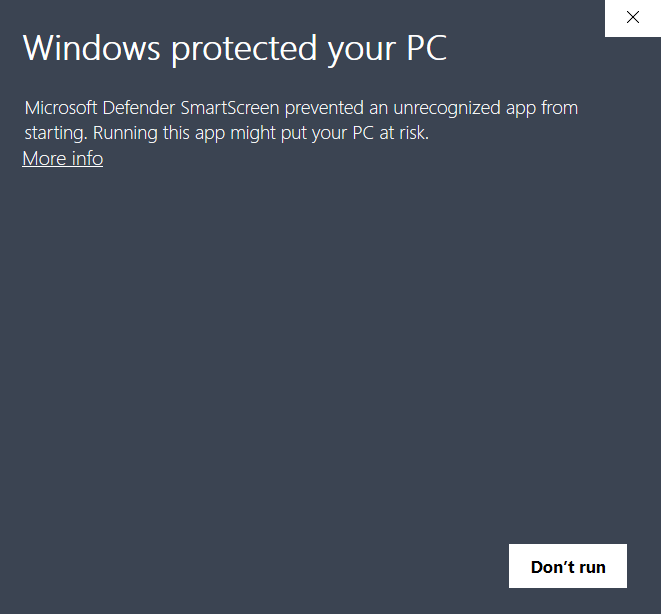 The properties of this application have no digital signatures tab.

Unlike this application which has been signed.

Windows Defender Smart Screen blocks or allows applications based on reputation. The reputation can be either for the application itself, or for the certificate used to sign it. Usually developers sign their code so their Authenticode certificate can build reputation and they do not have to repeat the reputation building process every time they issue an update for their application.

However, an executable (whether signed or unsigned) itself can also build reputation, which seems to be the case here. Enough people have used this particular executable safely that Smart Screen is now confident that this executable is not malicious.

Not the answer you're looking for? Browse other questions tagged certificates digital-signature windows-10 or ask your own question.

13
Encrypting local HTTP traffic using a self-signed certificate
1
How secure is my private key in the Windows Digital Certificate store?
3
Why a self-signed digital certificate (X.509) cannot be altered?
3
Digital signatures and truly validating what was actually agreed to
23
Deprecation of SHA1 code signing certificates on Windows
2
How to make my homemade program not come up with security warnings?
10
How to prevent Firefox and Chrome from opening ports in the firewall?
2
USB device security in Windows