Is it possible to compromise a mobile phone just by using the telephone number?

In a recent tweet, a prominent UK journalist has claimed to have witnessed a European police force accessing content on a mobile phone just by using the telephone number.

Are there any known technology or attacks that could do such a thing?

For clarity, here is the full thread of the tweet referenced in my original question. As pointed out in the comments to this question, the following tweet does add further context. I believe that the original question about the existence of technologies or attacks that would do such a thing remains vaild. 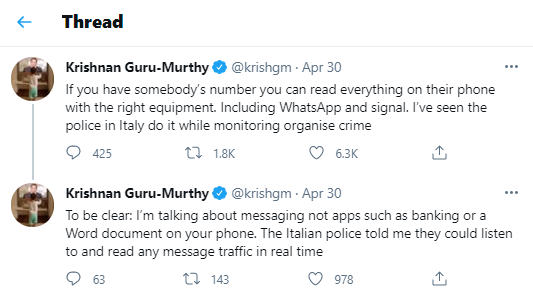 Such an assertion sounds conspirational and not founded in reality. However:

There are more theoretical approaches for exfiltrating data from a device, such as side-channel attacks that monitor electromagnetic radiation from the device. However, these generally require close physical proximity to the device to work in lab settings.

To be clear: I’m talking about messaging not apps such as banking or a Word document on your phone. The Italian police told me they could listen to and read any message traffic in real time

This indicates they are talking about interception of SMS, which is trivial, especially if the mobile network operator cooperates – which they might be legally required to do. SMS have next to no security guarantees like Confidentiality, Integrity, or Authenticity. This is in stark contrast to all mainstream messaging apps that do use transport encryption, or even end-to-end encryption. For example, it is exceedingly unlikely that Italian police have cracked Signal encryption. For messaging services with transit encryption but without E2EE, the messaging provider (such as Facebook or Telegram) does have the plaintext messages and could be compelled to hand them over to the police.

Attackers wishing to take over control of a phone would use an IMSI catcher. This operates as a fake mobile tower, so this is a MITM attack. Some countries do not have encrypted phone traffic, in others IMSI-catchers are used by law enforcement and intelligence agencies. It is possible to downgrade the GSM/LTE protocol so that mutual authentication between network and phone does not work.

When travelling through foreign airports, it is best not to switch on your phone until clear of the airport.