How does Chrome 78+ block all methods of DLL injection?

How does Chrome block all methods of code injection past version 78? It even blocks signed DLLs it doesn't have in a static list.

This is caused by a number of Windows exploit mitigation features, most notably Code Integrity Guard (CIG) and image load policies.

You can see this in effect using Process Hacker's mitigation policies view: 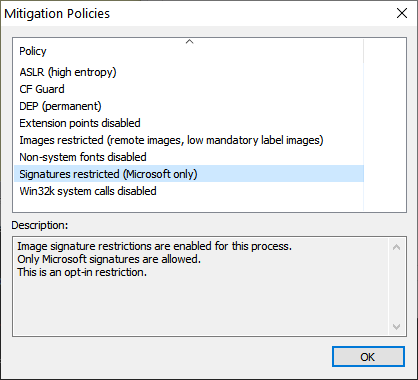 The "Images restricted" mitigation is preventing any images (executable modules, like DLLs) being loaded into the process if they are from remote sources (e.g. SMB shares) or if they are marked as low integrity.

It is also likely that Arbitrary Code Guard is enabled on a per-thread or per-process basis elsewhere within Chrome, which prevents RWX memory pages from being created by all but opt-out threads, and makes executable pages loaded from signed modules immutable.

Not the answer you're looking for? Browse other questions tagged chrome injection or ask your own question.

81
Worst case scenario, what can a Chrome extension do with "Your data on all websites" and "Your tabs and browsing activity"?
16
Detecting reflective DLL injection
15
Why would Chrome not display a padlock icon at all on an SSL site?
0
Disabling CBC ciphers does not stop Chrome from negotiating to use CBC ciphers
2
Script injection on all browsers
2
Why does Chromes XSS filter block injection into HTML element, but not into attribute?
4
Source code being injected into every website
1
How does malware avoid AV's when using a simple DLL injection technique?