How seriously should we take this commentary from John McAfee? If it's serious, what do we do? [closed]

Ask Question
Asked 2 months ago
Active 2 months ago
Viewed 809 times
1
Closed. This question is opinion-based. It is not currently accepting answers.

This question refers to this YouTube video of John McAfee

Because videos can disappear, I've provided a screenshot and transcript (transcribed by me, so please forgive errors)

What John is saying sounds pretty serious, but to what degree is it just scaremongering? How seriously should we take this commentary? Is it real?

If it is serious, it sounds like we are heading for a digital doomsday, where all out money suddenly ends up in China. What do we do about it? Factory reset all our devices and change all our passwords? 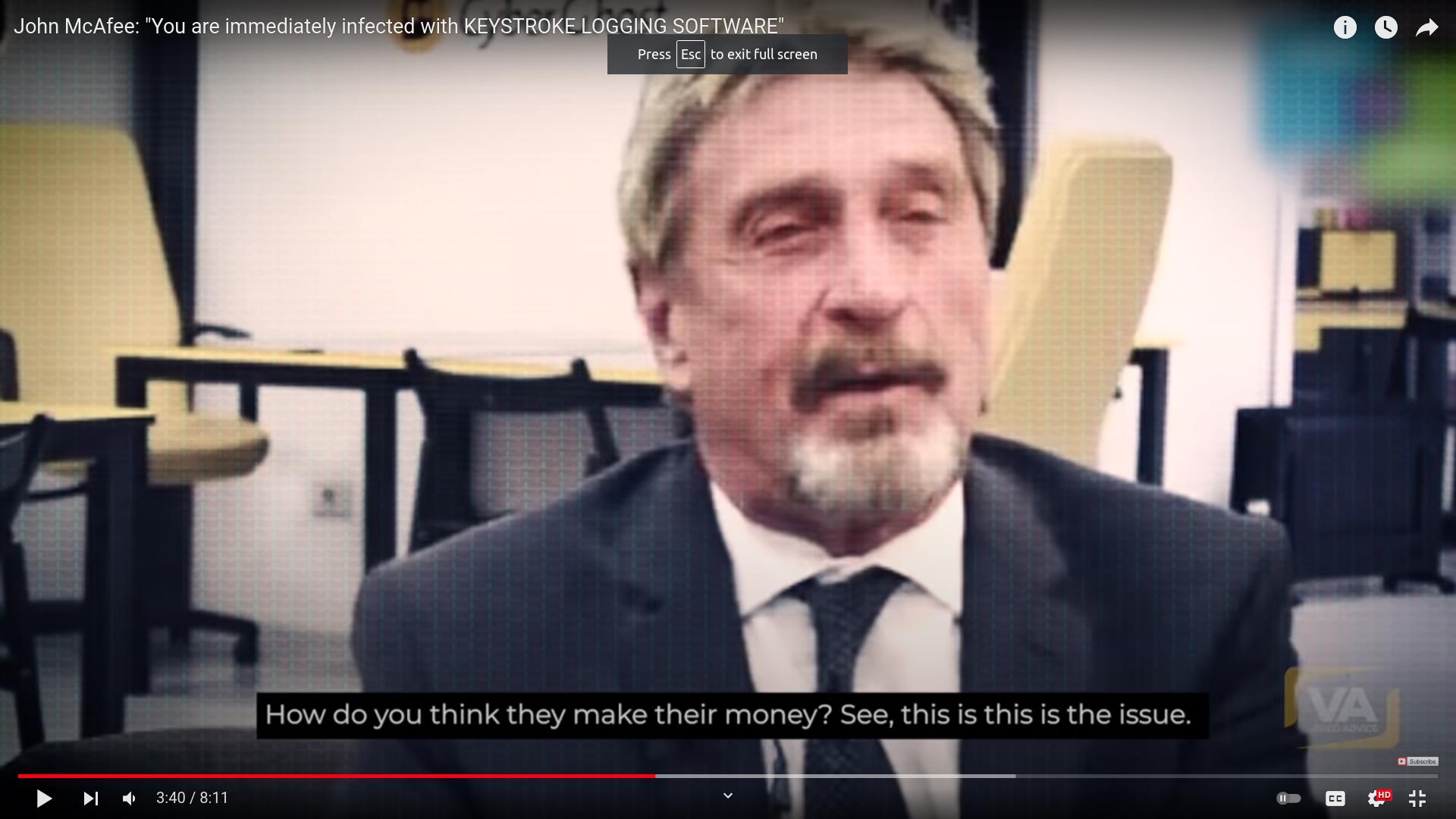 Over half of all smartphones, both iOS and Android are infected with keystroke logging software. This is a known fact.

People pay these pornography sites for the ability to put their key logging software on your phones. How do you think they make their money? It costs millions of dollars to maintain these massive databases and have the bandwidth to disperse this pornography, and yet you don't pay. Yes, you're paying.

And so you're looking at your phone and you have all of these facilities, but it is the world's greatest spy device; designed as a spy device.

Now, there's nothing wrong with that as long as the person spying on you is spying on you for benign reasons, meaning maybe they just want to sell you something. I can choose to say No.

But hackers use those same facilities. They are built into the operating system. So if a hacker gets access to those facilities, they may choose to empty my bank account without my permission or knowledge, or to steal my identity or to start charging things on my credit cards. Or if I have a Bitcoin wallet or an Ethereum wallet, they can empty my wallets.

This is the fact. This is not science fiction. This is not me being paranoid. The antivirus paradigm is no longer functional. It doesn't work. I said this ten years ago and I'm the person who invented it. So, people should listen. I mean, if I invented it and I .. I built the first antivirus company .. viruses are not the problem.

By the time hackers have planted malware in your system, it's way too late. The hackers spent weeks, months or sometimes years sniffing around in your system, taking what they want before they even plant malware.

But you can find the presence of a hacker in your system so easily. Every hacker has to go through certain steps in order to break into any system and do damage.

The first thing they have to do is get through the firewall and all firewalls have holes. It's impossible to build a firewall that can keep out all hackers. It just can't be done.

They have to get through the firewall and then they have to find out where they are. And so what's on this net? So they sniff every device on the network. You have people I mean, I've even heard people at Google say that if you have nothing to hide, you have nothing to fear. Well I've never heard anything crazier!

Over half of all smartphones, both iOS and Android are infected with keystroke logging software. This is a known fact.

Every pornography site in the world, if you, if ever, I'm sure nobody here has ever looked at pornography. But if you have, then you have keystroke logging software.

How do you think they make their money? See, this is, this is the issue. It costs millions of dollars to maintain these massive databases and have the bandwidth to disperse this pornography, and yet you don't pay. Yes, you're paying. The instance you visit the site.

If you have an Android, for example, the site runs a Javascript which set the download unauthorized application flag. The very first video you watch, you now, because that's a click through. You clicked! You did something, said Yes. Oh, good, yes, I'll do that.

Downloads first and foremost a remote rooting (routing?) function. If it's an iPhone, a remote jailbreaking program. All can be remotely rooted (routed?) now. After it's rooted (routed?), they download a key logger. And all this take just a matter of seconds. And from that point on, somebody is watching every single one of your keystrokes.

Now people pay these pornography sites for the ability to put their key logging software on your phones. Why?

Well maybe they are a Bitcoin afficionado and they're going to see, Ah! Do you have a Bitcoin wallet like Mycelium or what ahave you? Yes. Well, this is going to hang around until you access it and input your keys or your passwords. And the next day your wallet it going to be empty.

Or maybe you do online banking. All right. You have a password. You have an application. The very first time you've logged into your bank to check the balance, to do anything, they go, "Thank you very much," and the next day your bank balance will disappear.

Now, why has this not happened to you already? Because hackers are not stupid. In order to take something, they have to download additional software. If they only take four or five hundred people's bank accounts in one day, then the next day the white hat hackers are going to say, Ah! This is how they did it. Everybody, you can protect yourself.

No. They're going to wait until one day this year or next year and one hundred million people in one day are going to have your bank accounts eradicated. Zero balance. Or your identity will be stolen or your Bitcoin wallet will be emptied out. Or maybe they've been watching your keystrokes to see if, you know, maybe you're saying something to a friend or a lover that maybe could compromise you. Maybe they can blackmail you. If they get lucky, you might be a United States congressman or senator. In which case, now not only do they have money, they have power.

And the Russian cyber mafia and the Chinese cyber mafia are so pwerful, they pay literally hundreds of millions of dollars to these pornography sites to allow them to access your smartphone so that at some point they can utilize that.

Now, you said how secure are they? They're not! They're not. Neither the alt currency wallets nor anything else in the cloud. Because what is the cloud? We haven't thought this through, people. The cloud is a place where I'm going to store data. I don't know what computer it's on or even what country it's in. I don't know who is managing it and monitoring it and controlling it. I don't know what type of security facilities you have. I know nothing! And I'm willing to put my valuable data there. No! Why would we do that?

Now, if it's something I don't care about that if you steal it, I don't care if it's a list of books I read, you know, I'll just recreate it from the web. But if it's something that matters, it's like saying we've all agreed, now we have secrets. Yes? Why don't you let me keep your secrets? Why should you be burdened with having to keep your secrets? I mean, you've got too many stories to tell. Why don't you give it to me and let me manage it for you? Isn't that crazy? And yet that's what we're doing with our (quote) secret data we don't want to have stolen from us or taken or accessed.

I would not read it literally. I cannot imagine that over half of smartphones are equipped with keyloggers and that various hackers are actively watching that. Because in my opinion, black hats want to make the highest money with the least cost. And I think that phishing and ransomwares are the up to day balance. But I must acknowledge that it is no more than my opinion.

That being said there is much more here. Are our favourite apps spying us? Of course they do! For the app (you could read site or desktop application too) to be able to present targeted advertisements or behave the way we want it has to analyze how we behave and what we look at more. At is has to submit it to an AI that was trained with huge data. So it is likely that our own data has been used to feed that large database... Because even if some of us try to do their best to answer NO when asked to share something, who can be sure to have never inadvertently clicked YES? The rule has ever been if it is free you are the product. And most Facebook and Google goodies are free...

And what is said about cloud storage is not far from the common opinion on this site: the security of data on a site cannot be higher then the security of the site itself and its datacenter. Because site admins and datacenter admins do have hands on it. And who really knows where and how are stored the data they have put in the cloud?

Again no more than my opinion, but it looks like the Over half of all smartphones, both iOS and Android are infected with keystroke logging software sentence is aimed at capturing attention. With no further development I would not trust it more than that. Yet I would pay attention to all other warnings in that interview.

Not the answer you're looking for? Browse other questions tagged keyloggers smartphone cryptocurrency or ask your own question.

0
Is it possible to be infected without installing anything like said at the beginning of the video?

3
Why Google and smartphone manufacturers don't care about updates?
1
Online Shopping password keylogger risk
1
Money stolen via Android malware Port 4000 remote anything exploit
0
Are auto-type features of password managers actually effective against keyloggers?
1
Isn't Autohotkey effectively a keyspectator should I feel safe that I'm allowing this program to watch my keystrokes
3
Making transactions only, or almost only, by QR codes