How exactly is a fingerprint stored in Windows Hello? Why is it claimed to be more secure than a password?

I can't quite imagine a scenario where fingerprints can be stored in a way that defeats the weaknesses of password storage (i.e. pass the hash attacks or password reuse). Moreover, I couldn't quite find a concise explanation of the way Windows Hello stores and compares fingerprint hashes, so I'm wondering how exactly these measures were implemented that make them better than passwords.

What actually happens in a Windows Hello domain? Is there a fuzzy hash of a fingerprint being sent to the domain controller? If you get an image of someone's finger, does that mean the fuzzy hash is compromised forever? Is it possible to get your fingerprint stolen from Windows memory?

How does the fingerprint work?

In general they use pattern matching algorithms and hashes of various patterns in your finger. I wont pretend to know the exact mechanism, but I am fairly confident that your fingerprint cannot be extracted from stored data.

Why does Microsoft claim fingerprints are more secure than passwords?

This likely comes down to psychology rather than the actual mechanism behind verifying fingerprints. If either the fingerprint or the password verification would have any known major flaws, I would like to think that someone would've fixed them.

However there are multiple non-technical problems with passwords. The average person wants to log into their computer quickly, and thus chooses a short and memorable password (not secure). Passwords can be susceptible to shoulder surfing. And worst of all I personally know people who write their password on their computer using a sticky note. None of these can be done with a fingerprint.

That said, fingerprints are not without their flaws either. However most problems that arise with them wont affect the average person. For example with expensive equipment fingerprints can be extracted from objects you touch. Furthermore, (a fact that hopefully doesn't concern many people) fingerprints have different protections by law, in the United States law enforcement cannot force you to give up any passwords, which is not the same for fingerprints.

The gist of it is that (from my understanding) you are told that fingerprints are more secure, as they are for most users. As for the few for whom its not enough, they should probably use both.

Fingerprint is not that different from password, it is just an other way of "inputting" some information that can authenticate someone. 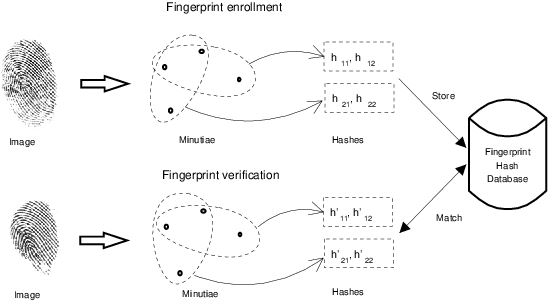 The software looks for the locations of multiple identifiable points (Minutiae extraction) on the fingerprint "map" and stores the hashes of these location vectors. So actually a set of hashes are being compared (looking for a partial match) to an other set during authentication. Everything else - i.e.: encrypted channel for the not yet hashed values, hash algo, etc. - is the same as for password authentication, except that it's a bit harder to change your fingerprint.

An other thing is how hard is it to "input" a stolen fingerprint into the sensor. Optical sensors can be easily compromies with a printed image of the fingerprint. With CMOS sensors it's harder.

It's more useful as a second factor for authentication.

Not the answer you're looking for? Browse other questions tagged windows windows-hello or ask your own question.

10
How secure is Windows Hello when used with Intel 3D facial recognition?
9
Can an intruder still possibly succeed with pass-the-hash or pass-the-ticket on Windows 10 / Server 2016 networks where Credential Guard is enabled?
2
WDigest password stored in cleartext - Windows
2
How long are password hashes stored locally?
4
How does Windows Hello recognize me with a mask on?
1
Is Windows 10 Home more secure than Windows 10 Pro in some way?
1
How exactly does Windows Bitlocker work?