The Power2Go webpage says that the software is useful for "movie disc authoring" and for burning data discs. The page refers to encryption only in connection with data discs, not movie discs.

I am interested in burning data files to Blu-ray disc. My question is whether I would achieve comparable practical security by encrypting data files via Power2Go instead of encrypting them before burning, using something like 7-Zip or WinRAR.

The latter have some advantages. They seem more dedicated to security. In the case of 7-Zip, I could include a working portable copy on the disc, as a precaution against the day when relevant software is no longer available. I haven't used Power2Go, but I assume 7-Zip and WinRAR would offer more compression options. The files would be encrypted even when they weren't on the Blu-ray disc. I wouldn't have to bring the unfamiliar Power2Go software into the mix. I'm not sure whether I could retrieve the files from the disc if, say, Power2Go failed to work on some hardware, or in some future version of Windows.

My primary concern is whether encryption in disc-burning software can be legitimate. The Power2Go webpage seems to say that data on a BD-R can be protected, when movies on a BD-R are vulnerable to ripping. I don't believe the disc-burning software I've used offers encryption - which leads me to wonder whether this is something of a gimmick. Certainly it could be convenient to use a one-step Power2Go solution when burning a stack of BD-Rs, so as to eliminate a separate (7-Zip or WinRAR) encryption phase.

BD-Rs do not natively support strong password-based encryption. They are merely a medium that data can be stored on. DRM in video is the closest you'd get to encryption, and it is designed simply to make it more difficult to play licensed videos on a device that doesn't support DRM.

Treat recordable optical discs the same way you would treat a flash drive. If you want the data on it to only be recoverable by someone with a password, you need to encrypt it first. I would very strongly recommend you avoid "Power2Go". Even if they do use strong algorithms, it's unlikely that they've implemented everything correctly. It would be much better to use a dedicated encryption utility like VeraCrypt, or a utility with a known-good encryption, such as 7zip.

There's a lot more to encryption than picking a strong cipher alone. You need to use a good mode of operation. You need to use key stretching, ideally with a memory-hard algorithm. You should use authentication if possible. Because Power2Go doesn't report what it uses besides the fact that it uses AES-256, you should assume that the authors don't know how to implement strong cryptography.

Here is an example of a digital image encrypted with "military-grade AES-256": 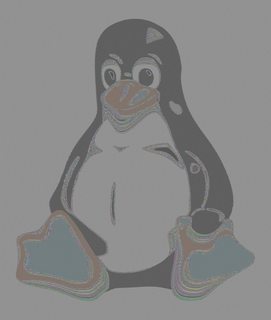 Can you tell what that's an image of? Yes, it's a cartoon penguin, and yes, it is encrypted, but it is encrypted using a mode of operation called ECB, which is not safe for this purpose. This is a famous way of illustrating that much more goes into designing secure encryption than the algorithm choice.

Not the answer you're looking for? Browse other questions tagged encryption aes disk-encryption file-encryption 7zip or ask your own question.

3
What constitutes "military grade encryption" in 2021?

0
Are files hosted on cloud servers/websites/databases manually checked by people?
0
Undelete-secure AES software and software for carrying out "full undeletion" free-partition-space zeroing/reformatting on Windows?
10
AES encryption on embedded device: Can this be secure?
0
Would AES encryption of a small number of blocks be less secure than encrypting a large, fixed-size padded buffer?
1
Secure Software Architecture
0
AES-256-CBC encryption IV vs salt when encrypting files with a secret key
2
Secure file storage in cloud as backup
2
Disk encryption clarifications
3
What constitutes "military grade encryption" in 2021?