Can I prove that I did not receive an email?

A company are saying they sent an email to me. I have gone through all of my inbox, junk, and deleted files and the email still doesn’t exist. They have asked me to prove the email never got to me by asking my email provider to send over log details but I have looked into this and it is impossible.

Is there any other way to prove an email wasn’t sent to me? Also I have asked them to resend the email but they are saying because the email was automatically generated from an email sent to them they don’t have a copy of the sent email.

This is one of those situations where Amazon is asking someone to send a picture proving that a package was never delivered. You can't.

In general, you cannot "prove a negative".

Trying to get your email provider to supply logs will be difficult and might take a long time. And they might not do it. What will be a lot easier and faster is for the company to check their own email logs for proof that they sent the email. They don't need a copy, just a log entry.

The answer above by @schroeder is spot-on (+1). It is impossible for you as the recipient to prove that you didn't receive an email. However, the sender does have the ability to prove that they sent an email, and that the mail server that handles incoming mail for your domain received it, and that this mail server acknowledged receipt.

The diagram below shows the journey that an email message makes from the sender to the recipient: 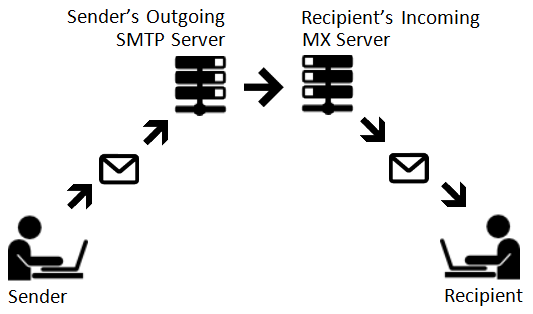 As you can see, this all hinges on the sender being able to access their outgoing SMTP server logs. If the sender outsources their outgoing email to a third party provider, it might be difficult to get the provider to pull these log records, as this is typically beyond the level of service that most mail providers offer (at least at the individual/SOHO/SMB level). However, an outgoing SMTP service such as UltraSMTP, makes these log records available to end users through a self-serve web interface, so that end users can get the information they need themselves to track down problems with non-received messages. [FD, I am the developer.] 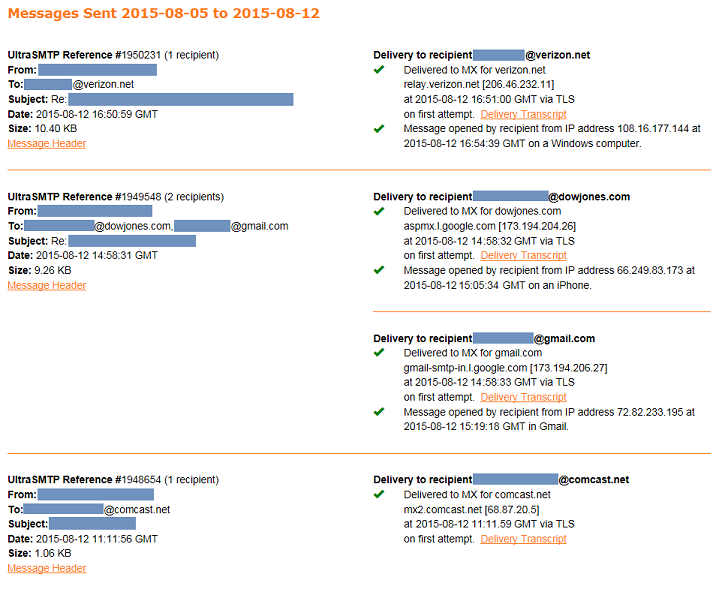 With @mti2935 already having explained the technical details:

"prove" to which standard? To a forensics level as if it were criminal evidence? Nope, you can't. The old problem of proving a negative. Prove to me that there's not a picture of my cat orbiting Saturn.

But "prove" to the level required to convince some call center agent? Sure. Ask for the exact time they sent the message (if they know they sent it, certainly they can say when, right?) then check your log files around that time. No message received from their address around that time? There's your proof. Snip the log excerpt, black out any info you don't want to share, send it to them and say "you claim you send the mail at XYZ date/time, but as you can see my mail server did not receive a mail from you at or around that time. You may have sent it somewhere else or had some other kind of communication failure."

TBH, I'm quite sure there's a process to re-send the mail manually. It's just that whoever you're talking to is either too lazy or doesn't know about it.

It is unreasonable to provide logs, unless this is a pre-agreed service. Redacting details for every non-matching entry could be automated but not unless there was a serious business case.

However, depending upon where you work, the email may never truly be deleted, nor silently filtered (is your firm SOX Act compliant?). If it was important to them they should have a receipt or your return (manual) ack response.

They should have a copy with timestamps. But some large blue chips stage their email according to priority and their DEP policies.

Do you use a gmail/hotmail/protonmail address? They may have confused them.

Automatically generated huh? They are not in a good position. Not keeping a copy is effectively the destruction of that information.

Not the answer you're looking for? Browse other questions tagged email or ask your own question.

0
email on hosting company's site hacked?
0
Metadata-free Email: How can SENDER directly, anonymously, and securely ask RECIPIENT’s mail provider to deliver a metadata-free email?
3
Is BSI’s process good? (Informing email address owners that their address/password (of unknown/different accounts) was stolen)
8
How to prove someone sent an email to you?
2
Can emails not actually sent by me appear in my "sent" folder?
1
Can someone redirect or block emails of a specific sender?
0
Can an HTML attachment in an email contain a virus?