What is this potential identity leak that NoScript warns about?

Recently, while using the Tor Browser, NoScript popped up the following warning when I opened a stack overflow link in a new tab from duckduckgo: 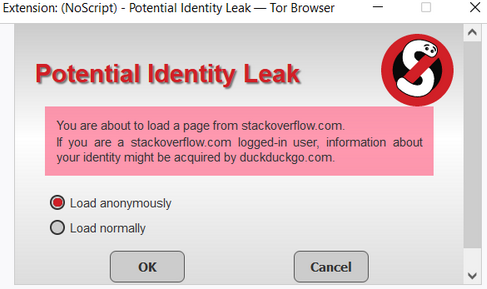 Now, as far as I know, when I click on a Stack Overflow link, Stack Overflow won't normally send any information back to duckduckgo. So how is this identity leak/de-anonymization attack supposed to work?

So after some digging into NoScript's settings, I found some settings for something called "Cross-tab identity leak protection". Googling this led to a tor project issue Targeted Deanonymization via the Cache Side Channel. This seems to be a recently-added feature of NoScript intended to protect against a new de-anonymization attack. However, the attack seems to be of concern only for a somewhat niche threat model.

The attack relies on a cache-timing side channel, and the ability to share a resource with only a specific user on websites like Twitter, Google etc. to uniquely identify a target. From the website of said attack:

The attack builds on a leaky resource attack by using CPU cache side channels instead of cross-site leaks. In this way, the range of attack scenarios (i.e., affected browsers and resource-sharing services) is considerably larger.

In the execution phase, the attacker causes the target to visit the attack page (steps 1 and 2). As the target’s browser renders the page, it makes a cross-site request for the embedded resource to the sharing service (steps 3 and 4), passing the user’s authentication cookies. The response of the sharing website to this request depends on the target’s identity. With the sharing-based approach, the response to this cross-site request contains the shared resource if the user is the target, and an error otherwise (step 5). With the blocking-based approach, the opposite happens – the response contains an error for the blocked target, and the shared resource for other users.

3
What information will dig leak to an attacker?
8
Does Windows 10 leak information about your IP address?
13
How did my phone provider leak my MSISDN to an advertising website?
4
Accessing over a VPN both sites that know your real identity and sites you want to stay private from
21
Does Mozilla's new "Facebook Container" have any advantages over uBlock Origin?
0
What is ScriptSafe's "Client Rectangles" and what information does it leak?
0
What can people do about Tor's weaknesses?
0
Is this potential XSS exploitable?