Can an employer access Whatsapp messages if you are using their servers?

Does anyone know if an employer can access whatsapp messages if you are using their servers? Whatsapp apparently say the messages are encrypted, but I'm not sure about this.

The following research paper describes four attacks on WhatsApp. I don't know whether they have been fixed.

This may be relevant to you.

SMS spam attack. A second attack allows an attacker to send arbitrary text messages to anyone around the world, for free, from the WhatsApp servers. See Section 5.4 of the paper.

Phone number enumeration attack. A third attack allows an attacker to enumerate the phone numbers of other WhatsApp users and identify the operating system they are using. See Section 5.5 of the paper.

Status message forgery attack. A fourth attack allows an attacker to change any other WhatsApp user's status message to anything of the attacker's choice. See Section 5.6 of the paper.

Implications. None of these directly address the particular question you asked. However, these vulnerabilities diminish my confidence in the security of WhatsApp.

The vulnerabilities described in the paper are extremely basic and elementary flaws. We're talking facepalm territory. The flaws include, for instance, a complete lack of access control or authentication; as well as inappropriate trust in the client. (Basically, OWASP A3, A8, and A9 violations.) Of course, anyone can make mistakes, but these are such basic mistakes that they make me wonder what other mistakes the WhatsApp developers may have made, and what is wrong with WhatsApp's security review process that these slipped through into deployment.

So, based upon this analysis, I would be reluctant to rely too heavily upon the security of WhatsApp.

WhatsApp is a fairly popular messaging system according to the media:

WhatsApp handles ten billion messages per day as of August 2012

Financial Times: WhatsApp "has done to SMS on mobile phones what Skype did to international calling on landlines.

It supports encryption and although having a number of security incidents, I would expect the security to be high and incidents similar to those above to be transient and managed by the company.

In conclusion, I think Whatsapp's message privacy is trustworthy. You should worry more about the security of your phone. Android smartphone are particularly not kept up-to-date with patches.

This article regards Whatsapp's encryption to be too weak and the company's handling of security issues to be lacking:

Do the following test on your mobile device and at least you can be sure that your device can't be monitored like that. 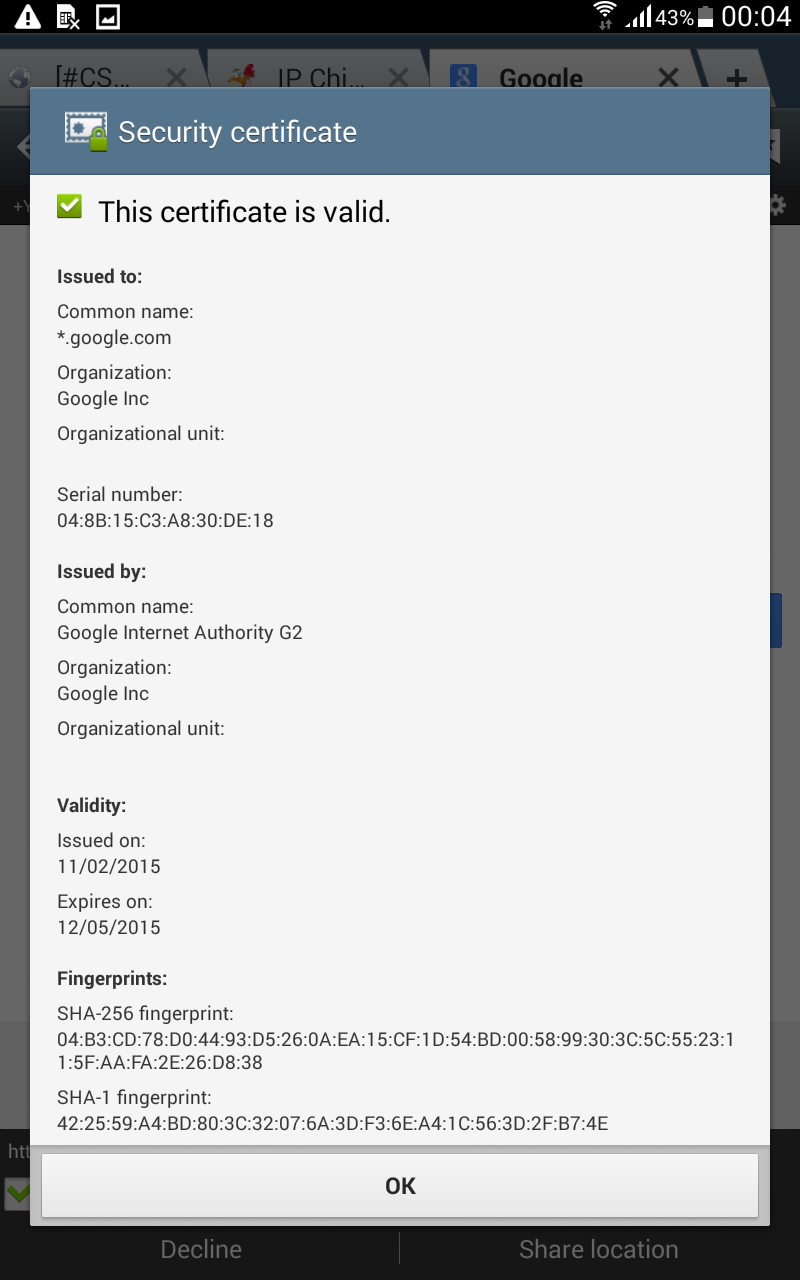 If issued to is Google Internet Authority G2 then https is not penetrated or MITMA(Man In The Middle Attack) employed. If there is another name like your company name, then it's possible they can penetrate the https traffic.

Not the answer you're looking for? Browse other questions tagged privacy physical or ask your own question.

66
Can web sites detect whether you are using private browsing mode?
8
With Google's new Privacy Policies going into effect soon, how can I better protect myself using their services?
39
Client-side encryption, but cloud service can still decrypt data in the event of a death? Is this possible?
0
Sending messages using OTR & and GPG — is it detectable?
30
Privacy: can my employer access sensitive information if they pay my mobile subscription? I bought the hardware myself
2
If Whatsapp media messages are e2e encrypted, what is the point of storing popular messages on the server?