What should a security audit report include?

I'm in charge of auditing a medium-scale web application. I have audited web applications several times before, but I've always written a short PDF quickly explaining what I encountered and usually I'm the one who's gonna be fixing those vulnerabilities so I never cared for the actual content of the report.

In my current job things are done in a more organized fashion. First I have to write the report, then the project manager will review it, then he'll decide whether I'll be the one to fix the issues or someone else.

What should such report contain? I'm looking for a general outline of how it should be organized.

Update: Because I couldn't find anything here on Security.SE about audit reports, I decided to make this question a bit broader and include any kind of security audit rather than just web applications. I think it'll be useful to more people in this case.

There's a couple of ways that I've seen this done, each has it's pros and cons.

As noted by @RoryAlsop below a common point for both approaches is that the executive summary should, as much as possible, be written for a business audience (assuming that it's a test you're doing for a 3rd party or the report will be passed to management).

In terms of format for the findings, I usually include the following

One other point to make is that if your do a lot of tests it's well worth having a database of previous findings to avoid having to look up references repeatedly and to make sure that severities are consistent.

Exciting question! Too often I feel that our industry strives for the latest and greatest fad in security. We go after the latest exploits, spend serious cash on the latest tools and blame layer 8 for the gaps. I know that is a gross generalization, but I wanted to underscore the importance of this topic -- Reporting!

I have my opinions as to what should be included in a Vulnerability report. From a structure perspective a thorough report will have the following:

Some of the folks over working on the PTES are laying down some good foundations. While the focus there is penetration testing, I would think that many of the methodologies, especially reporting, could be transposed for an audit. You can check them out at http://www.pentest-standard.org/index.php/Reporting.

After a Penetration Test or Hybrid Application Analysis the resulting report is centered around the findings. There should be a high level overview that discusses the flaws and their collective impact on the system.

A finding is any security violation. This includes any CWE violation, but the most common web application findings fall under the OWASP top 10. Each finding should have steps to reproduce the problem, a severity, the impact of this flaw, recommendations for fixing the issue and links with more information. For example if you find an XSS vulnerability, show a screen cap of an alert box and the URL you used to trigger the issue and link to the OWASP page on XSS. If you can access the cookie with XSS, then the issue can be used to hijack a session, otherwise it could be used to undermine CSRF protection.

What if you can't find anything? Keep looking! The CWE system is massive, and even the most seasoned develops will make mistakes. There are vulnerabilities that affect literately every application I have touched. Clickjacking, lack of brute force protection, and Information disclosure is probably the most common. For example username/email address disclosure via the forgotten password or signup feature. Displaying version numbers (http headers or anywhere else). Verbose error messages, local paths, internal ip addresses.... anything that might be useful to an attacker.

I think what Rook says it very true, though this is more about the core of report, rather than its structure, to be placed after the report format has been designed.

Try the STAR model (Situation, Task, Action & Result): I have seen great reports written with this model under the hood. The great thing about it is that it can be used in almost all contexts: you would just need to adjust to what is relevant to you. In this case, you could structure your report around this model and use what Rook described to fill in the structure.

Also, even if you have no actual findings, you could still write a full report based on the STAR model and still deliver something that is professional and coherent.

I've never written a security audit report, though in my role I tend to receive them. The best one that we had looked over our whole product at specific areas in interest. The report was broken down into those areas. Overall the format was:

Section 5 was broken down for each target as:

In first: It's like writting a book, first line will keep reader or not. (The Intro is to write at least.)

Some trick having to keep in mind:

So for staying light for the administrative people, Introduction and Conclusion have to be explained in simple manner, maybe using pictural language, and

for staying light for technical people who have to work around your text, be exact and detailed. Maybe a simple console dump with some comments could be enough.

This may sound like a cop-out but it isn't, and that is to simply ask what format they like. I've performed all sorts of reviews and most companies have a format of what information they like and how they like it. Ask to see previous reports as a template, it will save you loads of time.

How do I recon this situation & what exactly am I addressing?

I construct & architect security operations for a living. I had been addressing Application Security Reports for a decade now & quite sure about what's to be included & where to have them included. Presentation will Matter.

I've given this a fair amount of thought. Looking at all the answers, I feel that the missing parts alongside with the most definitive answer & the knowledge should be focused.

To start off, I would like to go by saying - Please do not confuse between an Assessment & an Audit. Audit has Audit Trails, an Assessment has nitty gritty Technical Details. The Original Post says an Audit was done to the applications which it couldn't be. More technically it were Assessments.

I have picked up several including the Methodology Followed at CERN, ref: http://pwntoken.github.io/enterprise-web-application-security-program/. To my astonishment, most often - the technical details which is as a Security Assessment is Likely to be more helpful to the Developer & It Operations rather than the Business Stakeholders. When you try to Audit an Application or set of Application on a Public Interface, you bring it to the application stakeholder.

Coming to the points of my sample Application Report, here is how it looks (I apologize for the scribbles as it were absolutely necessary but had to be taken off as per NDA norms): 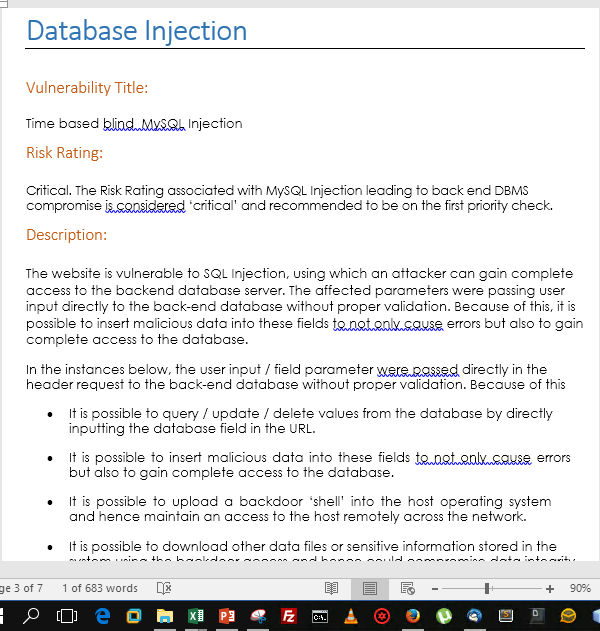 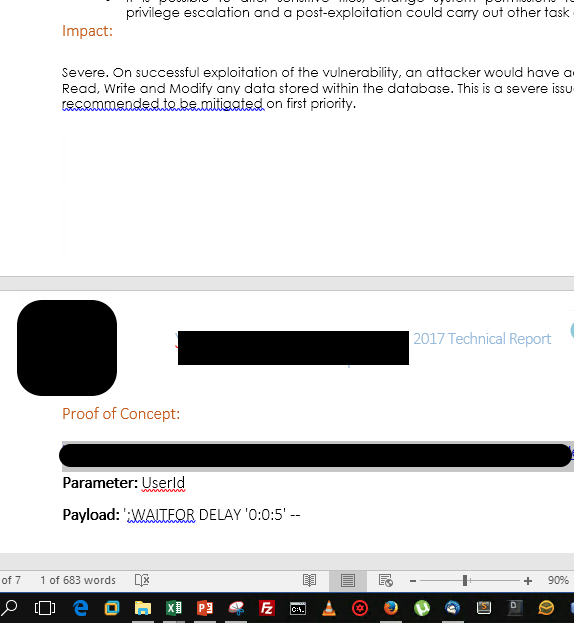 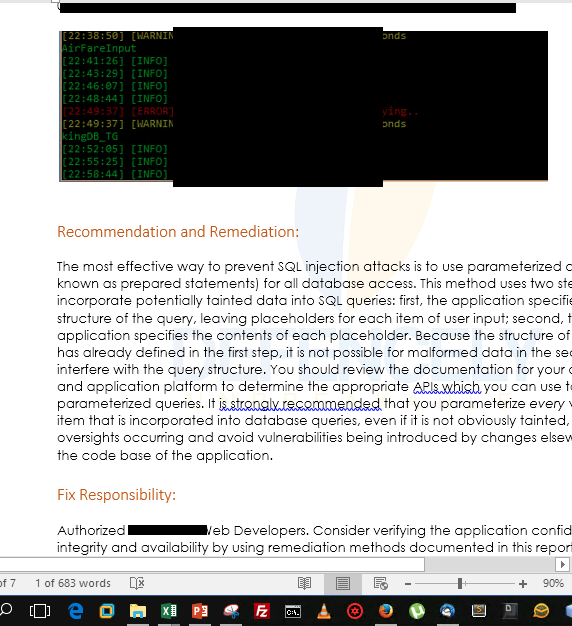 Let's explain what are these components in key pointers:

Hope this will help.

If the goal of a security audit report is to persuade management to remediate security weaknesses found, then you want to describe the impact of not fixing the issues. As an IT auditor, I frequently meet resistance from non - technical management members about recommendations I make such as:

You want to describe in you report what the impact of not remediating security vulnerabilities would be in business terms such as:

In summary, your goal is to obtain business buy-in so that security is transformed from solely an IT function to a function having negative economic and non - economic (ex: damaged reputation) ramifications if vulnerablities are not heeded to.

Not the answer you're looking for? Browse other questions tagged penetration-test audit static-analysis or ask your own question.

14
PostgreSQL Security Audit
13
Should a pentest report include the tester's opinion?
7
Security Researchers: How do you choose what services or software you are going to audit next?
1
Precauations for web application security audit
2
Information Security Audit - Employment Contract
3
Security Configuration Audit - CIS benchmarks
1
Open Source Security Audit
0
Is it ok and useful to keep a security audit report after completing an audit?
0
Difference between Web App Pentesting and Web App Security Audit