What is the difference between Exploit and Payload?

In computer security, we know that weak points in software are called vulnerabilities (if related to security). And once the vulnerability is found, theoretically it requires a piece of code as proof of concept (this is called an exploit). In this context, the term payload is also mentioned.

Then, what is the difference between 'payload' and 'exploit'?

The exploit is what delivers the payload. Take a missile as an analogy. You have the rocket and fuel and everything else in the rocket, and then you have the warhead that does the actual damage. Without the warhead, the missile doesn't do very much when it hits. Additionally, a warhead isn't much use if it goes off in your bunker without a rocket delivering it.

The delivery system(missile) is the exploit and the payload (warhead) is the code that actually does something.

Exploits give you the ability to 'pop a shell/run your payload code'.

Payloads are only referred to when code execution is possible and not when using things like denial of service exploits. 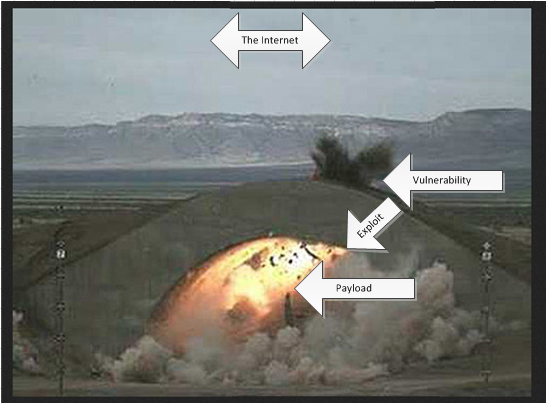 You already know what a vulnerability is.

Have a look at the Metasploit Framework. It is simply a collection of exploits and payloads. Each exploit can be attached with various payloads like reverse or bind shells, the meterpreter shell etc.

The beauty of the Metasploit Framework is that it is modular. You can mix and match different payloads and exploits to achieve the needed results.

I prepared an easier to read version of the diagram (I believe). It's following same basic principles the @D3C4FF's excellent answer does. I was tempted to go with his analogy first, but I thought it wouldn't be appropriate due to recent events and for the current global political climate.

The target (self-portrait of a crested black macaque) is just cute, and the banana just what I thought a convenient analogy for the occasion. Neither are meant to be offensive. 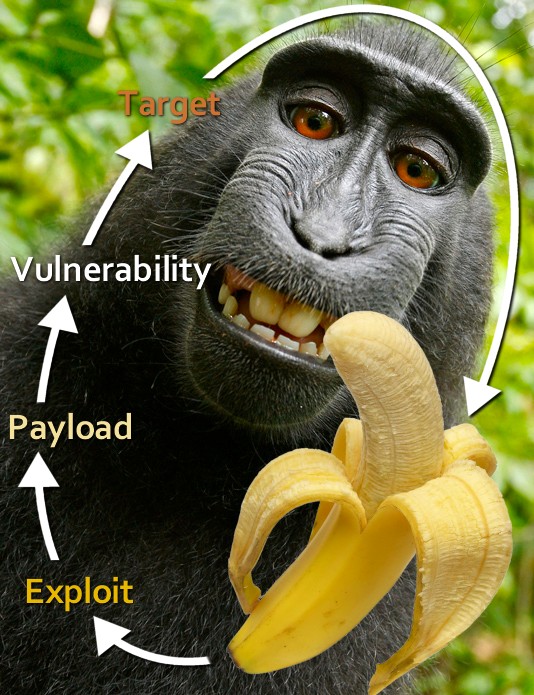 While this example diagram might seem a bit odd, I actually believe it's suitable beyond just being controversial (as current votes on this post show). Bananas, among other obvious uses, have actually been suggested as a delivery mechanism for medicine before, where normal vaccinations wouldn't be as effective.

The banana peel also denotes an exploit perfectly, since it's later discarded just as the exploit would be, while the payload is consumed and digested by the target through a vulnerability (or in our case, the cute macaque's mouth).

Not the answer you're looking for? Browse other questions tagged appsec exploit terminology or ask your own question.

6
Where can I find exploit code?
0
Collecting Information from CVE and MSB to write proof-of-concept
14
What does the NSA's Recently Leaked “The Equation Group” Files do?
2
What are some examples of managed language exploits and where can I learn more?
5
What is the difference between a payload and shellcode?
1
Which exploit and which payload use?
0
Difference between Run and Exploit