Does hash solve passwords in parts?

From an answer this earlier question: Does adding dictionary words to passwords weaken them?

"...you have no way to recognize it as a password before testing it (against a hash or an online service)"

This raises my question, for clarification: Can dictionary attacks and related tools get feedback about words or patterns, in order to solve in parts? If a cracking tool extracts the user's name elsewhere (say "Kim" for example) and tries it in a 20-character phrase, doesn't it still have to solve the exact 20-char phrase before gaining confirmation of the 3-char sequence and location? Do the hash analyses find patterns to explore?

Proper cryptographic hash functions are all-or-nothing: you either get the exact correct input, to the last bit, or you get nothing. No patterns, no partial solving, no Mastermind-like cracking. That's why it is called brute force: there is no finesse whatsoever in password cracking.

Being able to solve passwords "partially" only happens in Hollywood movies, or in cases of blatant incompetence. 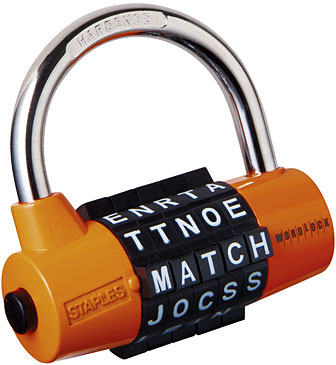 With combination locks, assuming they don't suffer a major design flaw and the attacker doesn't posses x-ray vision, is impossible to determine if the tried combination is a partial match to the preset unlock combination. The other lock rings that aren't in their unlocked position will prevent you to unlock all of it, but you have no way of determining which lock ring is in which position either. Pretty neat IMHO.

Ideal cryptographic hash functions (the ones that don't suffer from hash collisions, i.e. are collision resistant) work in the same way. Change one password character, and there's no way of determining a mathematical equation that will also take a previous hash value as input, and compute the next one. That's why cryptographic hash functions are also considered one-way functions. We know how to compute hash values given some value as an input, but we have no way of reversing these functions to work the other way, too. At least not for the time being.

Food for thought: We can't really prove some function is one-way, we can only prove that it isn't.

47
Is there any advantage to splitting a password?
11
Does adding dictionary words to passwords weaken them?