Is OpenGL a security problem?

Today, almost all desktop and most mobile operating systems and devices support some version of OpenGL. I'm wondering about the security implications of that:

So who or what keeps me from writing a shader program that reads data in the video or even main memory that doesn't belong to me?

I've found a presentation on the current state of affairs in the Linux graphics system which mentions that either the commands to the GPU are verified by the kernel, or that virtual memory is used on the GPU to separate users.

Is that also true for other, especially mobile, operating systems like Android, where the individual applications are strongly sandboxed, but have almost unlimited OpenGL access? Tegra 2 is even specifically mentioned in that presentation for allowing potentially unlimited memory access to users of the driver.

For proper security, graphic cards must be treated like all other sorts of hardware which have access to RAM: they must come under the umbrella of the MMU and the kernel-controlled scheduler, so that simultaneously executing tasks cannot impact each other, and may interact only through communication channels carefully managed by the kernel.

As you note, such isolation and sharing for 3D graphic controllers is only a recent feature. For most of the two previous decades, accelerated 3D graphics have been an open road to vulnerabilities... which turned out to be only very rarely exploited, for the following reasons:

Sandboxing platforms like smartphones may change that, because they do host applications which can access the 3D hardware and yet be hostile to each other. But why would they care ? It is so much simpler to ask for extensive access rights upon installation (the user just says yes to all anyway).

I've performed a few experiments on Linux and various GPUs and drivers. I took a basic OpenGL tutorial for texture mapping and replaced the pointer to the texture data in the call to glTexImage2D with a null pointer.

With the nouveau driver on an Nvidia GPU, the results were pretty interesting: 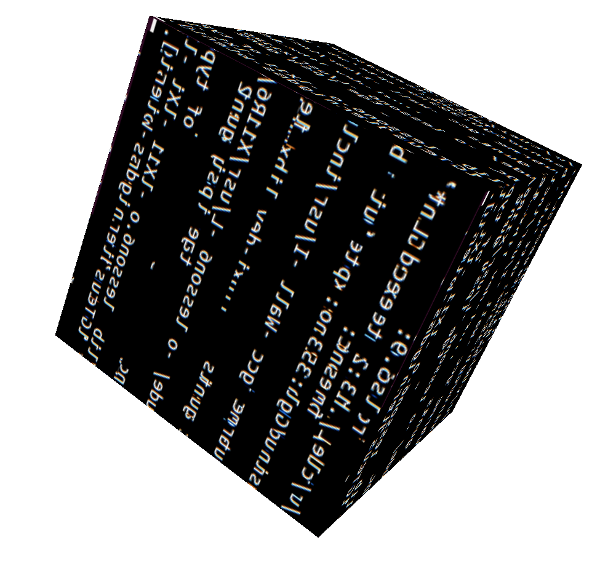 The text on the cube seems to contain the previous contents of my terminal window, which is composited on the GPU by Compiz.

The Intel GMA driver showed only a black cube; it was the same on Android (tested with an Adreno and an Nvidia Tegra 3 GPU).

Of course that doesn't prove that either of those drivers/systems are safe; the OpenGL implementations might just as well initialize the memory only in the userspace component of the driver instead of in the kernel.

Not the answer you're looking for? Browse other questions tagged hardware opengl driver gpu or ask your own question.

6
Are the Trends of Type II Hypervisors and Newer Applications a Security Issue?

3
Trial version security
6
Are the Trends of Type II Hypervisors and Newer Applications a Security Issue?
13
USB to Firewire converter is a security issue?
1
Security implication of non-free drivers
15
Mitigating forensic memory acquisition when an attacker has physical access to a workstation
5
Could the unused Mali GPU in the Libre Tea Computer Card be a security risk?
6
GPU passthrough security
29
DMA attacks despite IOMMU isolation
5
Modern Linux GPU driver security