Does providing OAuth for mobile apps pose a security threat?

Let's take a look at the basic OAuth workflow:

The basic idea is that the Consumer (App) asks the user to grant him access to the Service Provider. The service protects the user by asking him each time the app wants a new access key.

The real problem here is that the service doesn't know much about the consumer. In the case when a mobile app is a consumer, it doesn't even know its URL.

So when the grant access page appears, the service doesn't know who really wants access. So the user gets confused.

What is the solution to this problem?

In the case of a web app, preshared private keys could be used. But it isn't an option for a mobile app (since it is impossible to hide the private key).

Is it really a security threat? I suppose, the user should know from the context which app has requested access. But why then so many websites require a "secret" key? (which isn't really a secret when a mobile app is involved) 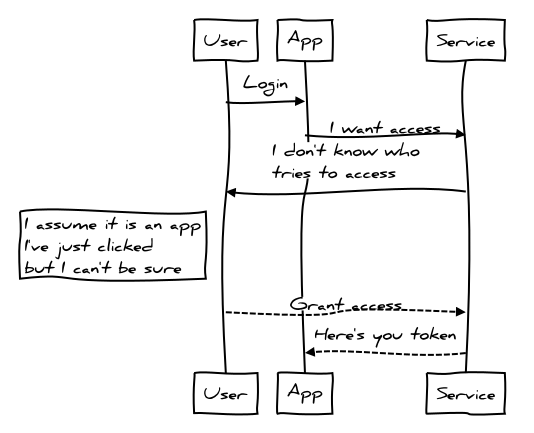 As you can see, it's the user who should make sure the proper app gets access.

But the message "I don't know who tries to access the service", while being precise, is very confusing.

Is there a technique to identify the app reliably?

So I think that the problem you're describing is, to an extent, solved by adding Client IDs to the authentication request. The application provides an ID to the service provider, and the provider then bounds the token provided to only be valid for that application.

However that doesn't solve the problem of a malicious application which could provide a deliberately forged client ID (if those are used).

I was watching a video from Eran Hammer (warning NSFW language), where he mentions that where service providers were forcing mobile clients to do web views for user sign-in (to prevent the mobile app from directly accessing the users credentials) and that the mobile app was then overlaying this and grabbing the users credentials, so that they didn't have to bother the user for them in future.

Ultimately I don't think that it's possible to completely protect users from an application once they've decided to trust it by installing it.

Not the answer you're looking for? Browse other questions tagged authentication authorization oauth or ask your own question.

9
password grant without client secret?
9
How should resource providers validate OAuth2 tokens?
1
what does `client_id` mean in password credentials grant of OAuth 2.0?
5
Why does oAuth and oAuth 2 have access tokens at all?
2
OAuth2 for mobile apps with confidential backend client (Is PKCE required?)
1
OAuth 2 Implicit grant type for first party SPA - Most secure and sensible way
0
Mobile apps that use OAuth2 to offload authentication to a 3rd party: are they misusing OAuth2?
1
how does spotify do oauth(+open id connect) from the desktop app?