People Generally spoof their IP address by using any other device's ip address such as printer, scanner. My question is in this kind of particular attack why we are using these devices rather than traditional ones such as desktop computers, laptops.

I predicted that It is because generally scanners, printers and all these kind of devices remain silent then those ones. Just make me correct is my predication is correct ?

And is there anyway that we can build our custom silent device somewhere else on other network and then we spoof our IP address by using side channel attack to determine whether the port is opened at our desired server or not !?

And also want to know that how to predict IPID in side channel attack when we are receiving RST from zombie( the device who's IP we are going to spoof). General packet will be in form of like this

It is impossible for an attacker to spoof their IP address over the open internet due to the three way handshake: 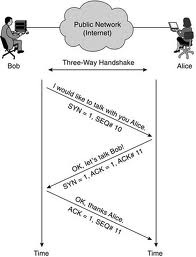 I don't believe there is any side channel attack involving ip address spoofing... These two attack patterns are fundamentally disjoint because the network is one channel, so what is the "side channel" in a spoofing attack?

In terms of local network attacks, there is the pwnplug. It is also possible to hack printers and other network hardware using CSRF and this could provide a beachhead into a network.

Not the answer you're looking for? Browse other questions tagged ip-spoofing or ask your own question.

1
What is the best tool to anonymize your scans (network/ports)?

1
IP attack by reading/writing data?
13
Apache/Linux server, DoS attack from own IP
7
Why can't we block DNS Amplification attack by blocking UDP packets or DNS response packet?
1
Virtualisation: security on the host side
4
Explain the last part of how Mitnick hacked Tsutomu Shimomura with an IP sequence attack
4
How to defend against a Spoofed-IP Blocklist DOS attack?
3
What prevents this specific type of attack from being viable?