How does LastPass' grid multi-factor authentication work behind the scenes?

I understand how to use the Grid multi-factor authentication as a user but how does it work technically? Specifically how can just a few letters from the grid be enough to decrypt any secret defined ahead of time or is this a more traditional challenge-response type of model?

I don't know exactly what you mean by "decrypt any secret defined ahead of time" but it seems that it is a second challenge response system, and the 2nd factor (something you have) is your printed grid. Technically it works exactly as other similar systems work. On their part of the system, your grid is stored somewhere and is associated with your user identity. When logging in, the system chooses 4 random characters of the grid, you look them up and provide them. If there's a match there and a match on the password part, you are get logged in.

On further implementation details, the grid is nothing more that a 260 character string which is stored along your other details and 4 different characters are chosen each time to be asked.

Wow. Too many overly smart people here showing off their knowledge of security systems but everyone seems to be getting it wrong or missing the concept.

One person refers to OTP, which typically means One Time Pad and is an encryption technique, but mistakenly calls it One Time Password, which is a totally different thing entirely.

The bottom line is that it is just a second very long password and it is akin to other companies or websites asking you originally for a secret word or phrase and then when logging in they ask something like: "type the 3rd, 5th, and 7th letters of your secret".

With enough data collection, a hacker would be able to know the whole word or in the case of the Grid, the whole grid, but hopefully you have replaced it after using up a significant amount of it (I'd go with about 25% at the highest).

Since the original post is now over 9 years old, I'm posting this not for the benefit of the OP, but for anyone else that may stumble across this as I did.

It looks like an additional challenge-response layer on top of the normal password you memorize, based on Grid Multifactor Authentication « LastPass User Manual

you can login to your LastPass plugin by providing your email and Master Password as usual. After you press Submit, you will be prompted to provide 4 random values off of your Grid:

Imagine a 2 dimensional chart with a curve drawn on it. 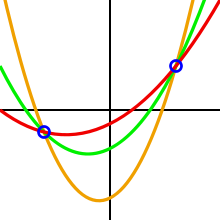 This is a simplistic explanation of Shamir's Secret Sharing Scheme (Shamir of RSA fame) and is one way that the grid authentication could work. There are other secret sharing schemes.

Not the answer you're looking for? Browse other questions tagged authentication passwords multi-factor or ask your own question.

32
How is "something you have" typically defined for "two-factor" authentication?