Can a connected USB device read all data from the USB bus?

Is it possible for a (malicious) (hardware) USB device to access all the data that is transferred through the USB bus and then read/store this information, essentially sniffing all transferred data? Or is the USB bus switched and only sends data to the correct recipient, i.e. only allowing the intended recipient to read it?

Most likely yes, but it depends

Much like PATA, SCSI, and Ethernet devices, USB devices don't directly connect to the computer. They connect to a Host Controller that manages all signaling and communication. All ports are connected to something called a Root Hub, and to each Root Hub you may connect other hubs and subsequently more hubs.

So, if a number of devices are connected to ports that lead to the same Root Hub (they're all controlled by the same Host Controller), then any of the devices can sniff the data only in the direction Computer -> Device.

I remember a colleague of mine modifying a USB stick to prevent it from ignoring data sent to other devices. So if you plug that modified USB stick to a computer, you can capture all the files copied to other USB sticks on the same computer.

@Polynomial's comment made me question the whole answer, since my information is based on my colleague's description. To be sure, I tried to find some reference. I dug in the USB specs and I found this: 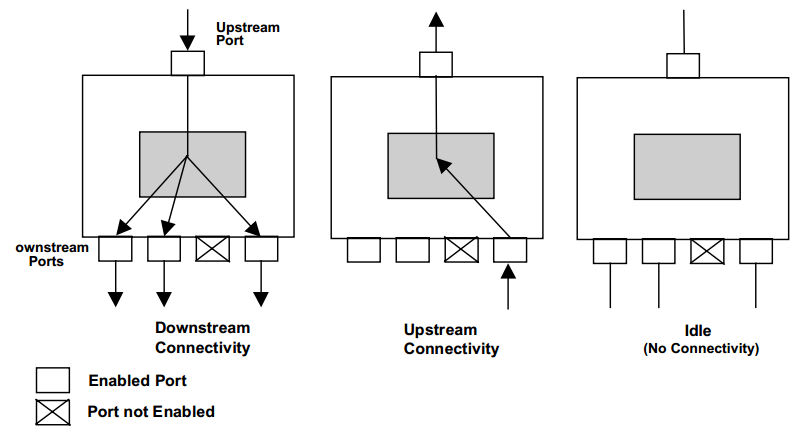 ... In the downstream direction, hubs operate in a broadcast mode. When a hub detects the start of a packet on its upstream facing port, it establishes connectivity to all enabled downstream facing ports. If a port is not enabled, it does not propagate packet signaling downstream.

USB 2.0 works through a unidirectional broadcast system. When a host sends a packet, all downstream devices will see that traffic. If the host wishes to communicate with a specific device, it must include the address of the device in the token packet. Upstream traffic (the response from devices) are only seen by the host or hubs that are directly on the return path to the host.

The answer by Adnan is correct. However to complete the picture, for superspeed mode in Usb3.0, the packets downstream are routed by the hub instead of broadcast unlike usb2.0.

In short, the contents you write to a drive running in superspeed mode cannot be snooped.

Not the answer you're looking for? Browse other questions tagged physical sniffer usb or ask your own question.

10
Is all the alarmism around BadUSB really called for with respect to host devices?
13
Attacks via physical access to USB (DMA...?)
0
Malware hidden on a USB drive, does the malware always need to run to hide itself?

0
Cain and Abel Sniffing vs APR
15
Can the BadUSB exploit be prevented?
2
Protecting data on a remote device
3
Risk when attacker has only physical access to a computer's USB port
3
"Mousejack" a wired (non-wireless) mouse
61
How worried should I be about getting hacked with PoisonTap?
3
Is it possible to hack a device via the USB port on an airplane?
4
Can an air-gapped PC receive malicious code even when completely clean, apart from all physically attacks?
2
Is there a risk in rebooting a smartphone while it's connected to an unknown USB port?
9
Does connecting an android device via usb to a PC pose a risk if charging is selected?