Why would a remote desktop connection harm my PC?

This is a good question! First a disclaimer that I'm not really qualified to give a complete answer, as I have so far been fairly good at avoiding RDP security issues in untrusted environments. I do use both RDP clients and servers though, but only ever on trusted hosts. That said, I do have a few thoughts why we're seeing such warnings;

It would be fairly reasonable to assume that the majority of security risks would be undertaken by running a RDP server (what Microsoft calls Remote Desktop Services), and there were some quite infamous exploits of it in the past, for example vulnerability to the pass-the-hash or MiTM attacks on non-encrypted connections. We probably still all remember disabling Remote Assistance and removing associated port exceptions in firewalls as one of the first things we did upon installing Windows XP, for example. But risks involved in using a RDP client (or Remote Desktop Connection in Microsoft's terminology) don't seem so self-obvious.

For a more in-depth explanation on terminology used and distinction between a RDP client and a RDP server, please see the update at the end of my answer. But to make things clearer, this is the warning dialog that OP is talking about in the question: 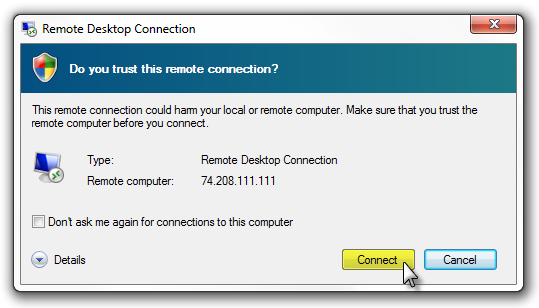 While I haven't been able to find documentation on any recent self-propagating exploits (i.e. viruses, trojans, or worms) taking advantage of Remote Desktop Connections through the use of the updated RDP protocol clients, especially those using TLS, there are still some risks involved with connecting to untrusted RDP servers:

Honestly, I've probably left out a lot of other possibilities to abuse users trust in the RDP server they're establishing a session with, especially when RDP server can not be trusted but the user assumes this trust anyway, failing to see the potential danger in doing so. But these four example attack vectors should be hopefully enough to demonstrate that there is a clear need for such warnings you're receiving.

Edit to add: Seeing there's some confusion regarding terminology used in my and other answers (which we all use in same way as far as I can tell), I want to clear things up which of the two ends involved in a RDP session is considered a client, and which a server (or a host). These are the excerpts from Wikipedia, to exclude any biased and opinion based explanation:

Wikipedia on Client (computing): A client is a piece of computer hardware or software that accesses a service made available by a server. The server is often (but not always) on another computer system, in which case the client accesses the service by way of a network. The term applies to programs or devices that are part of a client–server model

A client is a computer program that, as part of its operation, relies on sending a request to another computer program (which may or may not be located on another computer). For example, web browsers are clients that connect to web servers and retrieve web pages for display. Email clients retrieve email from mail servers. Online chat uses a variety of clients, which vary depending on the chat protocol being used. Multiplayer video games or online video games may run as a client on each computer. The term "client" may also be applied to computers or devices that run the client software or users that use the client software.

Wikipedia on Server (computing): A server is a system (software and suitable computer hardware) that responds to requests across a computer network to provide, or help to provide, a network service. Servers can be run on a dedicated computer, which is also often referred to as "the server", but many networked computers are capable of hosting servers. In many cases, a computer can provide several services and have several servers running.

Servers operate within a client-server architecture, servers are computer programs running to serve the requests of other programs, the clients. Thus, the server performs some task on behalf of clients. The clients typically connect to the server through the network but may run on the same computer. In the context of Internet Protocol (IP) networking, a server is a program that operates as a socket listener.

To put this into perspective how this terminology applies to a RDP session, I'm also including excerpts from the previously linked RDP server (Remote Desktop Services) and RDP client (Remote Desktop Connection) Wikipedia pages:

Remote Desktop Connection (RDC, also called Remote Desktop, formerly known as Microsoft Terminal Services Client, or mstsc) is the client application for Remote Desktop Services. It allows a user to remotely log in to a networked computer running the terminal services server. RDC presents the desktop interface (or application GUI) of the remote system, as if it were accessed locally.

The server component of Remote Desktop Services is Terminal Server (termdd.sys), which listens on TCP port 3389. When an RDP client connects to this port, it is tagged with a unique SessionID and associated with a freshly spawned console session (Session 0, keyboard, mouse and character mode UI only). The login subsystem (winlogon.exe) and the GDI graphics subsystem is then initiated, which handles the job of authenticating the user and presenting the GUI.

And to put it visually, Remote Desktop Connection client on Windows 8 looks like this before establishing a RDP session: 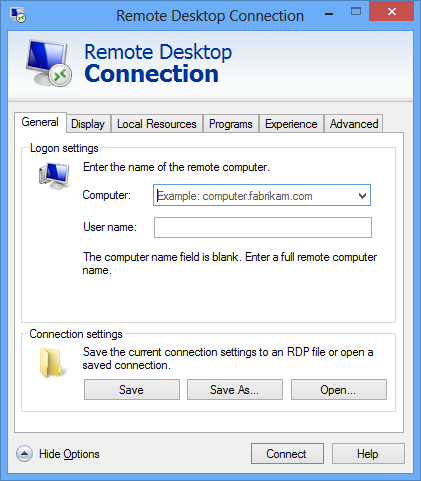 A basic RDP client will, by default, share the clipboard through the RDP session (because it is very convenient). This alone allows the remote server to obtain a copy of everything you select and "copy" on your client, be they text excerpts, files... which is a glaring security issue when the remote host is hostile. Similarly, an hostile server may inject hostile code in the copy&paste mechanism: if you do a copy&paste of a file from a directory on your desktop system to another directory on your desktop system, then the hostile server may intercept the copy and alter the file in transit, thus injecting a virus (if the file is executable in some way).

The theory is that an hostile server cannot do anything bad to the client if all of the following are true:

Betting that any of these three conditions is met, let alone that all three are met, would strike me as rather risky...

Even the much simpler situation of doing a text-only SSH connection to an untrusted server is possibly dangerous.

In malware analysis (for example), one would never connect to an untrusted and potentially infected system without taking the appropriate precautions like using a VM which can be deleted afterwards when it becomes apparent that the infected system you are analyzing is indeed infected and spreads it's nasty stuff using any available network connection. In your case, that would be the remote desktop connection you're about to "trust" when clicking that OK button.

And that's the reason why it reads you need to make sure you are connecting to a trusted computer.

Always keep in mind that a remote desktop connection is - in it's core - nothing else than a bi-directional network connection between two computers. Therefore, all network-related risks are relevant here.

You can't imagine how many non-benign packets I've seen transported over remote desktop connections while I analyzed systems. Those would have instantly infected your system and in most cases you probably wouldn't notice it before harm is done. Trust me, that's the last thing you want to happen...

The message may raise an eyebrow when first reading it, but as soon as you realize what you are about to do (create a "trusted" network connection to a remote system), the warning sure makes sense.

In case you missed it: on June 11, 2013, Microsoft had to call out a particularly important patch (MS12-037) which addressed (among other things) a critical flaw in the remote desktop protocol of all Windows operating systems (RDP). If you want to be as secure as possible, make sure you've applied the latest updates and security patches to your system.

2
Remote Connection Tampering
3
How to exfiltrate data over remote desktop
25
What type of permanent damage could be done to my computer through remote access (TeamViewer)?
1
Remote Worker Sharepoint Access Permissions
1
Hijacked certificate and Remote Login. Office computer compromised with a virus?
60
Why do "remote desktop" software (allegedly) commonly have a "blackout" feature?
1
How dangerous is Code With Me, a remote pair programming tool from Jetbrains?