Should I use FileZilla?

Recently, an increasing number of people have started advising moving away from FileZilla. However, the only reason I can see for this is that FileZilla stores the connection information in a completely unencrypted form, but as Mozilla says - surely it is the job of the operating system to protect the configuration files?

So, is there any other reason why I should no longer use FileZilla, as I've never had any problems with it? Somebody mentioned to me that the way it works isn't secure either, but I think they were just getting confused over the fact FTP transmits passwords in plain text anyway.

FileZilla per se isn't inherently insecure. Yes, it's storing passwords in plaintext, but the alternatives are only slightly more secure. You see, encrypting the credentials requires an encryption key which needs to be stored somewhere. If a malware is running on your user account, they have as much access to what you (or any other application running at the same level) have. Meaning they will also have access to the encryption keys or the keys encrypting the encryption keys and so on.

Your best option here is to disable password storage in FileZilla 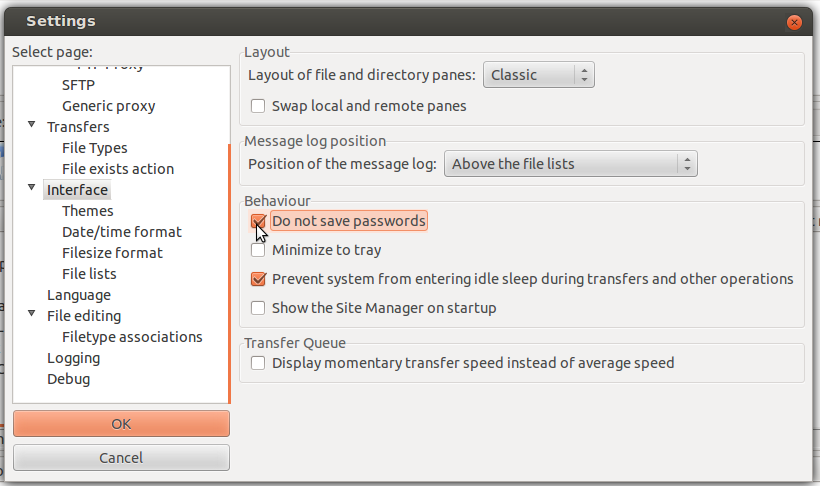 Finally (and perhaps this is a bit outside the scope of your question), please make sure you move away from FTP in favor of SFTP.

Unless your alternative has an option where you need to provide a password (which is used to encrypt your settings containing IPs and credentials), I wouldn't see why you would need to migrate away.

If you are migrating from one application to another, you need to make sure why (in detail) the new application is better than the previous application.

I think one of the main reason people advise to move away from Filezilla is clearly the fact passwords are stored as plain text and thus, easilly stolen. Filezilla bad reputation began some years ago when some malwares began to target specifically Filezilla. Using critical flaws in third party softwares (namely flash and acrobat reader) these malwares were able to steal the XML passowrd file Filezilla uses to store the passwords. Most of the time, these malwares were eradicated and cleaned in a few seconds, but the data was stolen. These stolen credential files were then handled in a very complicated bot zombie network which connected to each and every ftp contained in the file, scanned it then propagated malware in every index.html/php file found on these FTP. In less than 2 hours, all the ftp websites stored in filezilla were infected. At the time, the process has been very well documented by some victim webmasters.

The second reason people advise to move away from Filezilla is the reaction of the developper team : instead of adding this feature, they just refused every argument, either sending back the responsibility to badly secured systems or pretending that encrypting passwords would not change anything, that it was system's responsibility to secure data.

So for now, if you still want to use Filezilla (which is a good ftp client) you really should consider disabling all password storing options and using a third party tool like Keepass. It's a bit of a pain in the * but it's safer. You may even find bonus advantages with Keepass because you'll have a tool to centralize cross-protocol credentials in a safer way

It may be because they recently made deals to start bundling malware with their downloads, and one of their developers has given people real bad attitude, claiming things from it's not malware to it's not his decision to quips like you can choose not to install it once you first install the malware laden installer.

It could be the passwords stored in plain text, but I really doubt that's so much an issue to the security crowd as bundling malware in the installer, adding options that nuke all your passwords poorly in the quickconnect bar, and just the recently poor attitude towards people trying to complain about these recent-ish changes. The attitude seems to be that you can always opt out of the malware install options if you know what your doing, once you download the malware laden installer.

FileZilla does come with malware now and the developers are aware and probably getting money from it.

Search for FileZilla Premieropinion in Google or read any of the MANY threads on Filezilla's forum:

The developer keeps saying that you have the option to opt-out but the installer is CLEARLY designed to misguide people. I work on the tech industry (so I am generally aware of security concerns) and I got fooled, like countless others. It was also my first experience of malware with Macs.

I will never use FileZilla again. Even if you can "opt-out" this is clearly designed to fool the users and worst of all the developer is just copy pasting a dishonest reply on FileZilla's forums. So even if the software might still work, I will never accept the attitude of the developer. The issue is not trying to monetize your work. The issue is trying to fool your users.

Regarding the issue mentioned by Adi about passwords being stored in plain text, it's good to know that since version 3.26.0-rc1 (2017-05-25), FileZilla has support for encrypted passwords protected by a master password. Hence, there is no reason to say that FileZilla is less secure than other FTP clients. 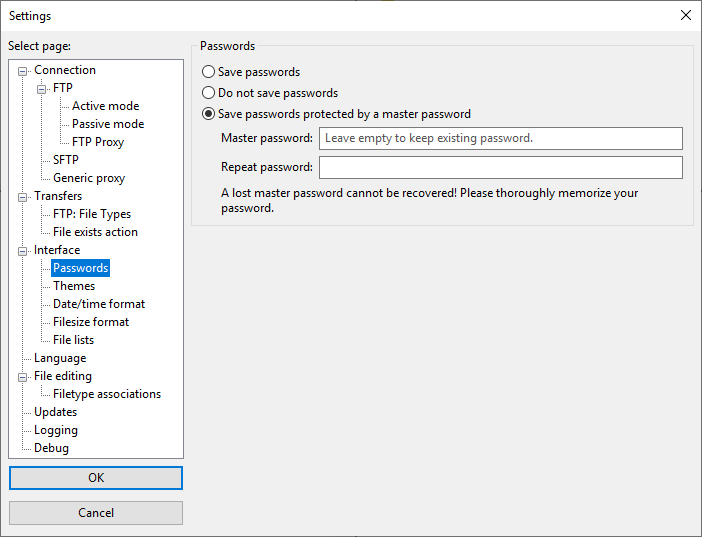 Not the answer you're looking for? Browse other questions tagged password-management ftp or ask your own question.

6
Should your client SSL Trusted Authority contain only root and intermediate certificates?
10
Should I tunnel multiple TCP connections through a TLS/SSL tunnel or use TLS/SSL for each connection?
43
What type of pattern should I use for my passwords?
5
Should I use Google Accounts or my own hashed password system?
1
Poor man's 2FA. Should I use composite passwords and how much does entropy matter?
28
Is it safer to use a port other than 21 for FTP?
1
Filezilla for macOS - Virus?
3
How can I verify the certificates when connecting to an FTP server with Filezilla?