In which ways could a javascript making a cross domain HEAD request be a threat?

I was just reading this answer to the question Why is the same origin policy so important?

Basically, when you try to make an XMLHttpRequest to a different domain, the browser will do one of two things:

But a HEAD request won't receive anything other than headers and a status, which I would believe to be at least as secure as an OPTIONS request, yet it would effectively be blocked.

There are some exceptions to this general policy. For example, some parts of HTML's Location interface are available across origins (e.g., to allow for navigating other browsing contexts).

Is there a security reason why HEAD is effectively blocked by the same-origin policy?

There's two issues with cross-domain requests: whether a request makes it to the server and whether a response is visible to the client script that issued the request. So-called "simple" requests (which use a "simple" method and include only "simple" headers) are guaranteed to make it to the server, but their visibility to the client script still depends on appropriate CORS headers. Non-simple requests are not immediately sent to the server; first, the browser sends a "preflight" request (using OPTIONS) and uses the headers in that preflight response to decide whether to send the actual request. This is because non-simple requests might alter server state, and thus could cause damage even if the client was forbidden from seeing the response.

Let's be clear that the result of a preflight OPTIONS request is never made available to the client script. It is only used privately by the browser to decide whether to perform the actual request initiated by the script: 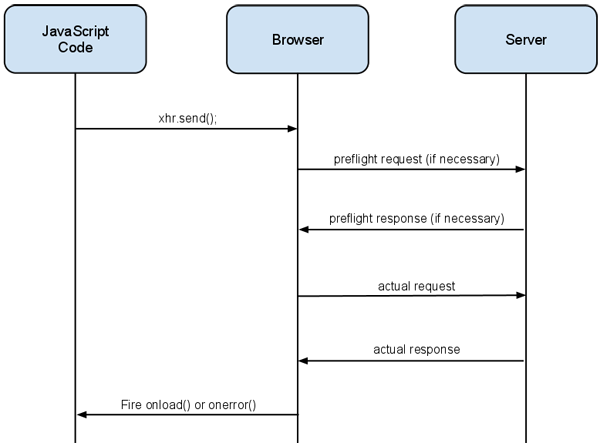 If you wrote a script that tried to make an actual (i.e., client-visible) OPTIONS request, it would be subject to normal CORS rules:

But a HEAD request won't receive anything other than headers and a status... yet it would effectively be blocked.

This is not true: the visibility of the result might be blocked, but the request is not. This is because the HEAD method is a simple method according to CORS and thus does not necessitate a preflight, just like GET and POST:

A method is said to be a simple method if it is a case-sensitive match for one of the following:

A simple cross-domain HEAD request still requires an acceptable Access-Control-Allow-Origin response, but it does not require a preflight. Therefore, a simple HEAD request (i.e., one that has no special headers necessitating a preflight) will always be sent directly to the server.

To answer the title question in your title, "How could a JavaScript making a cross-domain HEAD request be a threat?": it's a threat roughly on the order of allowing a cross-domain GET request, since HEAD should be --according to the HTTP spec -- the same as making a GET request, but without the response body. There's still the potential for lots of sensitive data to leak through headers and status codes.

Not the answer you're looking for? Browse other questions tagged javascript http same-origin-policy or ask your own question.