Recommended # of iterations when using PKBDF2-SHA256?

I'm curious if anyone has any advice or points of reference when it comes to determining how many iterations is 'good enough' when using PBKDF2 (specifically with SHA-256). Certainly, 'good enough' is subjective and hard to define, varies by application & risk profile, and what's 'good enough' today is likely not 'good enough' tomorrow...

But the question remains, what does the industry currently think 'good enough' is? What reference points are available for comparison?

I'd appreciate any additional references or feedback about how you determined how many iterations was 'good enough' for your application.

As additional background, I'm considering PBKDF2-SHA256 as the method used to hash user passwords for storage for a security conscious web site. My planned PBKDF2 salt is: a per-user random salt (stored in the clear with each user record) XOR'ed with a global salt. The objective is to increase the cost of brute forcing passwords and to avoid revealing pairs of users with identical passwords.

You should use the maximum number of rounds which is tolerable, performance-wise, in your application. The number of rounds is a slowdown factor, which you use on the basis that under normal usage conditions, such a slowdown has negligible impact for you (the user will not see it, the extra CPU cost does not imply buying a bigger server, and so on). This heavily depends on the operational context: what machines are involved, how many user authentications per second... so there is no one-size-fits-all response.

Your goal is to make the average cost to break a single password exceed the attacker's patience, so that he does not even try, and goes on to concentrate on another, easier target. With the notations detailed above, this means that you want:

p is beyond your control; it can be estimated with regards to the value of the data and systems protected by the user passwords. Let's say that p is one month (if it takes more than one month, the attacker will not bother trying). You can make f smaller by buying a bigger server; on the other hand, the attacker will try to make f bigger by buying bigger machines. An aggravating point is that password cracking is an embarrassingly parallel task, so the attacker will get a large boost by using a GPU which supports general programming; so a typical f will still range in the order of a few hundreds.

n relates to the quality of the passwords, which you can somehow influence through a strict password-selection policy, but realistically you will have a hard time getting a value of n beyond, say, 32 bits. If you try to enforce stronger passwords, users will begin to actively fight you, with workarounds such as reusing passwords from elsewhere, writing passwords on sticky notes, and so on.

So the remaining parameter is v. With f = 200 (an attacker with a dozen good GPU), a patience of one month, and n = 32, you need v to be at least 241 milliseconds (note: I initially wrote "8 milliseconds" here, which is wrong -- this is the figure for a patience of one day instead of one month). So you should set the number of rounds in PBKDF2 such that computing it over a single password takes at least that much time on your server. You will still be able to verify four passwords per second with a single core, so the CPU impact is probably negligible(*). Actually, it is safer to use more rounds than that, because, let's face it, getting 32 bits worth of entropy out of the average user password is a bit optimistic; on the other hand, not many attacks will devote dozens of PC for one full month to the task of cracking a single password, so maybe an "attacker's patience" of one day is more realistic, leading to a password verification cost of 8 milliseconds.

So you need to make a few benchmarks. Also, the above works as long as your PBKDF2/SHA-256 implementation is fast. For instance, if you use a fully C#/Java-based implementation, you will get the typical 2 to 3 slowdown factor (compared to C or assembly) for CPU-intensive tasks; in the notations above, this is equivalent to multiplying f by 2 or 3. As a comparison baseline, a 2.4 GHz Core2 CPU can perform about 2.3 millions of elementary SHA-256 computations per second (with a single core), so this would imply, on that CPU, about 20000 rounds to achieve the "8 milliseconds" goal.

(*) Take care that making password verification more expensive also makes your server more vulnerable to Denial-of-Service attacks. You should apply some basic countermeasures, such as temporarily blacklisting client IP addresses that send too many requests per second. You need to do that anyway, to thwart online dictionary attacks.

Run openssl speed on the command line to get an idea of how fast message digest functions are. I can calculate about 1.6 million sha256 hashes a second or about 145 Billion guesses per day on my quad core 2.2ghz sandy bridge. If someone has a password that is in the English dictionary and used one round of sha256 then it would take longer to load the word list off the disk than to iterate over the list to break the hash. If you did PKBDF2-SHA256 with a a few hundred thousand rounds it would take a few few minutes to break. Enforcing a strong password policy helps, a lot.

The real answer: How much time do you have to burn?

Thomas' answer provides a helpful baseline model and data. But the goal that he posits doesn't make sense to me. A typical attacker won't know your iteration count until after actually hacking the site and grabbing the database of hashes. Having done that, they won't move on just because you use a large iteration count. They'll try to crack as many as they can, and quite possibly publicize the hashes so others will continue trying to crack them for years to come with more and more powerful hardware. So "p" and "f" will both continue to increase long after the hack.

Also, real user passwords aren't well modeled by a complexity measure like 32 bits of entropy. The article Reusable Security: New Paper on Password Security Metrics is helpful in this regard, and documents what we've long known: many users pick easy-to-guess passwords, and there is a long tail. This also means attackers will always find some if they try hard enough.

I'd say that a more likely goal would be to protect as large a percentage of your users as possible from having their passwords cracked. E.g. table 4.2.1 of the PDF shows that if you managed to limit your attacker during some attack campaign from an average of 1 million attempts per hash down to 500,000 attempts, you might protect the passwords of 5% of your users (assuming a mix with more 7-character passwords than 8+ character passwords, thus reducing the cracked percentage from 35% to 30%). Of course the exact shape of the curve and where they are on it will vary widely.

So I'd just go for the maximum iteration count that you can budget for, so long as it doesn't delay real users doing normal logins. And you should increase the value as your compute capacity grows over the years.

Take this as a very long comment. I was curious how quick the stuff runs on my personal laptop (Thinkpad T460p, Intel i7-6700HQ). I know that for cracking salted passwords there are special devices, but if you have a web service you likely don't have special hardware for that.

As you can see, the execution time grows linearly with the number of rounds/iterations. This means the default takes roughly 281ms in mean on my machine. 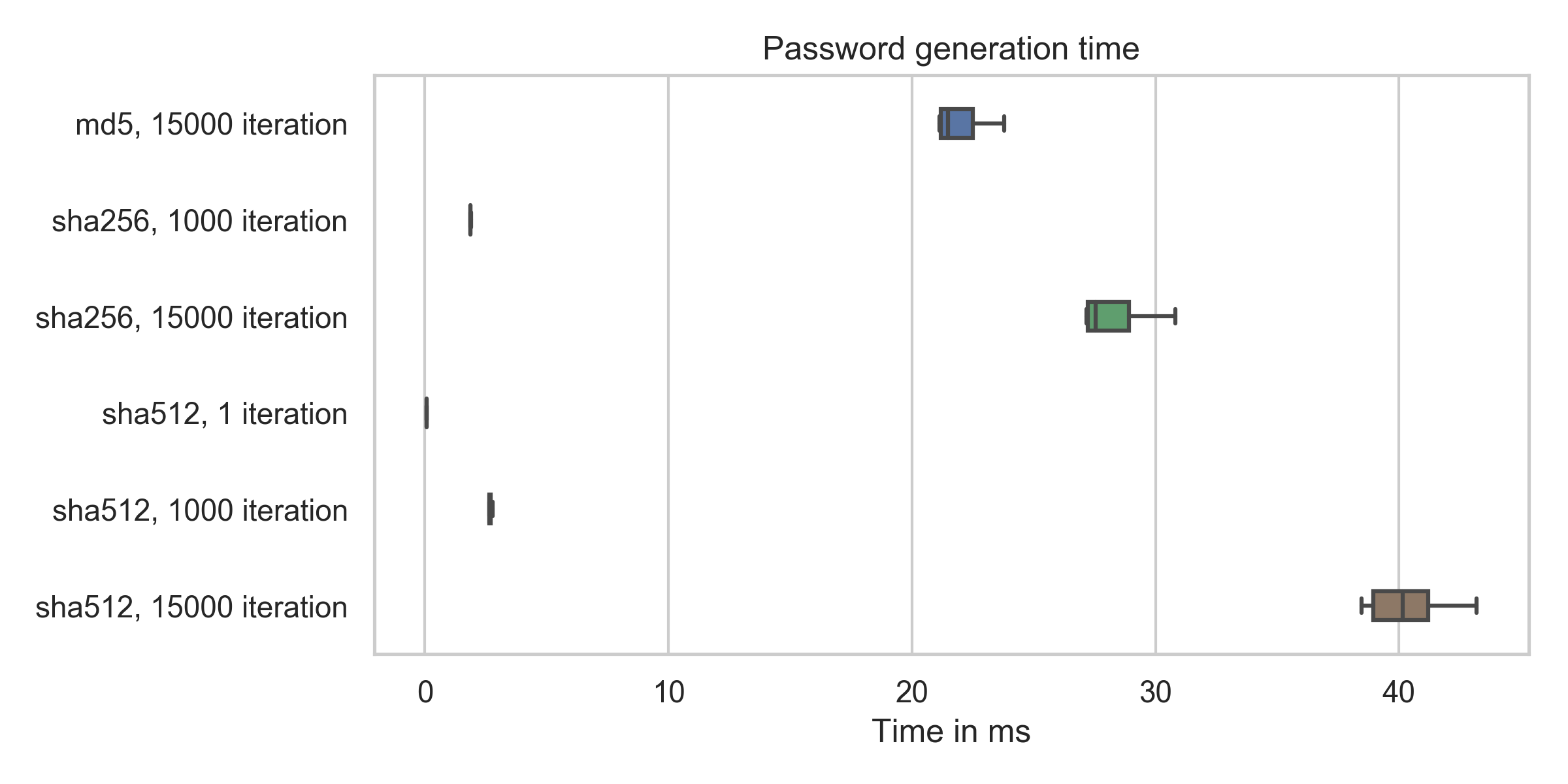 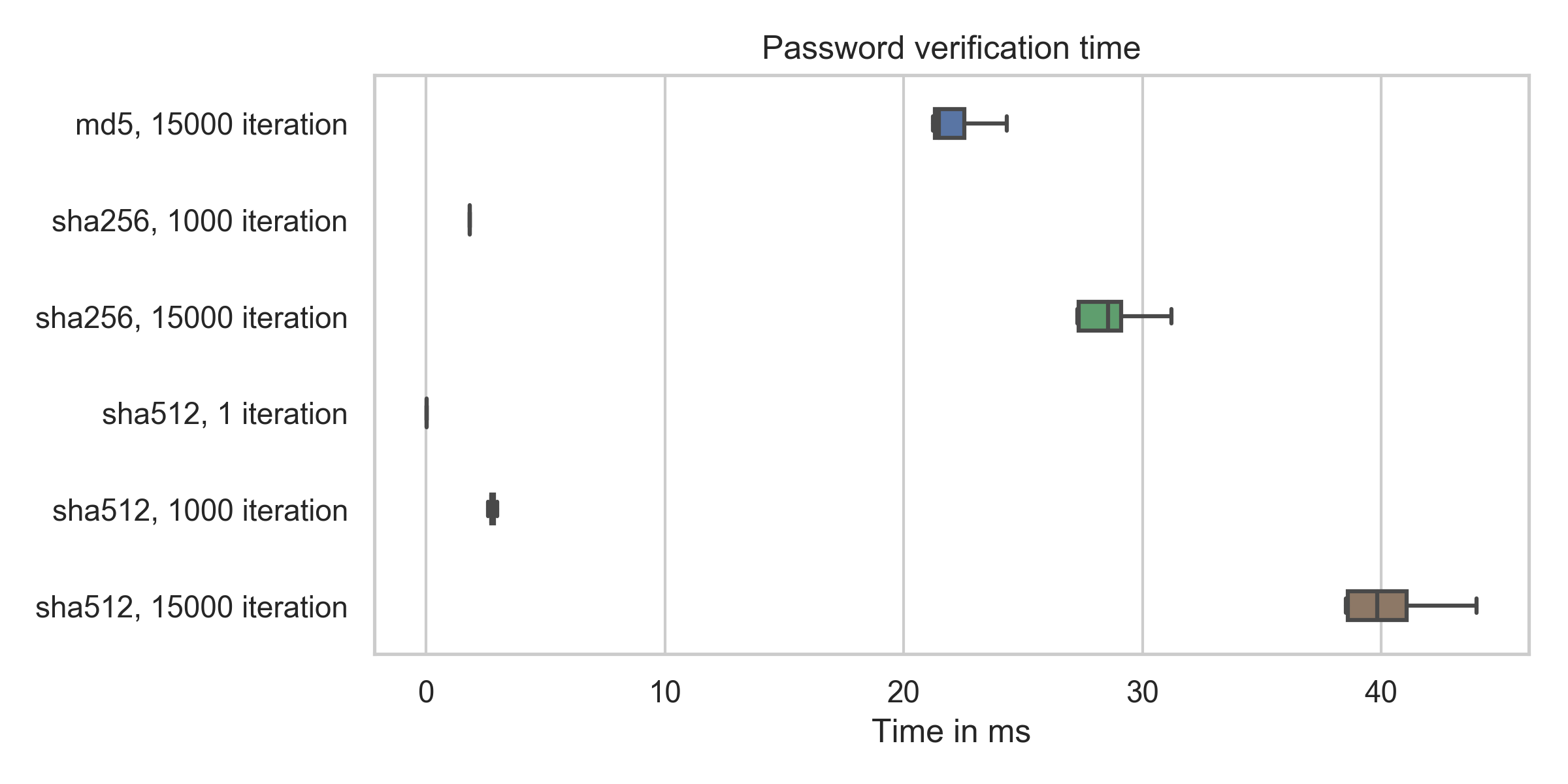 A modern machine kitted out with 8 current generation GPU's will calculate on the order of 9 billion SHA-256 hashes per second, or about 777 Trillion hashes per day, and those GPU's can perform rules based dictionary attacks.

Not the answer you're looking for? Browse other questions tagged cryptography passwords appsec hash pbkdf2 or ask your own question.

2
Is using 100,000 iterations of sha256 good enough for password storage?
103
Recommended # of rounds for bcrypt
9
Hashing length for storing password
6
Is this security/encryption scheme secure?
11
How should I choose a difficulty factor for my password hashing function?
5
Why is 8ms a goal for hashing?
8
What are the recommended scrypt cost factors for 2016?
6
If the bitcoin network was cracking bcrypt, what cost factor would you use?
6
Should password hashes be encrypted or HMACed?
6
Can I brute-force a password hash even if I don't know the hash-algorithm used?
See more linked questions

30
How big should salt be?
1
Web Service Security
1
How to combine a key and a password in practice
3
Database row level encryption scheme
4
LastPass Key Derivation Security Question
12
Parameters for PBKDF2 for password hashing
1
How to implement iterations when hashing passwords?
0
Is my authentication strategy secured?
4
aWallet Password Manager