Is it possible to brute force all 8 character passwords in an offline attack?

Brute-force techniques trying every possible combination of letters, numbers, and special characters had also succeeded at cracking all passwords of eight or fewer characters.

There are 6.63 quadrillion possible 8 character passwords that could be generated using the 94 numbers, letters, and symbols that can be typed on my keyboard. I'm skeptical that that many password combinations could actually be tested. Is it really possible to test that many possibilities in a less than a year in this day and age?

As per this link, with speed of 1,000,000,000 Passwords/sec, cracking a 8 character password composed using 96 characters takes 83.5 days. Research presented at Password^12 in Norway shows that 8 character NTLM passwords are no longer safe. They can be cracked in 6 hours on machine which cost ~$8000 in 2012.

One important thing to consider is which algorithm is used to create these hashes (assuming you are talking about hashed passwords). If some computationally intensive algorithm is used, then the rate of password cracking can be reduced significantly. In the link above, author highlights that "the new cluster, even with its four-fold increase in speed, can make only 71,000 guesses against Bcrypt and 364,000 guesses against SHA512crypt." 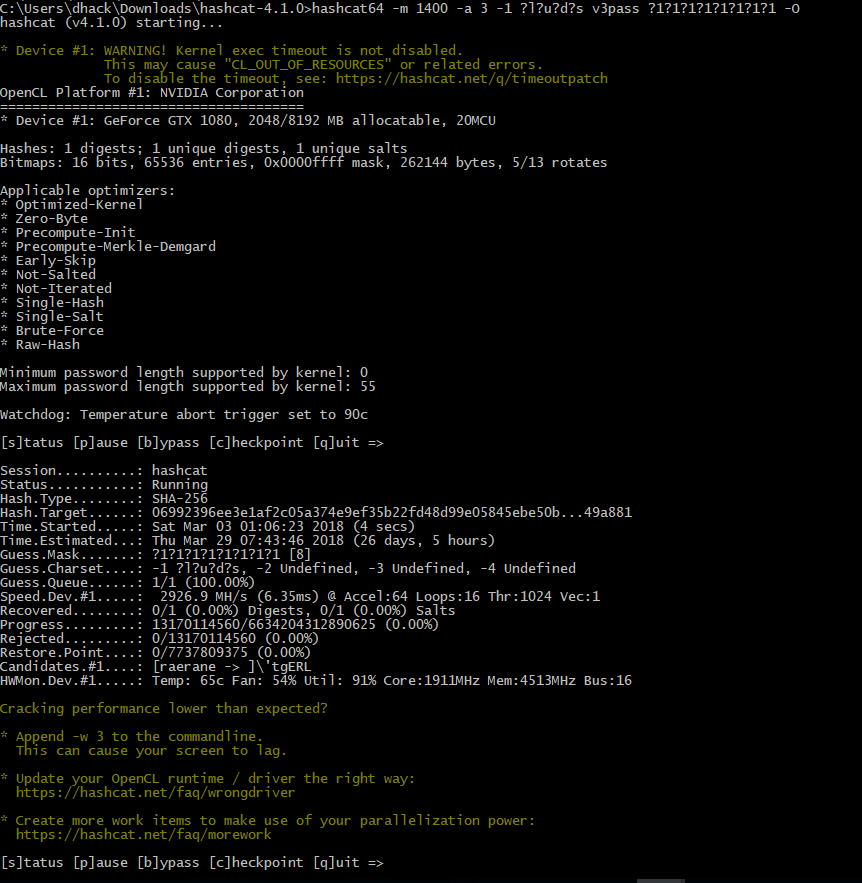 Here's a picture of a mining rig with GPUs that could also just as well be set up for hash cracking: 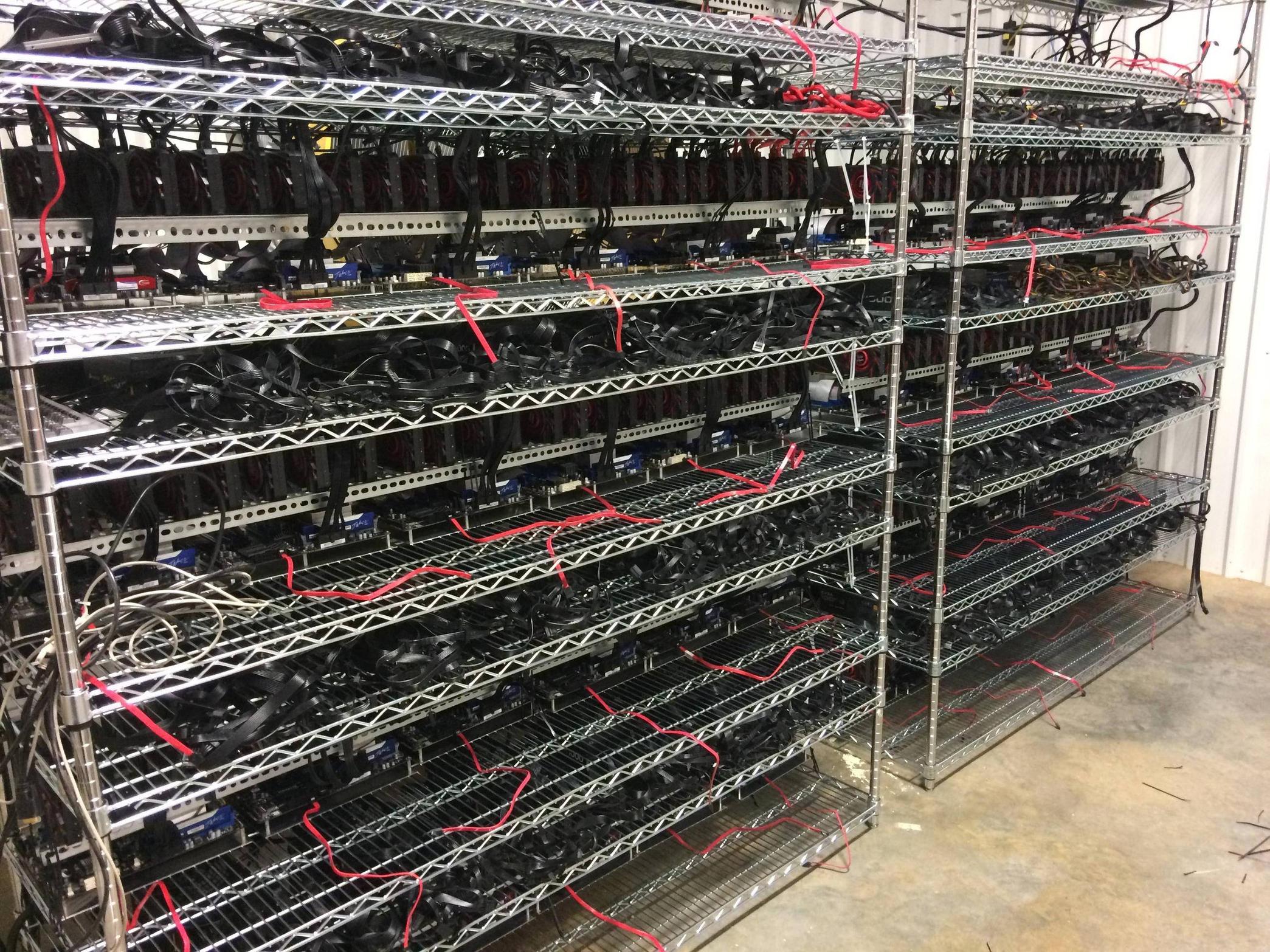 Possible? yes, but what brute force recovery duration is accepted as possible? Some numbers for 8 chars PW if randomly chosen from a 94 character set:

So it is 'possible' for certain cases for us, may be yes in all above cases for some agencies.

Suppose your set of 'obtained' hashes contained 5 million password hashes, then even for the 98 year WiFi case, 145 keys will be found on day 1 (on average). If your password is amongst them, then you experience that also for the WiFi case it is indeed possible! .... if my calculations are right

I know of one modest demonstration (Feb 2012, link) that claimed the power to make 400 billion guesses a second on a 25 GPU system. In that case, an 8 digit password would be blown in less than 6 hours; sooner depending on the brute-force method. But that assumes the attacker has access to the file that stores the encrypted password. And frankly, that is easy to do, if you have access to the computer itself. Even if you can't get to the HDD, the attacker would simply replace the keyboard with a computer that would send 'keystrokes' much faster than you could type. It might take longer, due to the speed of the USB connection, but human typing rate is not a good reference on this matter.

On the issue of characters used in a password, this is not quite as simple as most people state. What matters most is what the attacker expects to have to tried, not what characters you chose. In other words, what matters most is what characters EVERYONE in the system uses, not just you. For example, a random sequence of 'X', 'Y' and 'Z' is just as hard to guess as a random sequence of all letters of the alphabet...as long as the attackers doesn't know you prefer X, Y, and Z. But if, despite the availability of 100 digits, it is known to the attacker that everyone is using only X, Y and Z, then the attacker can narrow down the brute-force attack and negate the benefit of 100 digit security system. The principal of this is identical to that of the dictionary attack. This is why sysadmins might force everyone to use different character types; to make sure that a would-be intruder has to try all permutations.

This is not to say the specific characters used in a password don't affect the speed at which it is broken. That is, when someone says "an 8 digit passwords take 10 years break," that 10 years is the MAXIMUM time required. A more accurate statement would be, "it takes 10 years to test all combination of 8 digit passwords." But the fact is that some passwords would be guessed much faster depending on the character selection and attack method. For example, if your password 100-character alphanumeric system (e.g. 0-9......A-Z), and the brute-force attack uses sequential guesses, then a password starting with a '0' will be broken at least 100x faster than a password that starts with LAST character in that sequence (let's call it 'Z'). But this is tricky to deal with since you can never know what order the attacker may use. For example, does the attacker consider A or 0 the first digit? And is Z or 9 the last digit? Or if the attacker knows that everyone uses passwords that starts with characters towards the end of the alphabet, then he/she may try brute-force in reverse-sequence, and the password that starts with '0' will be safer.

Unfortunately, the speed at which passwords are broken is as much about the number of digits as it is the predictability of human behaviour.

Once an algorithm or a heuristic logic is applied it not called brute force anymore.

Another reason is that if I had chosen a hard 8 character password like j$d1Ya+3 the "smart" techniques are not going to help much, so some folks do want to understand how long will it take the brute force to work.

From the bit9 blog:

In order for a password to be considered secure, it needs to be truly random and unique.

What Does it Mean to Be Truly Random?

Many people often choose a base word for their password, like “password,” and transform it to be logically “complex.” So they’ll replace letters with special characters or digits and add some capitalizations. So a password that was “password” becomes P@55w0rD. In fact, if each letter could be one of an uppercase, lowercase, or special character, there are 6,561 (38) versions of “password” – which is far from an unbreakable amount.

Thus, a hacker using a brute force technique isn’t just going to start with “aaaaaaaa” and go down the list, “aaaaaaab”, “aaaaaaac”, etc. He is going to apply intelligence to the cracking. That intelligence most often involves using common base words. So not only will he try cracking the very simple “password” but also all 6,561 versions, to include the complex “P@55w0rD”.

There are approximately 220,000 dictionary base words, meaning that even if you added up to three extra digits to your transformed, base-word-based password and formed something like “P@55w0rD123,” a computer would take about 26 minutes to crack it – no matter how long the password is. With complete randomness in a password, hackers can’t make common base word assumptions about your password and cut down the brute force space.

But that’s not all. A secure password must also be unique.

What Does it Mean to Be Unique?

Unfortunately, some companies still store actual text passwords in their databases instead of the hashes so if a hacker gets into the system, he now has more base words to add to his roster. So if you use the same password, or even base word, for two accounts and one of those is compromised, no matter how long or random it is, that hash and password are now known. The hacker can then log in to any account that you are using the same password for. This also means that if someone else uses your password, or some version of it as outlined above, you are compromised.

8
How can hackers guess passwords (using dictionary attack or brute force) without being locked out?
106
Why did customer services say using symbols in a password is insecure?
4
Do password crackers / brute-force attacks put a higher priority on "picture-passwords"?
4
What makes one random strong password more resistant to a brute force search than another
3
"Targeted" Brute-Force an Local App password
0
Is this possible to brute force 25 billions billions password in less than a month?
0
Limiting the number of duplicate character types in crunch