Idea for hiding your mobile phones' location, and still be able to place and receive calls. Any suggestions?

The diagram below is a thought experiment that could provide a certain level of privacy to mobile (smart)phone users, beyond what they currently have. Some of it is purely theoretical, but it should nonetheless be possible.

I would love some thoughts/advice/criticism on this: 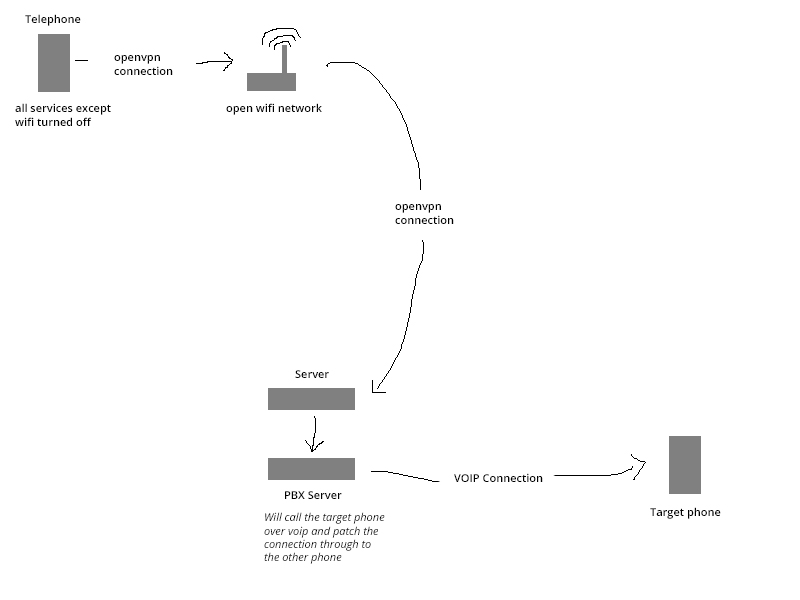 You haven't stated the security problem you are trying to solve, so I'm going to default to "defeating government snooping".

There's no reason this wouldn't work from a technical point of view, though from a business perspective it is impractical and would get very few takers. The primary problem with it is that it will be challenging from a wifi access perspective. Mobile telephone companies have spent billions on the infrastructure to establish quality coverage over wide areas, you're talking about people giving that up in favor of wifi services that are spotty even in metropolitan areas. I personally wouldn't use it.

Also, in order to really ensure privacy you'd have to develop your own mobile telephone OS, and prevent it from going to any app stores. Who knows what back-doors the mobile company put in the android distro they put your phone? Installed apps can have all sorts of snooping capabilities, so if you don't control for these things there's no point in your design.

Lastly, say you build this and some people start using it, nothing is going to stop governments from knocking on the VoIP provider's door and demanding that they give them their phone records. In fact, in many places any phone provider is already compelled to by law. So you'd be substituting snooping on mobile networks with snooping on VoIP. The fact that you are going to put these calls into the phone system at all defeats the whole purpose. Information from the VoIP provider could be used to determine the location a call was made from using the IP addressing used in the VPN that was set up. You could obfuscate that by running some VPN proxies for people to connect through, although being that they'd have to be set up beyond the reach of the government you're trying to defeat you're going to have latency issues.

If you want to deliver secure communications then encrypted point to point connections are a good way to go. You can use mobile providers' own networks or WiFi for transport, whatever's available. Network availability would be much better than if you rely solely on WiFi. It doesn't matter that it goes over the mobile network as it's encrypted, and if there are secure servers somewhere out there to act as proxies (think TOR) then the end points of the connections are harder to track. Not that Skype already does much of this, however their operations and code are closed, I personally wouldn't treat it as secure or private.

It depends on the sophistication of the attacker. If they are trying to monitor your phone and are also able to monitor your home, they would see the connection coming in to the home and could trace it back to the proxy. They could then go after the proxy to get the access point. You would really need an anonymizing network capable of real time voice communication and I'm not sure that would be possible with Tor's latency.

0
Can I VPN a phone's connection to my home network, and then apply my home firewall to my phones network connections?
17
Did someone impersonate my WiFi?
4
How to prevent IoT devices from phoning home via the neighbor's wifi?
6
Is it possible to un-spoof a spoofed caller ID?
5
What does a VPN NOT protect me from?
0
Does a VPN Router also encrypts the data being sent from a mobile device
2
Are these claims about public WiFi accurate?
0
How is my employer accessing my router when employer's laptop is wirelessly connected to my home network