How can I see all code signing signatures an executable has? I know that requests for a tool are usually considered as opinion based, but I really can't find one and I don't expect many answers.

I have an executable that was signed by the vendor (for UAC purposes). The application was then tested by me and I apply my signature using Windows SDK 8 signtool /as (append signature).

I cannot see the certificate in Windows Explorer, although it says "certificate list".

Signtool /verify does not show the certificate (maybe because it reports an error for a not trusted certificate before).

I cannot get the certificate with C#, because the the class supports only one certificate (the first one). For the C# solution, I posted a question on StackOverflow.

Googling for freeware, I could not find any tools which would display all certificates. Even the demo version of the commercial PE Explorer doesn't show it.

SysInternals Sigcheck (as proposed in an answer) shows only the first signature plus the certificate chain.

In the meanwhile, there must have been an update to Microsoft Windows. Windows Explorer now shows a list of certificates. 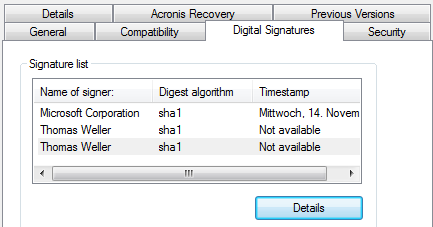 digital-signature code-signing
Share
Improve this question
edited May 23 '17 at 12:40

You can use the free osslsigncode tool for this: https://github.com/SummitRoute/osslsigncode-fork

UPDATE: The binary installed through MSYS2 using the command below is a better option (updated and non-Cygwin dependencies):

Not the answer you're looking for? Browse other questions tagged digital-signature code-signing or ask your own question.

7
Why does my rundll32.exe not have a verified signature?

1
How secure is my private key in the Windows Digital Certificate store?
3
Code Signing Confusion
23
Deprecation of SHA1 code signing certificates on Windows
2
Signing a code and application
2
How does actually countersignature work in authenticode?
0
Who am I really trusting?
0
How can we verify an installer's validity by checking its signature?