I would like to know how secure is this code I made for a login form... because I'm new in this and have serious doubts.

I can't see any way to exploit this directly at a glance but I can see a few places where the code "smells" a bit.

Although you don't use a LIKE clause in your query, if you (or someone) did change the code, a % or _ symbol could cause multiple names to match and therefore would pass that step.

Also, if you have a temporary error in the database server or at any time there is a syntax error in your SQL, $q will be NULL. We should test for that first.

Note that mysqli_num_rows() can return a string if the number of rows is greater than the highest allowable int in PHP but that's not likely to happen with this query.

You are using the same error message whether the attacker gets the username wrong or the password wrong and this is generally considered good practice. However you have two copies of that error message and that makes it easy for a future coder to change one of them without changing the other. Instead, put the error message in a variable or a constant and reference the error message where the two strings are now.

You are using mysqli but you are not using bound parameters. There are fewer mistakes that can be made with bound parameters. For example, mysql_real_escape_string() depends on the character set being used and if you change it after escaping the strings or if you set it in the wrong way ( i.e not using mysqli_set_charset() ) then you may enable SQL injection.

It's not clear from this code which hashing algorithm you are using but bcrypt (also known as CRYPT_BLOWFISH and $2a$) is the best choice in PHP.

If you're on PHP > 5.5, there's a password_hash() function which improves on crypt() but is compatible with it.

It's also not clear how you are handling salt. The bcrypt option generates salt automatically and stores it as part of the string it returns with the hash so you don't need to worry about it if you are using bcrypt.

Some of the hashing algorithms have a cost parameter. This cost should increase over time as attacker's capabilities get better and as your ability to compute the hashes gets better. (Actually, probably just the latter.)

Some other questions about your code:

There are likely to be other problem. There are plenty of pitfalls in authentication. Why not use a library like PHPass which neatly avoids many of these pitfalls for you? We've covered it here.

This is not a direct answer to your question. But, I wanted to tell you this. I just visited the page where your registration form is hosted. One thing which bothered me very much was your captcha implementation.

Your captcha challenge always consists of 5 letters which are actually 5 separate images with the filename in the format 'number.jpg'. (Refer to the pic)

A simple script, with not much difficulty can be coded to execute in a loop to send a GET request to register.php to get the page source and parse it to extract the names of the images you use as captcha and then send a POST to register.php to register the new user. Voila! Your database is being flooded now.

If I were you, I'd use libraries like Securimage for implementing captcha challenges. 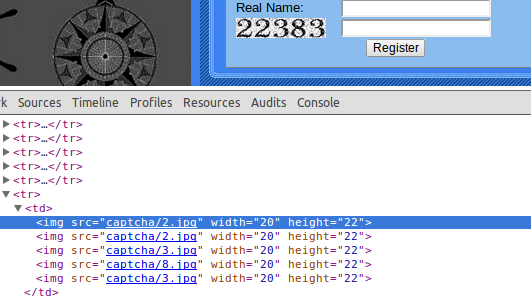 11
How should I choose a difficulty factor for my password hashing function?
6
PHP crypt() or phpass for storing passwords?