What's the best way to sandbox an X application like firefox or thunderbird in ubuntu (going into the direction of what qubes os does, but only for single applications)?

I know there are many different sandboxing technologies. For example

So there seems to be many approaches but I don't how (and why) those compare in terms of security for sandboxing X-applications like firefox or thunderbird, in terms of usability, especially in ubuntu-linux and which are production ready and well supported. Would be gread it someone could give some details about this, how to categorize them and which of them would be worth for me to have a closer look at for my purpose.

You can use subuser to sandbox an application using Docker. Say you wanted to sandbox Firefox:

You would create a folder my-subuser-images and then create a second folder firefox in the first one:

In the firefox folder, you need to create yet another sub-folder: docker-image

Once you have done that you need to create two files:

In the permissions.json file, you tell subuser what Firefox is allowed to do:

Here is an overview of the permissions that I just set:

It does NOT however, allow Firefox to access any files outside of it's own subuser. You could add a user-dirs permission to allow it to access the Downloads directory, for example, if you wished.

Once you have created a permissions.json file, you can go on to create a SubuserImagefile.

Now you are done setting up your subuser image.

You can create a firefox subuser by running:

You can run the firefox subuser by running:

You can run your internet-banking subuser with the command

You can access a subuser's home directory by visiting ~/.subuser/homes.

Here is a screen shot of Firefox running on my system with the demonstrated configuration: 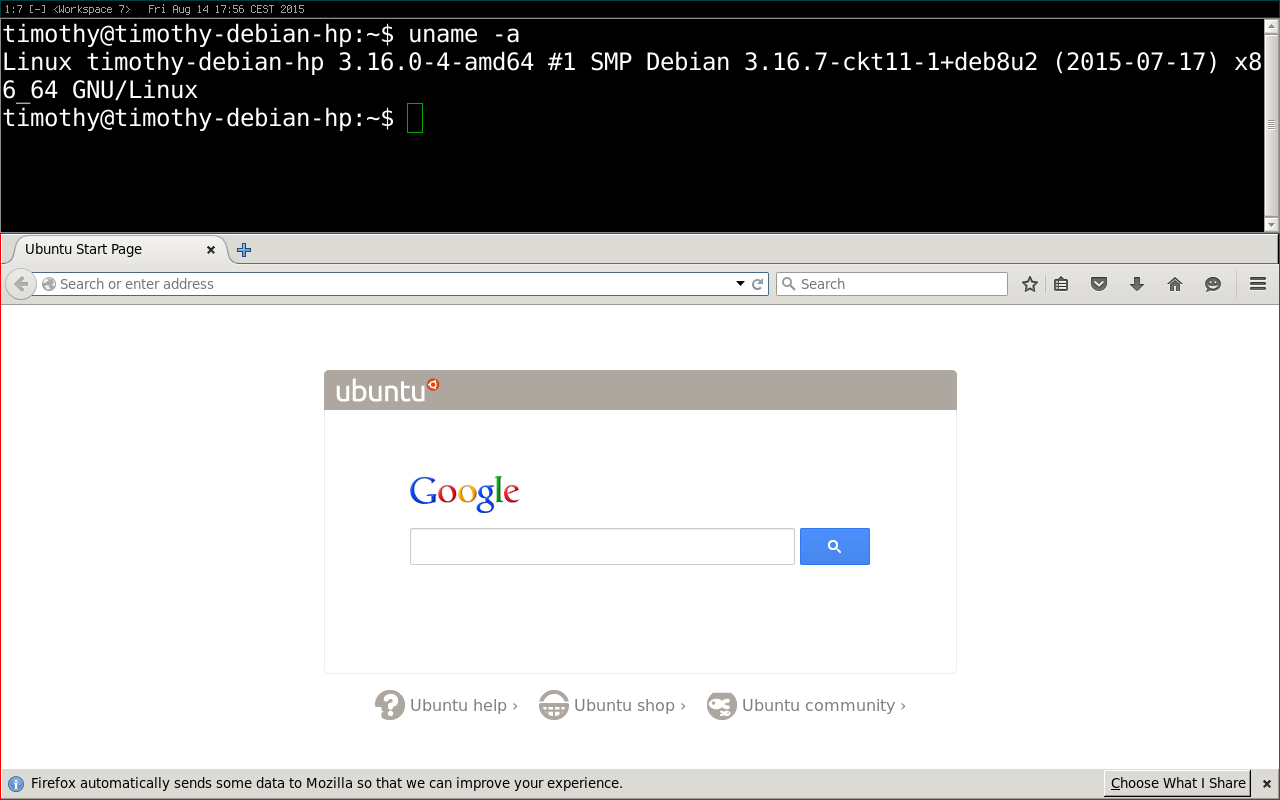 Note how despite the fact that I am running Debian, it is the Ubuntu version of Firefox that is installed!

You can share your subuser images with others, to reduce the burden of sandboxing applications for everybody. If you want to share your Firefox image, you can cd to my-subuser-images and turn that folder into a git repository:

If you then push this git repo somewhere, then others can install your Firefox image easilly with the command:

They would run that subuser in the same way as if they had done the setup locally.

The Ubuntu documentation has a sandbox command for X applications that uses SELinux:

SELinux is a nice route in that there's many web pages, books, tools, etc on using it. It integrates with the OS very nicely which is one of the reasons it's complex. Tresys sells nice tools that make it easy to configure these.

Things like SELinux descend from Orange Book era Compartmented Mode Workstations that tried to add security to vanilla OS's. The last surviving (and maintained) product I know of is Argus Pitbull line. It was only Solaris, but now is RHEL. They're much more comprehensive than SELinux, although you'll pay for that. There's also General Dynamics High Assurance Platform that combines VMWare & Linux.

The VM approach is easier to use, but more resource intensive & more features in trusted computing base. Best thing to do there is to use a very lightweight distro (CrunchBang comes to mind), add just what you need, and trim out what you don't. VM's can be restricted to individual folders via SELinux or SMACK mandatory controls if you want to allow folder sharing for moving files between host and guest.

There's also the QubesOS project that aims to make VM option more secure. It's in pretty good shape right now and easy to use.

The overall problem with your question is that neither X nor Ubuntu are designed for secure separation of mutually distrusting apps. Decades of research went into doing that for UNIX and X with plenty of prototypes/products. Having seen them & seen Ubuntu, I guarantee you they aren't doing that stuff. The SELinux stuff only does a little for that & virtual machine approaches still have plenty of attack surface (VMM, Dom0's, etc). Genode, QubesOS, Europe's Perseus Security Architecture, the OKL4/OKLinux suite, and TU Dresden's Nizza architecture are only open methods I know addressing this with Linux compatibility. Their features & completeness varies considerably.

If it's running mainstream Linux, there's 0-days waiting to be found I guarantee you. I just keep my old solution of having separate PC's, with one not online, and a KVM switch. And use of read-only media (eg CD-R's), one-way cables, or guards for moving data. And backups onto read-only media. And loading from read-only media where possible. Whole setup costs under $1,000 if one gets components cheap & accepts moderate performance. $2,000-$3,000 for high performance.

I would like to add this project to the excellent list of projects above. It can sandbox any type of processes: servers, graphical applications, and even user login sessions.

Firejail is a SUID security sandbox program that reduces the risk of security breaches by restricting the running environment of untrusted applications using Linux namespaces. It allows a process and all its descendants to have their own private view of the globally shared kernel resources, such as the network stack, process table, mount table.

2
Allow access to a directory for certain application only
0
How does Chromium's sandboxing compare to Firejail's?