What can entreprise admins do with our secured sessions?

The enterprise where I work has a proxy server that traces and filters our web activities. Employees claim that they can know the links that we visited and see the content of HTTP web sites, but they can't see the content of HTTPS secured web sites because the content would be encrypted by the server. I don't share the same idea and I think that there are plenty of ways to access the HTTPS content.

Could someone give me some type of attacks that could let them access the content of our HTTPS secured navigation or hijack our sessions?

Just guessing: One of the things that could increase the risk that they can execute a MITM attack as the image shows is the fact that they give a preinstalled Windows XP/7 system to new employees so they can install malicious certificates to these computers and make them trust additional Certification authorities 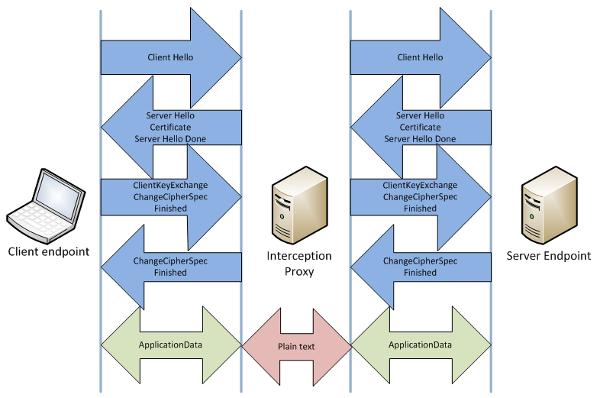 However, should a network administrator really have malicious intentions, they could, for example, snoop any usernames and passwords people enter on any website. They could also redirect websites to their own servers without the user noticing and give them false information or luring them into entering information the legitimate website isn't asking them for.

But let's assume they don't use this setup and the end-to-end encryption between client and webserver works as they believe. What other information can be logged on the proxy? While the proxy doesn't know the exact URLs you visited, it still knows which domains you contacted. So it doesn't see http://reallypervertedporn.example/videos/167642/hot_girl_on_girl_on_guy_on_goat_action_part4.flv but it still sees that you made a TLS-handshake with https://reallypervertedporn.example and received several MB of data, which might be something you have to explain.

Not the answer you're looking for? Browse other questions tagged tls man-in-the-middle proxy session-management or ask your own question.

172
Is there anything preventing the NSA from becoming a root CA?
20
Is there any reason to block HTTPS?
4
Is it possible to log web sites that require Adobe Flash?
0
Is this an insecure implementation of multi-site sessions?
1
Is an index, nonce and HMAC good enough for session management?