Is it possible to create a SMIME only PKI that *can't* be used for SSL?

Assume I have a Root CA that I want to share with hostile untrusted 3rd parties.

Then constrain this root using specific EKUs at the root.

Next, create a Policy CA (controlled by the root) to restrict the permissions granted to untrusted CAs using Path=1, and Name Constraints (also see this).

I would like to issue SMIME certificates that are for signing only, and another for encryption (I understand that support varies on this)

If the above is true; I think that it's possible to create a SMIME only PKI (please correct me if I'm wrong).

I'm particularly concerned about the ability (or lack thereof) to constrain the key usage field in the CA, so that any properly (or widely deployed client) will see that the CA chain is not permitted to issue HTTPS certificates, and will reject one if offered.

The Key Usage extension is described in section 4.2.1.3 of X.509, with the following possible flags:

It is possible to create a root CA that cannot be used for SSL by... not using it for SSL !

When a CA issues a certificate for a sub-CA, it does so within the context of a given trust contract. The sub-CA agrees to issues certificates only in accordance to a number of rules which are made explicit in the Certification Policy and the Certificate Practice Statement -- these are legal documents meant for human consumption. If you want a root CA which can be used for S/MIME but not for SSL, then the root CA must state in its CP and CPS that certificates which relate to this root CA must not be used for SSL. In particular, sub-CA take the formal oath never to issue SSL-able certificates (i.e. they won't put machine names in Subject Alt Name extension or in the Common Name part of the SubjectDN; and they will put a critical Extended Key Usage extension which says "for S/MIME only").

In pure X.509 theory, there is no actual need for rule enforcement in the validation algorithm; revocation is used to maintain order and punish misbehaving entities. However, in practice, revocation is asynchronous, and too slow to react to "flash attacks". An attacker who wants to run a fake server only needs ten minutes or so to enact considerable mischief; seeing his certificate revoked two days later won't deter him. This is why a number of PKI rules are now enforced at the validation level, first of which being incarnated by the Basic Constraints extension: a certificate owner is not granted CA power.

There is (currently) no such automatic enforcement of rules pertaining to Extended Key Usage. If a CA wants to enforce a no-SSL rule, then it must not issue certificates which can be used for SSL, and it must make sub-CA swear to comply to the same rule. Lack of such enforcement is a problem only if a sub-CA misbehaves, and the obtained certificate can be used as a SSL server certificate to perpetrate some odious crime before righteous revocation smites the offending sub-CA.

There is another point where rules can be engraved: in the clients. Clients trust root CA (that's what makes them "root CA"), but they can trust them for specific roles only. See for instance this screenshot from the certificate viewer in Firefox's preferences: 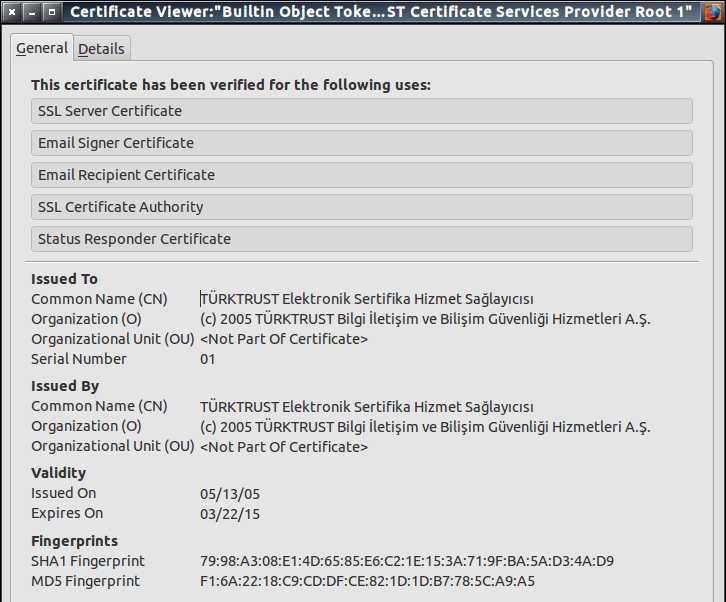 The list of "uses" is configurable and allows the client to restrict a given CA to some specific situations.

Yet it works. If you want an S/MIME-only root CA, then distribute it and have it installed in clients with the tag "for S/MIME only". This is as good as a full-path automatic EKU extension (if such a thing existed).

Not the answer you're looking for? Browse other questions tagged tls certificates public-key-infrastructure certificate-authority or ask your own question.

22
Can an intermediate CA be trusted like a self-signed root CA?
11
Root certificate key usage (non-self-signed end entity)
4
From a trust perspective, is renewing a CA certificate the same as trusting a sub-CA?
3
Security Structure of an API
3
Limiting a CA to only issue valid certificates to internal web sites and clients
5
Bidirectional encrypted server to server communication using TLS
3
Why does curl/NSS encryption library not allow a CA with the extended key usage by SEC_ERROR_INADEQUATE_CERT_TYPE?
0
Creating self-signed root CA using MacOS Keychain
5
How does selection between multiple available certificate chains work?
5
Root CA with Extended Key Usage fields