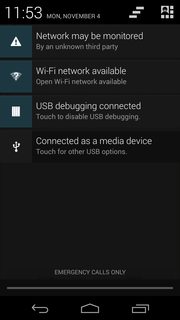 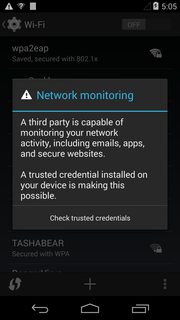 It is possible to remove this warning for a root user, or by uploading the certificate into Google Apps (and paying $5 per user/month), however I'm looking for a solution that does not incur this unnecessary cost.

Several people have posted this as a defect in the FOSS code, however the issue #62076 (starred by 121 people) has been closed as "by design". Edit: This issue has been reopened in issue 82036 Please star it to vote as an issue, or comment as needed.

Through testing I verified that this error still appears when using Name Constraints, and limiting the EKU purpose of the new Root CA. (S/MIME, client authentication, etc).

To answer your first question:

As far as I know, there is no way to circumvent this. It's a security feature.

To answer your second question:

Yes, non-default trusted root certs are definitely potentially problematic. They are often abused. They are sometimes used for workplace or traffic monitoring (which is potentially OK if adequately disclosed, though it may still feel sketchy to many), but they're also sometimes used by spyware, malicious apps written designed to snoop on your activity, and other icky stuff.

So, it's a tradeoff between (a) the risk of scaring users, when the user was already aware and nothing bad is going to happen, if you do show the warning, vs (b) the risk of users getting spied upon without their awareness, if you don't show the warning. The Android developers presumably had to make a judgement call on the relative severity and prevalence of these two risks, and presumably came down on the side of informing the user. I'm not in a position to form an independent view on this decision, but one can understand why they might have made this choice.

You linked to the issue on the Android bug tracker. Well, if you look at comment 8, you will see an explanation from an Android developer of why they chose this behavior. See also comment 39 for another scenario. So yes, there is a valid reason why they do this; whether you agree with their judgement or not, this is a public explanation of their reasoning.

I find this "feature" to be quite boneheaded. The only people that would understand it are the technical users, who would also want to turn it off. Casual users will ignore it as soon as their technical support person tells them to, which adds yet another thing that the nontechnical user is clicking through and/or ignoring, thereby defeating the point of the obstinateness (sp?) of this "feature".

In searching for a solution, I found this Q&A, but I also found an app that moves the certs from userland to systemland. "Move Certs!" over on FDROID, courtesy of How To Geek.

Not the answer you're looking for? Browse other questions tagged tls certificates certificate-authority android security-theater or ask your own question.

86
How feasible is it for a CA to be hacked? Which default trusted root certificates should I remove?
7
Where to get/buy a CSR generated S/MIME certificate
1
“A third party is capable of monitoring your network activity” with [imported] certificates?
4
From a trust perspective, is renewing a CA certificate the same as trusting a sub-CA?
6
This certificate has an invalid digital signature
4
Are there other roots of trust on my computer aside from these 46 root certificates?
9
I want trusted SMIME certificates for 3rd parties. Is this a reasonable configuration?
1
Error in SSL handshake with a web service - chain violates basic constraints limit
1
openssl certificate chain output