I'm wondering how secure is to blur face in my photos? Is there any way to re-focus, or re-blur blurred object?

In short, yes and no. You can't completely remove blur but you can definitely revert some of the changes.

If you have a choice between blurring and blacking/whiting something out, go with the latter. Blurring essentially rounds and moves things around, and with the right algorithm for certain blurs information can be revealed. By adding a layer that can't just be removed, you've removed the possibility of somebody sorting the messed up information.

Remember, you want to leave your visitors with NO information, not blurred information.

Sure, a face might be nearly impossible, but why leave a chance? It's surprisingly easy to deconvolute an image now, and who knows what could happen in the future?

Faces will probably be fine if you do it correctly (use your brain and don't just barely blur something), but for sensitive information just black it out. The government doesn't blur sensitive papers, they use thick black lines to censor it.

See: Blurring Images Not So Secure, Can we technically un-blur images?, and Why blurring sensitive information is a bad idea

Blurring removes high-frequency detail from an image (by applying a convolution that is essentially a weighted average of some kind). It is not possible to restore the original image from the blurred version,

However, it may be (usually is!) possible to restore a similar picture which has enough detail to be recognizable, and even if that is isn't possible, it may still be possible to derive sufficient information to be considered harmful, if the possible inputs are predictable enough. Worded differently, a "T" still produces a distinctly different "blob" than an "a" even if it is blurred beyond being readable, and while an "a" may produce the same blob as an "e", they are not equally likely to appear in the same context!

Simply scaling down a blurred picture of sufficiently high resolution (or thresholding it, or increasing contrast, or squinting your eyes) will usually give a surprisingly good picture that is not as unrecognizable as you might wish. Textual information (such as your credit card number) may be retrieved without being able to restore the original image simply based on the fact that character shapes are so distinct. 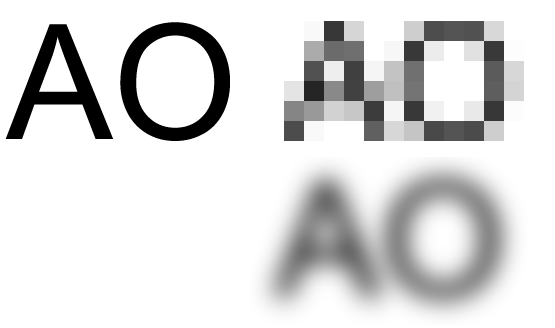 In this picture, two different convolutions are shown (a simple box filter and a gaussian filter, both with large radius). It is impossible to reconstruct the image on the left from either one because the high-frequency information has been discarded.
However, that isn't necessary at all. You can without any doubt still tell that it's the letters "AO" in either one.

Depending on what the input is and on how much you blur, this means blurring may be completely safe, kind of safe, or not safe at all.
Of course, black bars (or any other solid-color) overlay are more secure since they leave no information at all from which you could reconstruct or guess something. Unluckily, they are quite ugly whereas blurring usually looks somewhat natural and less disturbing.

As a complement to the other answer, which focus on the "unblur" feasibility, keep in mind that depending on the software used to create the image files, some formats allow to store a thumbnail version of the image within the same file (this is the case for JPEG images). A common mistake would be to blur the face on the main image, but keep the thumbnail version clear => using the thumbnail would therefore allow to retrieve the original image (not in the same quality, but potentially high enough to recognize a face for instance).

70
Is image blurring an unsafe method to obfuscate information in images?
205
How secure is 'blacking out' sensitive information using MS Paint?

1
How do private photos get stolen?
17
Can robots.txt for your face be made effective?
76
Are random URLs a safe way to protect profile photos?
3
How to secure Nikon Cameras open WIFI?
4
How identifiable is a caricature made from a photo?
1
Photo vault security
8
How can Facebook verify my face if it should not have one?
3
How do you socialize online and avoid facial recognition and other privacy breaching-tactics