How to secure a public device against abuse? [closed]

What I mean by public device?

E.g. in Germany we have small stations to charge cars powered by electricity. This stations are small towers with a flap. Behind the flap are plugs to connect the tower with your car. 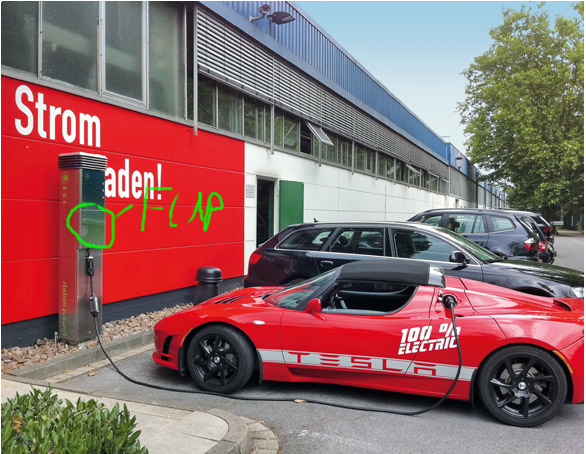 The problem is that anybody even people 100 miles away can use the app to trigger the flaps. So there may be people who abuse the this service.

How can we secure such a public service against abuse? I thought about one thing:

Stick a little button on the tower itself, which also has to be pressed in order to open the flap. 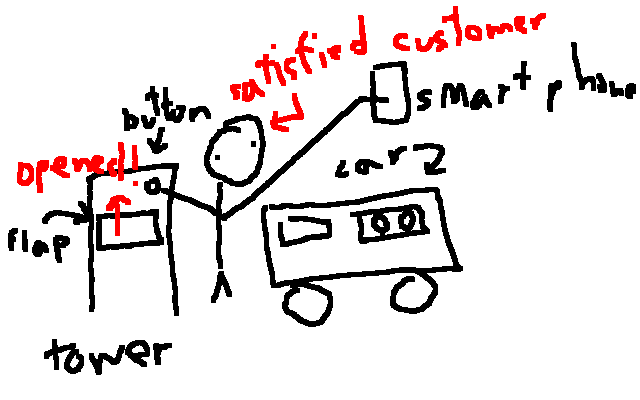 Plate #1 from my pending patent application.

Add a keypad to your stations.

When the user uses the app, you send them a random code (using an encrypted connection, of course) which needs to be typed into the pad within a few minutes to open it .

To make the system more user-friendly, you could alternatively allow the app to transmit the code via Bluethooth or NFC. But you should not rely on this, because not every mobile device supports these.

As a user, I find your process rather hostile. I have a regular phone, I have a tablet. I don't always drag them around with me. So I guess I will be avoiding your service.

What I do use is Esso's SpeedPass. RF keychain dongle that lives on my ignition key. As I have to remove the key to open the gas cap it's hugely convenient, also weatherproof and nearly indestructible. The interaction time is about 5 seconds.

If you are looking for a software solution to fit your present infrastructure, my opinion is your infrastructure is fundamentally flawed, thus no good solution exists.

On the plus side, RFID hardware is really cheap.

The owner of the app requesting a flap open is logged, and any subsequent damages are debted to him/her [option: unless immediately reported and investigated].

That ought to provide a strong incentive for people to

Also, it would be probably useful to display the QR-code of a station tower next the station itself. I mean, here I am in front of Baumgarten 17 power station, do I really have to run a georeferenced search to access the power station controls? I'm not advocating going to Bluetooth, but a QR-code looks like an efficient identifier for most models of phones.

It is probably possible to build on the above concept to ensure locality and user friendliness. Now I am advocating going Bluetooth (or short-range WiFi) all the way by adding e.g. an Arduino board or BlueFlea or Gumstix inside the recharge station.

At this point, no QR-code is necessary anymore.

It is still possible for a prankster to open all the flaps of a recharging station from behind the bushes fifty feet away, and leave them open to be vandalized. In that case, I guess the logs from the AP might be enough to file criminal charges.

An addition to Philipp's solution

According to which, you have added a keypad to the recharging station. Now: - the user with a smartphone can use the app and receive the unlock code via HTTPS. - an user without a smartphone (but with a common phone) can send a SMS detailing the station s/he wants unlocked, and receive back a SMS with the unlock code. I.e. you have now a second workflow which needs no app.

As I mention in comments I don't really know what bad outcome(s) you're trying to prevent, but:

This will inconvenience a few users, along the lines of "I left my phone at home, and needed to charge my car, so I called my phone. My spouse picked up, and I asked them to open the tower I need. Why did you stop this working, and how do I get my phone and my car into the same place at the same time given that my car battery is flat?". However, since it's for the user's protection and not that of the system, it doesn't have to be a block, it could just trigger an additional confirmation ("that tower is nowhere near you, are you sure you want to proceed?").

The only thing that distinguishes this case of a forgotten phone from abuse, is that the owner actually has the car and plans to charge it, so:

Edit, the threat you mentioned above suggests a particular scenario:

A mischievous user (by which I mean someone who wants to mess with the system, but isn't extracting money from it) tries to interfere with people opening flaps. So he sends an "open flap" message just as they're sending one of their own, or he spams the system with "open flap" messages, or whatever. This results in an innocent user doing one of two things:

The first thing might seem harmless, but leads to two problems:

Unless you can establish that only one user is genuinely close to the tower you cannot automatically adjudicate between the innocent and the malicious user, however you can:

Be aware also that the abuser needn't be 100 miles away. They could interfere with the innocent user while actually present. In fact they could be standing right near the tower using their phone, enjoying the confused look on the innocent users' faces as the tower fails to operate properly. Hopefully, however, they can't be close enough to tap their card/phone without the innocent user realizing what they're doing. Naturally you can't hope for your system to stop a malicious user who is willing to actually stand at the tower taking obvious actions to stop innocent users from accessing it -- that's a matter for the police...

Through the app you could

Use the phone location services. Only show stations that are in a certain range of the phone. This is also more user friendly as your station selection is going to be much easier when you actually want to charge.

If there is actual vandalism (as opposed to curious users that just try out a button on their phone), you could also:

Bonus points if you only ask them to confirm the number for stations they haven't been to yet.

I would simply use bluetooth to connect to the tower and disable control for all other users around while the phone is connected.

Almost every smartphone or tablet today has bluetooth. +User wouldn't need 3G. He could just drive to the station and open it using bluetooth.

Why is this even a problem?

Simply display to the user: "If you open a tower you are liable for any damage to the equipment until it is closed"

Just implement an option to close an accidentally opened flap, so you can sue the user and he can't bail out by claiming it was an accident.

and if you're billing anything for the service, you could also apply a "service-charge" if you open a tower and don't use it.

Not the answer you're looking for? Browse other questions tagged appsec physical or ask your own question.

24
How to protect against brute forcing
7
How to choose/compromise between data protection, and device recovery?
4
How to secure an application under iOS against jailbroken devices
4
how to secure Android Market public key
180
How is an ATM secure?
0
Locating a stolen device
2
Is it secure to make my Threema ID public?
3
Does Android have no protection against malicious public USB ports?
107
Defence methods against tailgating