Is it possible for a phone to be transmitting even while turned off and the battery removed?

Is it technically or theoretically possible for any part of a mobile phone's circuitry to be still on and transmitting even while turned off and the battery has been removed? If so, how?

I am thinking perhaps it could remain in a low power state and certain chips and capacitors could hold their charge for a while. Is this plausible or no?

If you have a phone with a removable main battery, you can try this: 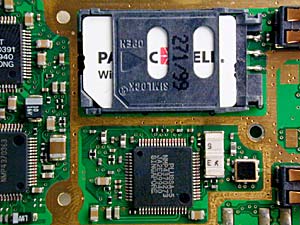 This HowStuffWorks article looks into the inside of a digital mobile phone. Quoting from the article: "As you can see in the picture above, the speaker is about the size of a dime and the microphone is no larger than the watch battery beside it. Speaking of the watch battery, this is used by the mobile phone's internal clock chip." This would be similar to the function of a CMOS battery in every PC/laptop. There is also a February 2010 patent mentioning a primary and secondary battery of different size and capacity: "The first battery may discharge during use of the mobile phone without simultaneous discharge of the second battery. Upon discharge of the first battery, the second battery may not be automatically activated."

A standard silver cell watch battery has a capacity of 200 mAh, a Zinc-air battery has a capacity of 620 mAh. From personal experience, my battery in my wristwatch has lasted for over a decade as it was just keeping the time, running alarms and the odd stopwatch. I am not certain which capacity the secondary battery is which is installed on most mobile phones but it could contain a newer, powerful one installed by the manufacturers. The design of mobile phones is typically a closed design. There is a new micro-battery that could fit in and power a credit-card-thin device and be charged 1,000 times faster than regular batteries. Therefore every time you charged your phone, it would charge the secondary battery as well.

When the phone is turned off and the main battery is removed, the secondary battery could do more than just keep track of the time. It is all connected to the same circuitry so it could leave certain chips powered on in a low power state, for example the GPS, the microphone, the camera, or the closed baseband processor on every mobile phone.

Now, hypothetically the secondary battery could be remotely activated and periodically do a burst transmission every x minutes and send GPS coordinates or microphone recordings back to your favourite 3 letter agency. If the chips were just passively transmitting, perhaps they need a StingRay or Reaper drone in the area to boost the signal. The cell tower itself may be powerful enough to pick up the signal.

This article states that the NSA can technically listen in to the microphone of an iPhone even if it is switched off. In Edward Snowden's conversations with Laura Poitras he advised her to put her mobile in the freezer. In Snowden's NBC interview he mentions "They can absolutely turn them on with the power turned off to the device". He even took out the main battery in his phone before a recent Wired interview. Removing the main battery may not be enough to avoid surveillance.

If I add a thick layer of tinfoil to my hat, perhaps everyone's mobile phones have been converted to an always on bugging and tracking device by NSA. They could have bugged every phone and home in the world whether their phones were turned on or not. You could get intel on anyone, anywhere. This could be why NSA does not allow mobile phones in their secure environments. It could activate every time it picks up speech then do a burst transmission at certain intervals. Maybe it only does that if you mention certain key words but maybe the phone does not have that capability with only the second battery running. Usually that analysis usually takes place in the basement of Fort Meade.

How would you potentially stop surveillance from our mobile phone even with the battery removed?

As Brill would say, "The more technology you use, the easier it is for them to track you."

There are also some theoretical transmissions types. One is listed here.

While most electronic devices do have some internal power sources (small batteries, capacitors, etc) other than the main battery, these sources are very limited in their uses and generally are only there to preserve vital data while transitioning to a long term 'power off' state. While these power soruces could technically and theoretically be exploited to send a few transmissions, this would require great skill and very customized work.

Also note that an attacker could potentially charge/power a device with static electricity and thus without it powered on or a battery even there. Here's an article.

You may be interested in this question as it deals a little bit with powering on unpowered devices.

So to answer your question, yes, but it is unlikely as it greatly relies on how the device and attack/vulnerability is set up.

Also, IMHO, this seems more like a physics question and less of a security question...

No, even with any internal capacitors or small secondary batteries, there isn't enough power to get off even a small amount of transmission. Transmission simply requires too much power, even for relatively short range given the type of transmitter in the phone.

It would be possible to design a system where the phone could receive a command to do something later if you were to use some type of transistor radio powered off the radio wave itself, but it would require a specialized device with specialized circuity to do this. (I suppose technically such a system could also have a specialized local low-power transmitter, such as NFC tag mode (not the phone mode that is normally supported by newer smartphones), but it wouldn't be communicating on the cell network then.)

So no, realistically this isn't possible unless you are given a specialized phone with hidden hardware in it to either provide large amounts of power or to allow specialized transmission, both of which would be easily identifiable from looking at the insides of the phone.

There are unpowered transmitters (or rather powered by the receiver), such as NFC and RFID tags, and with enough specialized hardware, it may be possible to read/send a very small amount of information (and repeat for a very low bandwidth communication), but these would be extremely limited without a battery or capacitor (note: while most capacitors do have a safety discharge circuit, not all do, and some are known to hold their charge a long period of time)

that said, physical location would be relatively easy to establish via triangulation with a couple high-powered receivers within range (~50 feet max?)

No. The radio(s) require power. Without radio(s) there is no transmitting. While it is quite possible for silicon circuitry to maintain state in the condition described they cannot transmit.

Not the answer you're looking for? Browse other questions tagged malware mobile phone rootkits smartphone or ask your own question.

1
Can a smartphone get hacked even when off?
55
Does the saying “physical access = game over” apply to smartphones, too?
42
Can a powered down cell phone be turned on remotely?
6
How can the NSA remotely turn on your iPhone?

5
Can a SIM card be tracked without cell phone and battery?
20
Is it possible to make a phone call appear to come from another phone, even to the network provider?
15
Skype called someone and connected to them with no action on my part. What do I do?
0
Can malware “upload” itself to the actual mobile base station and regain back to another phone?
4
How to prevent IoT devices from phoning home via the neighbor's wifi?
2
Could a computer turn itself on if the BIOS was modified even if it was turned off by holding the power button down?
6
Can the police track my phone even if I remove the SIM card?
1
Is it possible to track a SIM card even if the cell phone is turned off?
0
Android phone's lockscreen PIN disappeared?