I was just wondering, is that possible to implement RFID on ATM?

First, a note on terminology. Usually:

Now onto your question. It is certainly possible to perform a transaction with a contactless smartcard using the workflow you describe: first the card identifies itself, then the ATM queries the user for the transaction to perform and possibly validates it against a server, and at the end the ATM performs the transaction if the card is willing.

I don't know if there are ATMs that operate like that, but there are other types of machines that do. For example, to recharge a Paris transport pass, you put your card onto a reader tray (the round purple thing below the screen in the picture below), where it's kept in place, but you can take it off at any time, and the card can be in a wallet or other holder. Normally the card stays on the tray for the duration of the session; I think it does follow the two-phase system outlined above (first read the card information, then interact with the user, then upload the outcome of the transaction to the card). 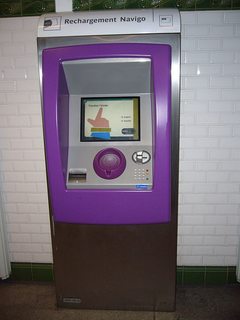 I remember seeing other transport pass machines where the interaction is closer to what your envision, with an initial swipe and a final swipe. The tray method allows longer interactions, which may be required when the card has to perform costly actions such as a signature, as well as continuous interactions, for example to validate a PIN or some transaction details.

Compared with the contact method, there is a practical usability advantage to the contactless method: the card doesn't have to be a card form factor, you can keep it inside a holder or in your wallet or handbag. In fact, the card doesn't have to be a card at all: the reader can also interact with an NFC-able phone that's emulating a card. I don't think double swipe has a usability advantage compared to a tray, but it may allow the machine to be smaller.

US ATMs operating off the magnetic stripe treat the credit/debit card as a simple memory: you insert the card once at the beginning of the transaction, and that's it. If an ATM is designed to follow the same procedure then a single, initial swipe would be sufficient. However smart cards allow more security than a simple memory since they can do things like generate one-time tokens (e.g. a signature for a given transaction) or validate a PIN and self-destruct after 3 attempts. This requires the card to be available at more times during the transaction.

European ATMs (designed for chip cards) swallow the card and release it at the end of the session. There are security benefits to this. This allows the card to remain swallowed if the user mistypes their PIN three times or if the card has been reported stolen. This also allows the ATM to verify the card form factor, which is the antithesis of contactless; the advantage of insisting on the form factor is that this makes it harder to fool the ATM into believing that the card is present. Relay shims that can be inserted into an ATM do exist but they took a few years to design. Thieves have an advantage if they don't need to bring the actual card to the ATM and can instead use a communication relay: they can use the card very quickly before it's reported stolen (maybe even without the owner noticing); and they can make themselves harder to trace and prosecute since the card thief may be in a different country from the ATM.

The upshot is that contactless ATM transactions are possible. The security afforded is intermediate between what you can achieve with a magnetic stripe and what contact chip card ATMs do. I don't know if there are contactless ATMs yet; the technology is pretty new, on a time scale for banking technology.

An RFID ATM card (using traditional RFID with one way communication) doesn't sound like a smart idea. If an attacker could get close enough, he could simply record the ID that the card broadcasts, and create a clone of your ATM card.

NFC, on the other hand, would be much more suitable. Since NFC supports two-way communications, the card can verify itself through some sort of challenge-response mechanism using a secret key that is never broadcasted.

Perhaps, as TildalWave suggested in his comment, NFC is not used in ATMs in order to retain their ability to "eat" your card. Another possible reason is inertia. Banks aren't always to quick to adapt new technologies, and may just not want to fiddle with a system that is "good enough".

Not the answer you're looking for? Browse other questions tagged access-control smartcard atm or ask your own question.

12
Why EMV cards cannot be cloned?

2
Keyboards with built in SmartCard reader. PIN/Password to unlock not via Computer
51
Detecting skimmers and other ATM traps
19
Do readers for the “Mifare DESFire EV1” smartcard really need to know the card's secret key in order to authenticate the card?
0
ATM skimming and cloning