How are Tor packets decrypted on the client?

I am a bit confused about packet decryption of Tor on the client.

I understand that if a client sends a request to a web server by using Tor, the request will be encrypted a couple of times, and sent to a Tor relay. The relay will decrypt a layer by using its private key, and when the request reaches to the exit node, eventually, it will be completely decrypted.

But the problem is, on the return path, answer to this question says that the same encryption way (I am also adding the image showing the concept below) is also used for the return path; So, when the packets reach to the client they will be encrypted. Without knowing the private keys of the relays, how will the client be able to decrypt received packets from the server? 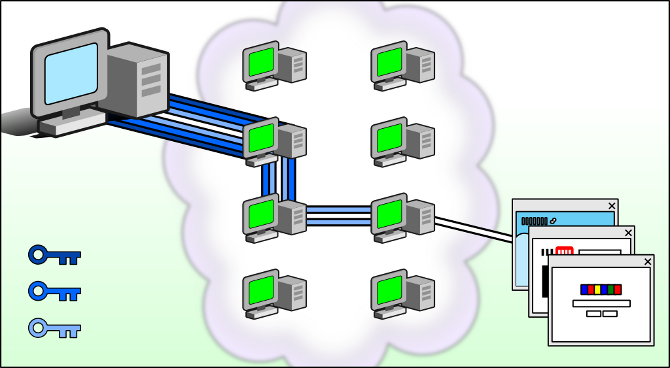 There is no need to know the key of the relays to decrypt the data they send back. TOR works the in the same way as SSL/TLS does: when you connect via HTTPS (HTTP over SSL/TLS) to a web server, you don't need to know the key of the server to decrypt the data you receive from it, this because during the SSL handshake phase, your browser and the server agreed on a symmetric encryption key that will subsequently be used with a symmetric-key cipher (e.g., AES). TOR works with the same principle, in some way it is like having three SSL connections one inside the other (although it is not exactly that...).

Not the answer you're looking for? Browse other questions tagged tor decryption or ask your own question.

46
How does Tor protect against an attacker just running thousands of nodes?
4
How are packets received by a Tor exit node routed back through the Tor circuit?
7
Can a malicious Tor exit node perform a HTTPS man-in-the-middle attack to see/modify your HTTPS traffic?
3
How does a Tor exit node know the public key of the client?
4
Decrypting TOR traffic?
7
Tor: same exact entry node since a week ago
5
The risk to Tor exit nodes
2
Why is the data from a Tor exit node not encrypted?
2
How does Tor preserve anonymity if it uses normal Internet Routing?