I'm learning about the Take-Grant Model and Access Control Matrix, and I have a couple of questions regarding leaking and the safety question.

These are the definitions I am using (see for example here [pdf]:)

So for example this: 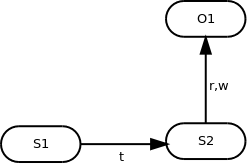 would not be safe, because S1 could get right r over O1 from S2, and thus there would be a right r where there was not one before?

In this case, a safe system would need to be designed like this?: 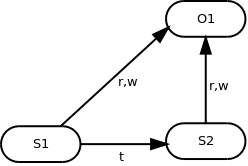 This would seem a little odd to me, because if that was the case, the take right (or the grant right) would not make that much sense (at least if one wants to create a safe system).

A: No. If you consider the execution right to behave like a take right, then yes, S1's reading rights over O1 have leaked to S2, because originally S2 had no rights over O1. But the papers i could find only showed that behavior when S2 had own rights over S1. Therefore, your example S1 rights would not leak to S2 because S2 did not have own rights over S1.

Q: "In the take-grant model, can a system only ever be safe if for every subject S1 that has right t over another subject S2 it also has all the rights S2 has over any objects and subjects?"

A: That is correct. Remember that, according to definitions 3-1 and 3-2 in the document you linked, the security of your system is calculated on a right-by-right basis. If you convert it to a Turing Machine, your system is considered safe when, given all the possible operations, starting from an initial state s0, it is not possible to achieve a state sN where a Subject has any right that it did not have originally. To put it clearer:

Is there an arbitrary sequence of commands that adds a generic right into a cell of the access matrix where it has not been in the initial configuration?

I think that the graph you created was not very didactic. If you're willing, the second link i post here gives a better notion of the available operations and the possible resulting graphs.

The third link references the original paper that described the Take-Grant model. In this paper, they use the name "call" in one of the described commands. You should note that this operation is related to the right of creating new nodes in a graph, it is not the concept of execution right we used above, ok?

Not the answer you're looking for? Browse other questions tagged access-control theory or ask your own question.

13
Given SSH access, what should I do to protect a server and monitor (dangerous) user actions?
4
BLP Lattice-structered system from Access Control Matrix
3
Covert Channels Exploit and the Bell-LaPadula MAC Model
0
Access control matrix and integrity
1
What kind of answer is this textbook question looking for in access control model?
1
Access control for embedded device
1
Why is the BLP access control model a mandatory one?
1
Why is linux filesystem considered DAC and not MAC