Is it possible the person sitting across from me at Starbucks was trying to hack my laptop?

I was using my laptop at a Starbucks on a table, and a person was using a laptop on the same table across from me, a couple seats to my side. He flicked some plastic thing across the table towards my laptop. What really freaked me out was he then actually flicked it again further to get it right in front of my laptop, behind my screen. The plastic thing was ring-shaped with a metal part on one end, which looked like the 30-pin iPhone charger. I've attached the basic shape. 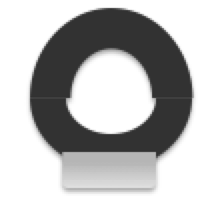 Does anyone think they might know what the plastic dongle could be and/or have any information that would suggest the person was trying to do something malicious?

No, you are just being paranoid.

You were probably already connected to him over WiFi. There are many attacks he could have run this way without additional devices. Also if he would have wanted to hack you, he would not have thrown his strange hacking device in your face. He would have hidden it below the table.

Most probably he was using one of these wireless chargers that are built into the tables. It certainly fits your description.

I don't know what that gizmo is, but unless you've got a really bizarre laptop, it wouldn't be useful for attacking your computer.

Outside of a laboratory setting, attacking a computer means using its standard input or output capabilities. An ordinary wifi or Bluetooth antenna can reach your laptop from anywhere in the room; a directional antenna can extend that reach to several buildings away. Very few computers have IR transceivers these days, but those are non-directional and reasonably long-range: an attacker just needs line-of-sight, not point-blank range. Spying on you by picking up signal leakage from your screen requires specialized equipment; to pick your screen out from all the screens a typical Starbucks requires a large, highly directional antenna best hidden in a van out in the parking lot.

Yes, there are coil-shaped antennas, but for the range you're talking about, a simple dipole will be far less conspicuous, and even a short length of wire will be sufficient.

As @cremefraiche said, the object fits the profile of an wireless iPod/iPhone charger. As the coil works as an antenna, it could theoretically be used to send data from the device.

To investigate if this device is charger or a surveillance bug, you can try to pry it open. If the 30-pin connector has anything else than the power-lines connected, it is possible that it can be used for wireless access to the device.

You can find the 30-pin connector pinout from here: http://pinouts.ru/CellularPhones-A-N/iPhone_connector_pinout.shtml

Although I agree with the other posters that the device in question probably was not a hack attempt, I disagree with their conclusion that he was not trying to hack you.

In fact, I recommend adopting the strategy that everybody is trying to hack your equipment. That sounds paranoid, but it leads to the type of security that is more difficult (i.e. non-trivial) to breach. Just because the man passed a funny device across the table, does not mean that he or somebody else, independently, isn't scanning your machine for vulnerabilities over the wifi network.

If your laptop has an RFID/NFC reader (some Dell laptops have them) then yes an antenna can be used to "talk" to the laptop and exploit a vulnerability in the reader's driver, but readers are usually placed near the touchpad rather than behind the laptop, and while this antenna can most likely send any data to the reader, I doubt it's sensitive enough to receive responses from the low-power reader through the screen (which has metal and interference-generating hardware in it); also I'm not aware of any vulnerabilities in Windows's card reader driver API.

TLDR: possible in theory, in practice you're just being too paranoid and if he really wanted to try and compromise you he could do that from a much longer range (Wi-Fi's indoor range).

The device looks like a FM antenna; there were also some 3G/LTE routers that look almost like that (now they're mostly soapbar or cube shaped, it seems). It has happened to me to be connected to a WiFi and a cell network, or run diagnostics on one while connected to the other. And fiddling with a cell antenna's position in the hope of getting better reception/bandwidth is a hallowed tradition.

That said, could have it been a hacking device? Yes. It's remotely possible. Not a WiFi though, for he would not have needed it any closer than several dozen yards, and not Bluetooth either (a couple of meters; much more with such a large antenna. "Cantennas" and "gun assemblies" have been reported allowing Bluetooth phreaking at hundreds of meters). NFC isn't a likely contender with a laptop. All the above, assuming we're not dealing with a moron -- of which there are many more than there are hackers, and whose M.O. is closer to stalking a Starbucks than a hacker's would be).

Was the donut shaped part upright, or parallel to the table? If the former, it could have been a short-range EM receiver possibly suitable for a Van Eck attack (also called TEMPEST attack). At short range it is possible to passively eavesdrop on LCD monitors and keyboards (sort of remote keylogging), and even CPUs. While the device described on Wikipedia had a range comparable to WiFi, it also costed in the neighbourhood of USD 2,000; a cheaper device with a range of less than one meter can be built with a tenth the expense.

2
Is there a way to identify the location of a person trying to intrude your wifi network? my wifi router is picking up his attempts
3
Is it possible to find the manufacturer of a BLE device from it's mac address?
1
Is it possible to hack into secured wifi and download with bit torrent from my IP address?