When do I use IPsec tunnel mode or transport mode?

I basically understand how tunnel mode and transport mode works, but I don't know when I should use one instead of another.

Among the two parties who want to communicate, if one computer B doesn't understand IPsec, I think they have to use tunnel mode, which puts original IP and payload into ESP and delivers the packet to a device near B who knows IPsec, and that device decrypts the packet and sends the decrypted packet to computer B.

(Try not to mention AH and so-called security gateway, I don't know what they are.)

Tunnel mode is most commonly used between gateways, or at an end-station to a gateway, the gateway acting as a proxy for the hosts behind it.

Transport mode is used between end-stations or between an end-station and a gateway, if the gateway is being treated as a host—for example, an encrypted Telnet session from a workstation to a router, in which the router is the actual destination.

So what ARE the differences:

Tunnel mode protects any internal routing info by encrypting the IP header of the ENTIRE packet. The original packet is encapsulated by a another set of IP headers.

Transport mode encrypts the payload and ESP trailer ONLY. IP header of the original packet is not encrypted.

Transport mode is usually with other tunneling protocols (GRE, L2TP) which is used to first encapsulate the IP data packet, then IPsec is used to protect the GRE/L2TP tunnel packets.

Here is a detailed read on the differences from Microsoft: http://technet.microsoft.com/en-us/library/cc757712%28v=ws.10%29.aspx

For example, if you had 2 public DMZ servers talking via Telnet over the Internet to each-other, and deeper in the network 2 IPsec routers were used to encrypt that specific traffic. Transport mode would be just fine in this case, since all parties have public IP's on their interfaces:

This allows the ISP to classify packets based on the IP packet's "Next Header" data, which would show as TCP. However, the TCP port would be hidden within the encrypted portion of the packet (the actual TCP header).

In that sense, the packet is vulnerable to attacker analysis, since he would at least know it's some kind of TCP session, and also would have the real IP's of the DMZ servers.

In IPSec transport mode, only the IP payload is encrypted, and the original IP headers are left intact. It also allows devices on the public network to see the final source and destination of the packet. With this capability, you can enable special processing in the intermediate network based on the information in the IP header. However, the Layer 4 header will be encrypted, limiting the examination of the packet. Unfortunately, by passing the IP header in the clear, transport mode allows an attacker to perform some traffic analysis. 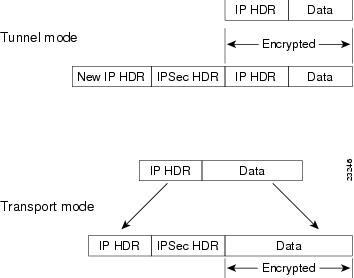 Having quoted that, this is almost never the case - the underlying payload is most often a tunnelling protocol (e.g. L2TP in case of Windows or mobile clients, could be GRE), so in modern networking terms there are "mitigating" factors against traffic analysis in transport mode.

0
What is the difference between tunnel mode and transport mode in IPSec?

4
IPSec AH + ESP used together
5
Encryption of headers in IPsec tunnel mode
1
Is it possible to use AH in transport mode on an IPSec channel with mediation?
0
IPSEC - Remote Access Clients, Tunnel or Transport Mode?
4
Why L2TP is required over IPSec
2
Does AH in tunneling mode provide encryption?
4
Is there any real-world use of IPsec modes other than ESP tunnel?
2
How to use IPsec Transport mode between two gateways
0
Trying to understand transport-mode IPSec and VPNs