About onion packet and onion routing?

I was just wondering if anyone has a diagram showing what is encrypted inside an onion packet when it leaves the sender?

When a Tor client sends the packet out, wouldn't the entry onion node know send real IP address? When reply traffic comes, what is the destination address for the traffic when it leaves the server?

The image below shows how a packet is encrypted, and sent through the network. 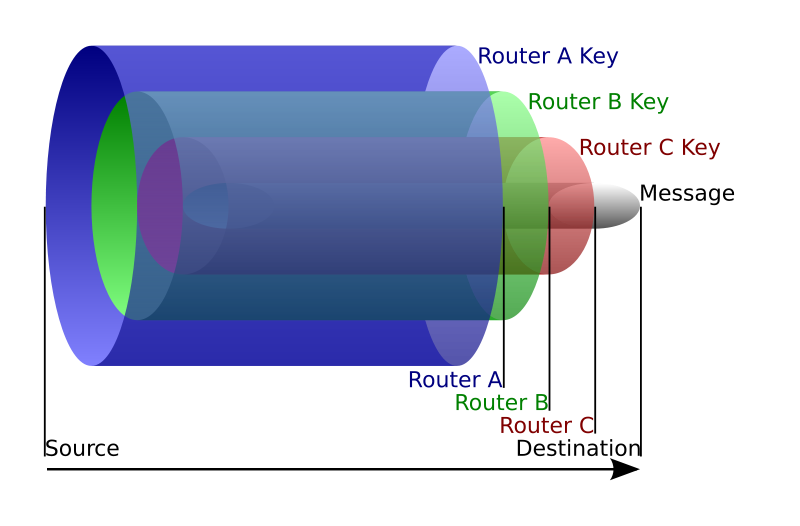 From the Tor Project

The client negotiates a separate set of encryption keys for each hop along the circuit to ensure that each hop can't trace these connections as they pass through.

Before a packet is sent, it is encrypted with C's then B's then A's encryption key. When the message reaches router A it decrypts its layer, and forwards the rest to router B. Router A only know that the message needs to go to router B, and that it came from the client. It cannot see any other IP information.

To address questions in your comments
If an Entry Node is compromised then it can reveal the source's IP address. But it will only know the next node in the circuit. Without some type of relationship to the destination the anonymity stays intact.

The Exit Node never seeds the original source address, and uses its own IP for communication with the end destination.

For more info look at the original Tor design paper.

Not the answer you're looking for? Browse other questions tagged tor onion-routing or ask your own question.

14
Onion routing vs crowds
3
In depth TOR encryption design details
2
Why do tor nodes maintain TLS keys with all other Tor nodes?

5
Could TOR nodes collect IPs and filter them to unmask .onion url IP addresses?
3
How is a Tor hidden service immune to exit node attacks?
0
TOR communication from exit to origin
1
Is the size of a packet sent through a Tor circuit consistent?
2
How does Tor preserve anonymity if it uses normal Internet Routing?
1
Onion Routing Network: Analyzing the size of the encrypted message to determine distance along a circuit
1
How is Tor's exit node safe?
2
What is extra 3 relays in .onion in Tor connection