Burp suite - trying all parameters such as numbers|numbers

How do I configure burp to try all possible values? (Would this be the intruder tool?)

You can set up that payload set within the Burp Intruders options. 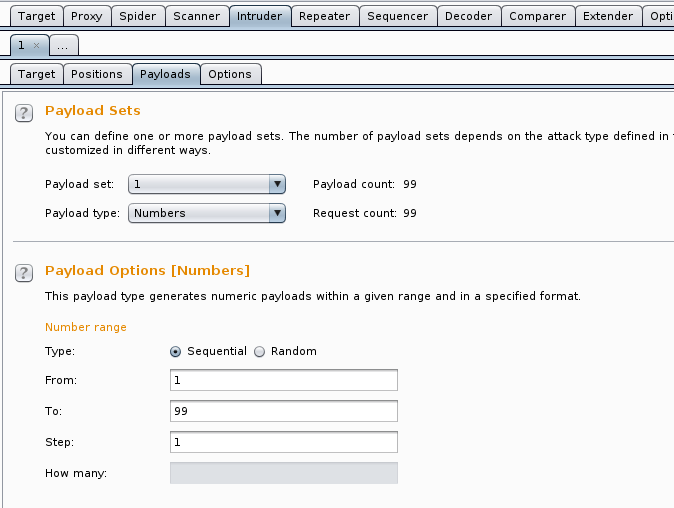 For the described scenario with two independent sets for the two positions you should use the "Cluster Bomb" attack type. Then you define two payload sets (one from 1 to 99, the other one from 1 to 999) as described above.

That will iterate through all combinations for payload set 1 while keeping the first element of the second payload set:
1|1
2|1
...
99|1

Then the intruder will choose the next item from payload set 2 and iterate through all of set 1 again until every combination was tested.
1|2
2|2
...
99|999

Edit: Forgot to said that you should also check the "Attack type" in the "Positions" tab to fit it to the request you want to perform. Read about the attack types here: http://portswigger.net/burp/help/intruder_positions.html#attacktype (The attack type is just how Burp is going to handle the payloads in the requests).

This code will generate those numbers for you. I'm hoping this will help. Thank you.

This snippet will echo those numbers, just run in Cygwin or your Unix shell. Chmod to 755

Not the answer you're looking for? Browse other questions tagged burp-suite tampering or ask your own question.

4
Burpsuite Pro: CSRF tokens in sequencer
5
Some specific website not loading when proxy through Burp
4
How to use Burp macros to pass parameters to intruder
3
Burp suite interception bypass
2
Burp not intercepting the intended traffic
2
Burp Suite - Use \n in repeater
2
Intercepting TCP traffic through MITM attack
1
Why intruder number of threads has an effect on the time delay of indiviual requests