Several dominant software vendors distribute updates over HTTP or over HTTPS with bad certificates. In general, it doesn't seem like I can expect to rely on a secure channel to ensure that an installer is not tampered with in transit.

It looks like all of the installers have valid signatures. This is a typical screen when I check the properties of an installer file: 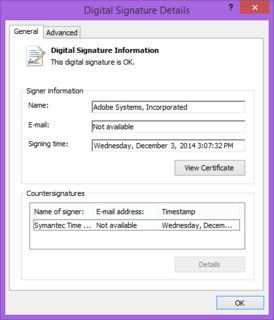 The operative part of the dialog box is "This digital signature is OK." What is not clear is what portion of the file the signature is attesting to. You would expect this to be all of the file, but I haven't found a statement from Microsoft confirming that. I also vaguely recall a tweet rumoring that only parts of a file are attested to by a code signing signature.

The signature is of a hash of the portion of the executable before the code signing block. Best practice is to have both the installer and the application signed.

You can study some details by looking at this:
https://msdn.microsoft.com/en-us/library/windows/hardware/gg463180.aspx

EDIT: OK, now that I'm off the mobile device and on a real keyboard, I can elaborate.

As noted in the document to which I referred you, the hash that gets signed is generated as to the entire executable file except for two excluded portions (a) the total file checksum; and (b) the certificate tables. These cannot be incorporated into the hashing because of the chicken or egg problem (e.g., these fields are dependent on the content of the attribute certificate table, and thus their values are not fixed until the certificates/signatures are prepared and appended).

As for the attack surface/scenarios, we see once again why it is so important to have good crypto primitives, and ALSO to use best practices. I suppose that in theory an attacker could create a malicious version of a software application, and then roll it into an installer and include some carefully calculated data to generate a hash collision with an existing real MD5 certificate from the application vendor, attaching that existing certificate/signature to the compromised executable. If you only checked the installer you might get fooled. This is why MD5 cannot be trusted for this sort of application anymore. It is also why, in addition to checking the installer, you should check the application program itself.

Windows 7 accepted MD5 hashes for code signing, whereas Windows 8 and up requires SHA1 or better. (For what it's worth, I dug around my program files and old installers just now and only found one from 2008 or so that used MD5 for the signature hash. 2nd edit: I take that back, I also found a relatively recent version of Winzip using MD5).

I hoped that the answer is yes, but unfortunately, no!

Proof: take a Firefox Installer.exe downloaded from mozilla.org (327 KB as of today), open it with a HEX editor, modify a few bytes around offset 328630. Save. Check: This digital signature is OK!

For more information see How can a .exe be modified and still keep a valid digital signature? and Each Firefox download has a unique identifier

I also thought this was true (taken from the accepted answer):

The signature is of a hash of the portion of the executable before the code signing block.

but the linked question proves this is unfortunately false.

The latter is used to start the TLS transactions and exchange a shared key for symmetric encryption of the current session. If the handshake is able to complete, it means that the site you are communicating with owns a copy of the private key related to the certificate. But, if there is a mismatch of the domain name on the certificate and the address you are connecting to, it could mean:

In conclusion, such a mismatch should lead to rejection of the communication as you have no means to ensure to with whom you are talking to.

Not the answer you're looking for? Browse other questions tagged windows code-signing or ask your own question.

6
How can a .exe be modified and still keep a valid digital signature?

1
How does a code signing vender charge for creating certificate chains?
0
How to share EV Code Signing Certificate with USB token with other developers?
8
Where to put a code signing server with EV code signing certificate and plugged-in HSM
0
How can we verify an installer's validity by checking its signature?
1
Why infamous Addtrust certificate is still not expired (same private key) for code signing?
4
How to validate client side safety in a Zero Knowlegde model