I seek guidance on interesting issue. Recently I've been searching for password alternatives, not because of the security, but to be more user-friendly.

In one of my projects user receives 128 bits base64 encoded salt as security token, which could be safely transmitted over social networks, messengers, sms, etc. When user decides to perform certain actions, he enters this public salt alongside with secret passphrase. Now, this 22 random character salt looks unpleasant and raw for the end user, it's difficult to distinguish one security token from another (user can have many), but easy to send, as it is just a string.

My general idea is to:

Searched all around for answer. Would greatly appreciate any help.

I've found an example on Defuse Security, that generally reflects the scheme that is implemented in my project: 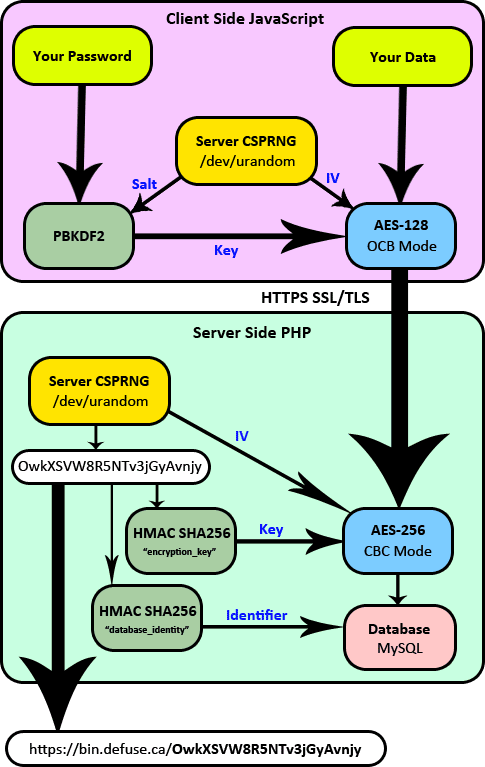 As a result of the encryption process, end-user gets link, and path is actually represents salt - OwkXSVW8R5NTv3jGyAvnjy. This is the ugly stuff I want to transform into image, so it will be secured but still easily distinguishable for users, so my questions remain relevant.

Hope this will help to find out how.

I believe that question is misunderstood.

But the problem is, salt is not user-friendly, it looks heavy, and it's hard to distinguish multiple such salts at a glance. With that I think what salt can be transformed to that will look and feel good. For example, like Google ReCaptcha of version 1 and version 2 - it accomplishes same task, but simple click is more user-friendly than entering some symbols from picture.

I don't want to be annoying with that question, but please, just accept the fact that I'm not inventing my own salt derivation mechanism or security system.

I believe you're confusing the purpose of a salt. You can derive a salt from an infinite amount of ways, but that doesn't change the purpose of the salt. And for the salt's purpose, it need not be secret.

So when reviewing critiques on your salt derivation, just understand that you're getting this feedback based on the purpose of the salt.

Keeping that in mind, its fun to experiment and be creative with custom authentication schemes, but these schemes have not been hardened or analyzed for weaknesses, and for that reason, they should not be used in a production application.

The security industry is sort of like the FDA. It's not that you can't make a new, effective, safe drug, it's just that yours hasn't passed inspections. Inspections are costly, and if the problem is already a solved problem, we can't be arsed to inspect yours.

And that is why we generally respond, unfortunately in a brash way, of don't roll your own security. It's a solved problem.

The main issue with using files instead of passwords is that it changes the philosophy of the whole thing.

A file is something you have while a password is something you know. These are not the same thing. Therefore, you cannot replace one with the other without critically evaluating your entire security scheme.

If your authentication is based on a non-secret username (or an e-mail), the account security now rests entirely with a file that can be copied, stolen or lost. Not that passwords can't get spied, keylogged, or forgotten - but again these are not the same things. One important difference is that even if you steel my notebook or my phone, my passwords aren't there. But your security token files would be.

If you are interested in looking at an already established method that is similar to what you are suggesting: Dell Secure Works already uses a QR code for first time authentication for new users. After registering on their site and downloading a certificate, they then create a QR code that, in coordination with Duo Mobile, requires you to read the QR code with your smart phone and then Duo Mobile generates a code based on that QR code for you to enter.

The salt itself is used as an addendum to the password such that the ciphertext of the password is resistant to the usual cracking attempts that use well known words & phrases to lower the keysize, which is why the salt is a random string of some sort. In any case, what this means is, you could base the salt on anything, images, b64 encoded encoded word files, but the caveat here is the use of a recognisable image as a salt might confuse a user that the image is an indication of some kind of validity/seal, other than the fact that it should be entirely random.

Not the answer you're looking for? Browse other questions tagged passwords salt user-interface or ask your own question.

22
Where is the salt on the OpenSSL AES encryption?
43
Is salting a hash really as secure as common knowledge implies?
3
where to store the salt for "crypto_pwhash" in a web application with no local storage
3
Storing Password Hash plaintext
1
Authentication over SSL using hash and salt
3
Any reason to send a user a session salt?
1
What are the security risks associated with generating a security string as a string rather than an image?