Does this image contain secret data?

I am analysing big, cloud-based application. During analysis I found that one of the biggest files (>3 MB) used in this app is a very small (16x16) icon.png file.

Further analysis revealed that the file contains over 60000 lines of metadata, consisting mostly of <rdf:li> tags inside <photoshop:DocumentAncestors> tag. Here is an example:

How can I check if this metadata was placed here "naturally" or it contains some hiddent data?

Looks like this metadata lists document IDs that were used during creation of the file. You can check this article: http://www.hackerfactor.com/blog/index.php?/archives/2013/05/23.html, search for the "Ancestors" section.

So, it contains technical metadata which could be placed there 'naturally' by the Adobe applications.

I believe everything I've linked is safe. Sorry for the format, I'll try to fix this when I can.

Here are some candidates with similarly large metadata counts. Report links come from Googling "Excessive number of items for * DocumentAncestors" (which comes from exiftool, apparently used by VirusTotal).

A histogram from the "samsung" sample (I quickly split out each byte of 107,000 entries, sorted and sent them through 'uniq') may be of limited utility, except to show that the bytes aren't completely random. This may be expected given how some operations are probably encoded, but I was assuming a programming error that generated purely random UUIDs. This isn't the prettiest picture so I can work on that. Decimal 17 (0x11) is the large spike at bottom. 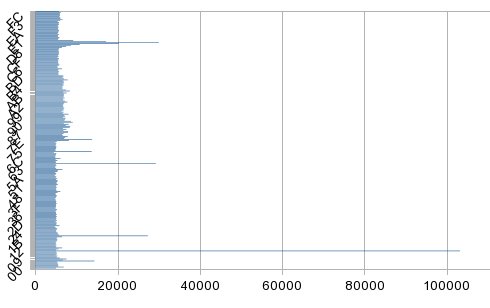 I tried some experiments to see if there might be some encoded data (also the point of the histogram) but have mostly approached it as just metadata generated while a file is processed.

Here are some additional pursuits:

Another forum post at Adobe Photoshop CC is creating problematic JPEGs that make OSX Preview.app lose its mind with a linked file (Note4Cover1.jpg) that's just as large but not as nicely formatted inside.

Someone else with an excessive number of items, I think this link suggests how to remove the extra data (warning that it may remove stuff you want):

A caveat: I found that opening and saving with a new name using GIMP removed the data regardless of the checkboxes being set to save it. It seems like that's not supposed to happen according to the standards linked by other answers here.

And finally, differ (differ.readthedocs.org) is an image reporting library. I haven't evaluated it because while it looks useful and dumps stats from may tools (like exiftool and imagemagick) it might be a little tricky to set up (github). It still might be useful for forensic data.

Not the answer you're looking for? Browse other questions tagged steganography or ask your own question.

15
Is Steganography a safe method to store secret data?
7
Which graphic image formats contain revision history? Does the image editing software being used matter?
1
How do I hide files inside an image without using any steganography tools?
7
Image steganography and tracking
3
Protect hidden message in image from manipulations
0
How to track the usage of image